Home Aston Villa When Terry met Steve: The most painful of rom-coms 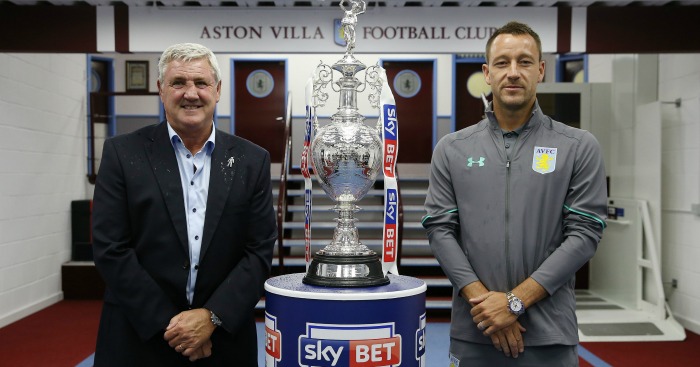 It may not remain the defining image of John Terry’s Aston Villa career, but it will do for now. After Reading scored their second goal on Tuesday evening, Terry stamped his feet in frustration – a piece of performance art depicting a man becoming increasingly aware of his body’s own limitations.

Three days earlier at Cardiff, the Birmingham Mail nailed ‘John Terry at Villa: A novel’ in 21 words: ‘Caught out a few times by Zohore who ran Villa ragged. Won headers and tried to rally the troops in vain’. Headers? Check. Troop rallying? Check. Caught out? Check. Plenty of effort but with very little positive effect? Check, check and check.

Still, Terry wanted a challenge. When people were falling over themselves to praise him for dropping down to the Championship, it was because he had taken the difficult, rather than easy, route to retirement. In reality, he had taken one of his only available routes. There were no offers forthcoming from MLS, and no Premier League club was prepared to offer regular first-team football and £60,000 a week in combination.

Defenders of the move argue that Villa’s owner Tony Xia is worth a reported £990m, so £60,000 a week is equivalent to our pocket change. Yet Steve Bruce is quickly learning that it is impossible to make a statement signing and then expect it not to make a statement when it goes wrong; he has tied an expensive brick to his leg before attempting to swim in the deep end. Villa, the pre-season second favourites for promotion, now sit 23rd in the Championship.

This isn’t just about Terry the central defender, you understand. He has not yet been truly awful, although his capacity for a 46-game Championship season is in serious doubt. Terry turns 37 in December; only three outfield players aged 37 or older played in the Championship last season. The youngest of those was Wes Brown, who started three matches – all defeats – in Blackburn Rovers’ relegation campaign and was this week unveiled by India’s Kerala Blasters.

No, this is less about Terry and more about Terry and Bruce, fused together as a symbiotic pair with a responsibility to each other to make this work. It’s like every budget Hollywood romcom you instantly regretted watching.

With the pressure growing on Bruce, his response to defeat at Reading was to pass the buck onto supporters who he believes “got caught up in the euphoria” of Terry’s arrival, a gross misjudgment on two levels.

Firstly, it was a struggle to find any Aston Villa fan who was jumping with delight at the arrival of a 36-year-old former England captain with no match fitness and a history of unsavoury incidents.

Secondly, it was Bruce and Xia themselves who were the most vocal cheerleaders for Terry’s signing, frotting themselves into a frenzy of self-congratulation. ‘Hey guys, look who we have landed! You might remember him from such things as That Night In Moscow, The Court Case and Chest-Beating: A Two-Step Guide.’

It is increasingly apparent that Bruce got sucked into the Terry retro-amnesis, delighting over the name rather than the player. This was the type of signing he could never manage at his previous, unfashionable clubs. He took the fact that Terry wanted to sign for him now as a testament to him as a manager and Villa as a club, when really it was all about Terry’s descent.

This was a fight for managerial relevance by a man who has suffered the sharpest of declines since being interviewed for the England job 13 months ago, paying the highest wages outside any top flight anywhere in the world for a 36-year-old in a position for which Villa already had options. They sold Nathan Baker to make room for Terry and Chris Samba, also on significant wages. Plenty of supporters would have been happy sticking with their lot.

Making conclusions three games into a new season is dangerous, but there are valid reasons to believe that patience in Bruce is already running out. He has won eight of his 25 league matches in 2017, and two of those beaten teams are now playing in League One. Bruce was booed by visiting supporters during the second half on Tuesday.

Bruce’s response to this latest defeat is more alarming still, publicly insisting that he needs another striker before widespread reports claimed he is keen on a big-money, permanent move for Jack Wilshere. This is a club that have spent £32m on strikers since relegation, and Bruce himself has spent £23m on nine new players in his ten months in charge. And now he wants another forward and the talented but brittle and expensive Wilshere? Whatever happened to coaching, improving and developing players?

Bruce’s desperation for added investment belies his grim realisation that this simply has to work out. Having missed out on England and then walked out of Hull, he viewed Villa as the perfect place to begin his route back to the Premier League. Even on the eve of the season, Bruce spoke about top-flight consolidation and FA Cup finals.

For Villa, Bruce was the safe bet after the expensive, expansive failures of Tim Sherwood, Remi Garde and Roberto di Matteo. The parachute payments will soon run out, and move Villa closer to the reality of life without the financial blanket of the Premier League. They appointed the Championship promotion expert. If he can’t guarantee the promotion – or even come close – what does he have left on his CV?

There are few squads in the Championship with better players or bigger budgets than Villa, but there are clubs and managers being smarter. It is not a case that this is no country for old men, for Neil Warnock and Mick McCarthy continue to hold their own, but throwing money at the problem is simply no guarantee of success, merely impatience. Bruce and Terry, dancing slowly to their own clunky tune, are threatening to take each other down.