Home F365 Features Where is the XI that ended 22 years of Toulon hurt now? 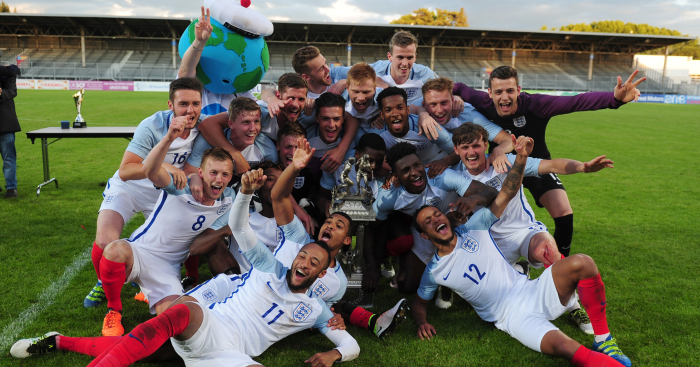 Ruben Loftus-Cheek looks set to start for England against Panama on Sunday to earn what will be his fifth cap. Two years ago, the Chelsea midfielder scored the winner for Gareth Southgate’s Under-21s in the final of the 2016 Toulon Tournament. Loftus-Cheek also won player of the tournament in what was the Three Lions’ first Toulon triumph in 22 years and the first of three consecutive titles. Here’s what became of the rest of Southgate’s XI…

Jordan Pickford: The then-Sunderland keeper had only two Premier League appearances under his belt by the time the 2016 Toulon Tournament came around, but he had already played in the top five tiers of English football. Two years later, Pickford is a £30million stopper and England’s No.1.

Dominic Iorfa: The Wolves full-back had played a full season in the Championship as a 19-year-old when he won the Toulon Tournament but he has since become one of the casualties of the Premier League new boys’ big-spending approach. He spent last season on loan at Ipswich and is likely to be shipped out again ahead of the final year of his contract at Molineux.

Matt Targett: The Southampton defender had 20 Premier League appearances when he left for the Toulon Tournament but, now 22, he’s made only seven more in the two years since. A loan spell at Fulham during their fantastic run to promotion via the play-offs appears to have reminded Saints what Targett can do, with Mark Hughes said to be keen to keep the left-back despite the Cottagers’ interest in a permanent deal.

Calum Chambers: The centre-half already had three senior caps to his name having joined Arsenal for £16million in 2014. Chambers failed to push on and was loaned to Middlesbrough for a season after the Toulon Tournament but Unai Emery is reportedly still keen to have a look at the former Saints youngster.

Kourtney Hause: Like Iorfa, Hause is another victim of the Wolves revolution. The former Gillingham defender managed only seven minutes of action in their Championship-winning campaign but the 22-year-old has recently been handed a three-year contract extension.

Nathaniel Chalobah: Having spent the previous season at Napoli – his sixth loan spell – Chalobah hoped to finally push on at Chelsea after the Toulon triumph. But he made only one Premier League start, which came after the title was sealed and made up 79 of the 159 minutes he was given all campaign. The 23-year-old opted to join Watford last summer but a knee injury kept him out for nine months until the final day of the season. Chalobah is currently the second-highest caps holder ever for the Under-21s behind James Milner.

James Ward-Prowse: The midfielder had four seasons around the Southampton first team under his belt when he captained England at the Toulon Tournament. He has played 30 Premier League games in each of the two seasons since and made his senior debut against Germany in March the following year. Mauricio Pochettino is a big fan.

Duncan Watmore: Poor Duncan. The Sunderland attacker has played only 23 first-team games since the Toulon Tournament due to two season-ending knee injuries in successive years. The Black Cats certainly missed him. Fitness permitting, the 24-year-old will be the best player in League One this coming season.

Lewis Baker: The midfielder, who spent the seasons either side of the Toulon Tournament on loan at Vitesse, scored the opener in the final and finished with the Golden Boot. Baker was sent to Middlesborough last season but saw only 31 minutes of Championship action since mid-October. Under contract at Chelsea for another four years.

Ruben Loftus-Cheek: The first Englishman to win Player of the Tournament at Toulon since Alan Shearer in 1991 managed only 30 minutes in the Premier League during Chelsea’s 2016/17 title-winning campaign before an impressive loan spell at Palace last term. His cameo against Tunisia led Joey Barton to suggest he could do for England this year what Gazza did at Italia ’90. No pressure, then…

Nathan Redmond: Third and fourth on the list of England Under-21 caps and goals respectively, Redmond had squeezed a lot into his career prior to the Toulon Tournament, with two seasons in the Premier League and three in the Championship before Southampton paid around £10million for the winger upon his return from France. In and out of Saints’ XI last season after winning his first senior cap in 2017 against Germany.