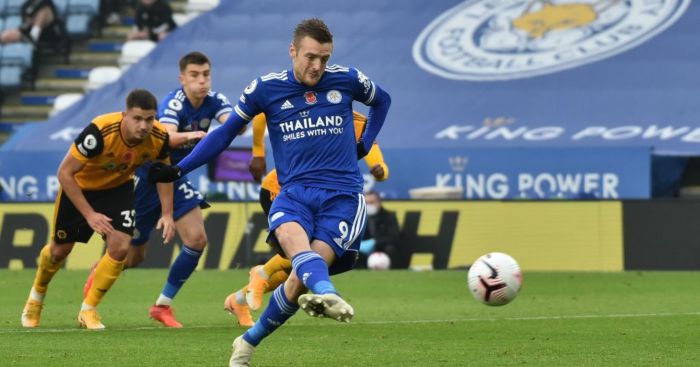 Send your thoughts on Man Utd, Leicester and penalties to theeditor@football365.com…

Complete domination
Is Fabinho a better centre back than Matip?

9 injuries and we play like that? Wow!! Complete domination.

Our main challengers (City, Leicester, Spurs, Chelsea and Villa) just don’t look like they can keep this going. I just hope Man Utd don’t go down, the league would be poorer without them.
Jim (soon to leave Spain)

Where’s the outrage about Leicester?
I thought I’d write in about penalties. It does seem Man United get a lot of penalties so I thought I’d look.

So they are joint second in the league so far for penalties awarded with Liverpool and Chelsea with 4. Just one more than the likes of Fulham, Newcastle and Sheff United. Doesn’t scream big club bias.

Leicester on the other hand have been awarded 8 and already over half way to the record total with just a quarter of the season gone. Where’s the outrage about Leicester?

Also Fernandes always scores the most penalties. He’s 3rd on the list on 3 behind Salah (4) and Vardy (5). Again not quite what people are getting upset about.

Finally the record number of penalties scored in a season is 85 in 2009/2010. So far with around a quarter of the season gone we’re on 35. If this trend continues we’ll finish around 140!

So in conclusion penalties in the modern game are given far more readily and easily so we just have to accept that and realise no club gets preferential treatment.
Bradley (Yes I know, facts wont stop people) Kirrage

How come small Fulham get 3 penalties in 3 games? Are refs biased only against small West Bromwich? Is it only a conspiracy when they’re awarded to Big Man United or Big Liverpool?
Manyooligan (Note to Scott Parker: Mitrovic is your number one penalty taker, stick with him. No need to change after every missed kick. Thank me later) SoC

My opinion has nothing to do my jerking knee
There are now three certainties in the world today… Death. Taxes and Man utd winning a penalty.

Man city are out of the Title race.Cant see Them finishing above all  four Challengers for the title. Chelsea, Spurs,Liverpool, Leicester. More likely one of those will finish above City.

Not yet clear how much Liverpool’s injury crises will effect their challenge we will run out of players eventually…. Chelsea and spurs giving the neutrals what they want an open title race. last thing this sad season needed was a one horse title race.
DonP LFC

Mourinho’s mental warfare…
In the beginning when I was lauding the man that is Mourinho when doubts were developing, one of the reasons was because of his use of mind-games. The fact that he seeks out an edge off the pitch against an opponent as well as on it. When he started his comments on Sterling, I was pretty sure Pep wouldn’t take the bait and do as he did the last time when Mourinho was claiming KDB wasn’t injured and that he was to play, while Pep was saying he was injured, though he would play him the next day and did impress against Mou.

Doherty was a victim of the virus and so Mourinho was aware he had to play Aurier someone who is miserably lacking in defensive capability. Everyone would agree Sterling is among the most devastating forwards in the league and so by removing him and making sure an inexperienced Torres starts in a big game against you was the beginning of victory.

Pep got played and the fact that he said on the pre-match interview that Sterling was fit is even more damaging. By the time Sterling was on the pitch the game was already lost with Aurier not even close to being exploited.

This game tends to trawl the lowest-common denominator who are little more than lemmings that follow the shoutiest agenda. The latest episode from Arsenal fans follows an oft-repeated mantra.

“We need to spend money! MAH-NEY!”

Partey, Gabriel, Pepe, Aubamayang, Lacazette, Kieran Tierney, Torreira, and giving Willian and Ozil THOSE wages, is not money? That is 300-400 mil for 3 seasons – wow.

Whatever happened to coaching, talent-spotting, developing youth, having tactics, having a long-term strategy, you know, running it like a real club?

Football problems are like the world’s problems. It has to be solved with ingenuity, insights, understanding, fearlessness and some money.

4 points in relation to your email.

1. We’re 8-9 games in. That’s a quarter of the way through the season. Let’s reassess after Christmas shall we? You know, that’s the time we always look to the table, when half the season is done.

2. Ole, frankly, is a bag of w*nk as a manger. His tactical nous often amounts to nothing more than “playing the utd way” but on the grounds of this weekends action, that way is struggling to beat West Brom, relying on getting a legit pen overturned. He has about as much acumen as Goldbridge playing FIFA. Really looking forward to seeing Sandro Tonali getting signed as Woodward’s mate’s kid told him he develops into a great player on the new FM 21 beta.

3. Don’t focus too much on another team’s signings not working out. People in glass houses shouldn’t throw stones. At least Arsenal were actually able to sign a player…

4. You might want to shy away from the “Saint Pep” line. What has Ole actually done other than throw a kettle over a pub? Pep, it is worth remembering, still has the record points total in a season.
Sam, LFC, (Remember brackets? They used to be a thing) North Yorks

Flopping hard…
I wanted to talk about curious case of Nicolas Pepe at Arsenal. I’m genuinely stunned at how little seems to have been made about hard he has flopped since his big money arrival.

Pepe is the joint 5th most expensive player in Premier League history according to Transfermarkt, arriving at Arsenal for a club record fee of over £70m, and in his time at the club he has achieved the square root of bugger all. Frequently on the bench, offering next to nothing when he starts, you’d expect a massive furore in the media and online about how badly it has gone yet it seems to garner little attention, and I can’t work out why.

It would be understandable if he arrived as a 20yo, and his indifferent/inconsistent performances could be chalked up to developing his potential, but he’s 25, and should be at the peak of his career. Why so little fuss? And why did they shell out so much in the first place? It’s not like they were competing in a bidding war with Europe’s great and good to land him. It’s all very odd.
Lewis, Busby

He just seems like a fantastic, ultra professional, dedicated, superb addition and all round genuine good bloke in any team.

I love they have named a door after him

He also need the freedom of the City (you can pick which one) maybe a knighthood to services to football is a bit much but this man is ridiculous,

He can and does play anywhere, commentary Sunday night said “except in goal” but I reckon he’d give you a bloody good shift there is needed too.

Surely he is the best free signing of all time anywhere for anyone?

If anyone can tell me why they dont like him, as a man / player, then I would happily (ignore them) listen

I was def worried prior to that game but yet again, Jurgen proved I know nothing about it..
Al – LFC (Loving the fighting over who is the least rubbish Manchester team / manager in the mailbox)

What’s in a name?
Dear Editor,

I was so pleased to see Phil, Dublin and Mike, Leeds call this out.

Absolutely a pet peeve. For me it has to be Jamie Carragher’s pronounciation of De Bruyne. He flatly refuses to accept it. Even when the two other co-coms are saying it completely differently.

Please, Jamie, stop it. Or I suggest we hereby go with Jamie Carriage-her. See how he likes it.

Thanks for allowing me to get this off my chest.
Marc

David Coote…
I’m not sure if this was covered much in the build up or aftermath of this weekend’s games but the referee David Coote was originally assigned to do VAR at the Liverpool v Leicester game.  Coote is the guy who was on VAR and failed to intervene to send off Pickford for the van Dijk challenge and ruled out a late Henderson winner in the Merseyside derby.  Liverpool’s vast fan base went into melt down that he was being assigned VAR in one of their games again and the allocation of officials was changed because of this and Coote reffed the Man U v West brom game……a game in which he overturned his decision to give West brom a penalty in what was surely not a ‘clear and obvious error’ of his own.  Two things, how can the referee’s association let themselves be influenced by the fans as to which officials take charge of their games.  That is a dangerous precedent to set – although as we know with officials in this country, precedent is not really something they abide by.Secondly, how many times this season has a ref been asked to go to the monitor and actually stuck by his original decision?  When he’s asked to go to the monitor the immediate thought must be one of my colleagues has seen replays from multiple angles and believes I’ve made a mistake.  It seems that the whole clear and obvious error mandate has been completely forgotten.
Rich, AFC