Home F365 Features Which Big Six Premier League side has the strongest squad? 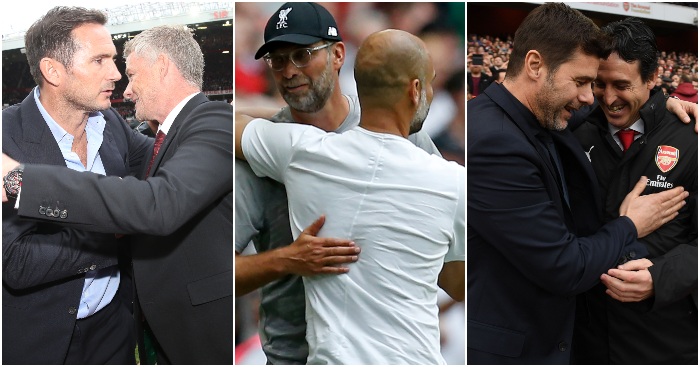 There are holes in every squad, admittedly some far larger than others. We’ve included injured players but those out on loan don’t count…

With the signing of Rodri this summer, Pep Guardiola’s front six options would be enough to keep him permanently aroused. But the gaping void at centre-back must seriously harsh his buzz…

Currently, Guardiola has only one fit senior centre-back – Nicolas Otamendi. Aymeric Laporte’s injury could not have been foreseen but Vincent Kompany’s departure certainly could, which makes City’s refusal to buy a centre-back all the more bizarre, especially when John Stones – currently missing from the England squad with a thigh injury – could not be trusted when the Treble winners hit the home straight last term.

Should Stones’ stay on the sidelines, enforced or otherwise, extend beyond the international break then Guardiola will most likely use Fernandinho at centre-back rather than turn to Eric Garcia or Taylor Harwood-Bellis – 18 and 17 respectively. Kyle Walker could also move inside and allow Joao Cancelo a run at right-back, but Guardiola would not have been expecting to have to make do quite so soon, even if City’s need during the transfer window was glaringly obvious to all.

Jurgen Klopp took the ‘if it ain’t broke, don’t fix it’ approach to Liverpool’s summer despite losing a couple of out-of-contract squad members. Rhian Brewster slips comfortably into Daniel Sturridge’s shoes and James Milner can do literally anything so the hole at left-back behind Andrew Robertson isn’t the gaping void it might otherwise seem.

But still Klopp may regret not buying from a position of strength should injuries cause problems as Liverpool fight on multiple fronts. Alex Oxlade-Chamberlain’s return is a welcome boost but the Reds’ midfield still lacks a lock-picker for those few occasions when their preferred approach of battering down the door doesn’t work.

Poor Frank Lampard, not being able to sign any players, having to make do with the dozens already at Chelsea…

Of course, Lampard would love to have signed a centre-forward this summer but Tammy Abraham is making a decent fist of the chance he craved and Olivier Giroud is a bloody handy player to have in reserve. At the back, Lampard opted to get rid of David Luiz but Kurt Zouma’s return boosts the numbers at centre-half, even if the Frenchman has endured a rocky restart to his Chelsea career.

All in all, perhaps with the exception of peak N’Golo Kante, there aren’t many of Lampard’s first-choice outfield options who could not be satisfactorily replaced by their stand-ins, which is perhaps more of an indictment of Chelsea’s first XI rather than an endorsement of their strength in depth. But Lampard can do nothing about that this season other than improve the players at his disposal.

As City and Liverpool refused to add more depth to the areas in which they looked bare, Mauricio Pochettino chose not to recruit a back-up centre-forward for Harry Kane. Lucas Moura and Son Heung-min can both play through the middle but it remains a puzzler as to why Pochettino didn’t appear to even think of replacing Fernando Llorente on the Spurs bench.

The signings he made stiffened up Tottenham’s midfield and with Christian Eriksen staying, perhaps contrary to expectation, Pochettino is spoilt for choice across the middle. The same cannot be said at the back, however, with Spurs looking short at right-back, especially since the Juan Foyth experiment (new album out now) had to be shelved before it began.

The result of Unai Emery spending more than any other manager in the Premier League this summer is a scary-looking first XI. The David Luiz-led defence still frightens many Arsenal fans, despite it looking more solid than last season, but the front five could give any opposition defence the heebee-jeebees. All Emery has to do is get everyone on the same pitch at the same time.

Arsenal’s second XI is the first in reverse: the picture looks far rosier from the back than it might up front. Emery needs to hope his forward line stays fit because we’ve no idea what to expect from any of their possible replacements.

The first half of that starting XI offers Ole Gunnar Solskjaer a solid foundation if (a stonking-great ‘if’, admittedly) they all play to their potential. But it all goes downhill from there if United harbour genuine ambitions of breaking back into the top four. For players so inexperienced, Scott McTominay and Daniel James are pulling their weight but Solskjaer is still no wiser whether he can trust his front three to offer any kind of consistency.

Luckily for Marcus Rashford and Anthony Martial, there is no other real competition for the centre-forward role. Solskjaer likes Mason Greenwood but the youngster seems to have been earmarked for a wider role rather during the infancy of his senior career. So the United boss remains short in midfield and attack, despite having a second XI which cost the club in excess of £200million. Paul Scholes was probably right.