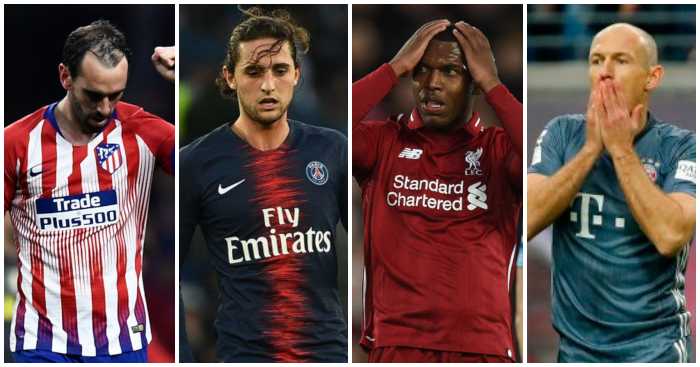 Granted, a goalkeeper and defence comprised entirely of 30-somethings would need plenty of protection from a midfield made up of players aged 29 to 31. But if anyone is capable of organising such a side, it is the similarly expiring (contract-wise) Rafael Benitez.

And just look at that attack; it has absolutely everything. With those trophy-laden bench options, they’d give anyone a decent game.

Talk about building a side around a strong spine. Sergio Alvarez is a Celta Vigo veteran goalkeeper, Diego Godin has been one of the world’s leading centre-halves over the last decade, Santi Cazorla is a beautiful man and Aritz Aduriz will be winning headers well into his 80s. With Victor Ruiz, Filipe Luis, Markel Susaeta and Ander Iturraspe members of a fine supporting cast, they might not even have to call on Thomas Vermaelen, Mathieu Flamini and Franco di Santo from the bench until the final few minutes.

Serie A – Managed by Claudio Ranieri

With a combined 2,934 Serie A career appearances between them – as well as 391 games managed in Italy’s top division by Claudio Ranieri – and an average age of just over 33, this is clearly a side blessed with experience and nous. The youngest player is Andrea Bertolacci, who turned 28 in January. The oldest player is Rodrigo Palacio, who started his professional career in 2002 and had an off-centre rat-tail as recently as last May. Act your age, pal.

Serie A has competition for the weakest available side. Rafinha, Arjen Robben and Franck Ribery are marquee names, but they have combined for just 51 of a possible 99 Bundesliga appearances this season, betraying their respective waning influences. Renato Sanches has played about as often for Bayern Munich as Rafinha or Robben.

The rest of the side is made up largely of fringe journeymen from Hannover, Hertha, Gladbach and Augsburg, with former South Korea captain Koo Ja-cheol, two-time Bundesliga champion Christian Gentner and World Cup goalscorer Josip Drmic adding a little lustre. Tottenham and Inter Milan are both reportedly interested in Bundesliga’s March Player of the Month Max Kruse, whose three-year Werden Bremen stay is coming to an end.

Rest of the world – Managed by whoever fancies it

Football Manager legend after Football Manager legend, from the unbeatable Guillermo Ochoa (Standard Liege) to midfield dynamo Alan Dzagoev (CSKA Moscow). With Porto pair Hector Herrera and Yacine Brahimi in tow, and the unstoppable Dieumerci Mbokani in reserve, we have a late challenger to this completely non-existent and utterly meaningless crown.