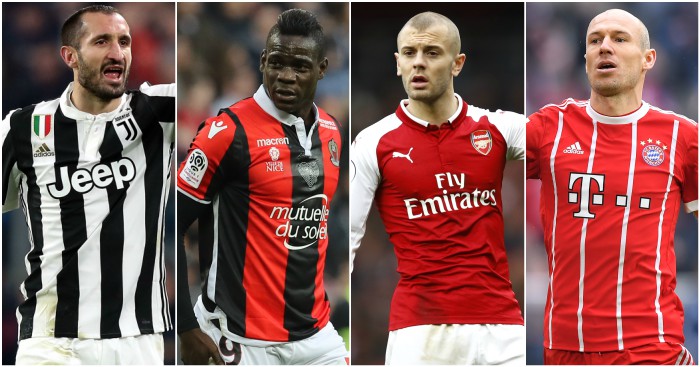 Michel Vorm remains capable of being a No.1 at a team lower down the table than Spurs, though he could not afford any rustiness playing behind the slowest central defensive partnership in made-up football. The full-backs aren’t in position to offer much cover either.

The midfield three is undoubtedly where this XI’s strength lies. All three could have their pick of clubs, with PSG and Juventus in for Fellaini and Can respectively, while Wilshere’s stock is arguably at its highest in a long while.

Ibrahimovic’s support is very lopsided, with Sako getting the nod over Palace team-mate Chung-Yong Lee, despite him and Brunt both being left-sided. Still, their job is simple: loft it into the box and let Fellaini and Zlatan smash everything in their way.

Hakimi is the only representative from either Barcelona or Real Madrid. though the 19-year-old full-back is almost certain to renew after breaking through to make six La Liga appearances this term, even scoring against Sevilla.

Eibar midfielder Dani Garcia is definitely on his way this summer, with Newcastle and Southampton supposedly interested.

Just the 107 years between a front three that would have been brilliant 5-10 years ago. Pizarro has scored a Bundesliga goal every year since 1999 and is still yet to decide whether to retire aged 39, while Robben (he reads his emails) and Ribery are due to hold talks with Bayern next month over the possibility of extending their stays.

Nigel de Jong, surprisingly still only 33, anchors the midfield, while Holger Badstuber is attracting interest from Lazio after an encouraging season fitness-wise, having made 21 appearances for Stuttgart.

Eintracht Frankfurt stopper Lukas Hradecky has been heavily linked with Borussia Dortmund, while Max Meyer looks certain to take a huge step forward, with Liverpool, Arsenal and Atletico Madrid all said to be interested in the Schalke midfielder.

Stereotypically, the Serie A defence looks as strong as any, with 230 international caps between the back four. Chiellini is said to be close to agreeing an extension at Juventus, but De Vrij is up for grabs having told Lazio that he won’t re-sign. Reina is being heavily linked with AC Milan having kept Napoli’s goal since peeling himself off the Bayern Munich bench three years ago.

In contrast, there are very few attacking options. Genoa pair Rossi and Pandev combine, though the former Man Utd centre-forward has played only 33 minutes for Genoa, while Pandev will be 35 at the start of next season, if he decides to swerve retirement for the time being.

Badelj is attracting considerable interest but the midfielder has recently taken over the Fiorentina captaincy following the death of his close friend Davide Astori. Chelsea have been linked with Juventus left-sider Asamoah.

Amiens keeper Regis Gurtner gets the gloves over Nice bench-warmer Yoan Cardinale, while former Arsenal right-back Mathieu Debuchy is likely to be in demand after rebuilding his reputation during a short-term deal at St-Etienne, where he was named Ligue 1 player of the month in February.

Monaco’s Joao Moutinho is free to take his 105 Portugal caps wherever he wishes this summer, and the 31-year-old anchors alongside Nantes’ Adrien Thomasson.

Mario Balotelli and Hatem Ben Arfa, out of contract at Nice and PSG respectively, could form either the most thrilling or frustrating forward line. The penny appears to have dropped for 22-goal Balotelli, but Ben Arfa’s head remains up his arse having not played this season.