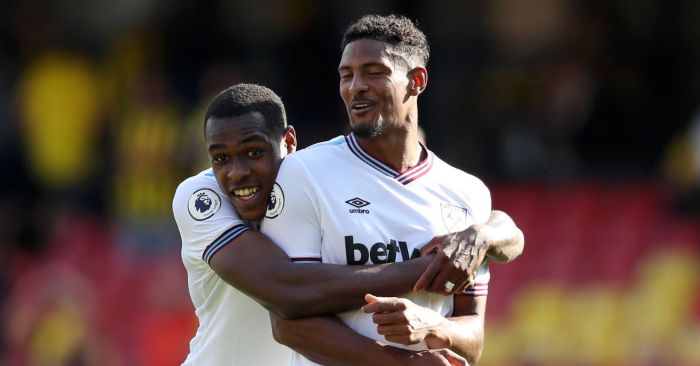 Do not, whatever you do, fall asleep during Match Of The Day. If you do, you risk waking up in the middle of Britain’s Youngest Football Boss, a curious West Ham vanity project documenting Jack Sullivan’s new life as CEO of the club’s women’s team.

In the show’s ten-episode (10!) run on the BBC, it was never made entirely clear what Jack did as CEO or what his responsibilities were, but the cameras did follow him around loyally enough to prove that, in retrospect, they should have been aimed elsewhere.

Detailing the launch of a new women’s football team is an interesting premise. In this case that was an opportunity lost, as the many unseen challenges and compelling characters involved in such a process were collectively relegated to being a sub-plot.

Had BYFB been about the players and the sacrifices made in aid of their careers, that would probably have made for some good television. It might also have been of tremendous benefit to West Ham Ladies, for whom such exposure would presumably have been beneficial. Alas, we mainly just get Jack: walking through the occasional office, going for periodic runs through dystopian Stratford, and sitting nervously next to his dad at matches.

There’s nothing wrong with Jack. Really, he’s guilty of just being young and a bit bland. Nevertheless, the show provided an unwelcome callback to the days when the entire West Ham identity was defined by these odd little moments – or when, in the metaphorical sense, the cameras should have been pointing elsewhere.

Their game at Watford on Saturday was one of the matches of the season so far. It was full of mistakes from both sides and littered with little flaws, but as a contest it gave its money’s worth. It was great fun.

West Ham arrived off the back of that terrible hiding at home to Manchester City and a slightly more encouraging draw with Brighton. They also came to Vicarage Road at the end of a summer which has seen them spend heavily again and, as seemingly always, promising to be all manner of things.

They’re a unique club in the Premier League. They, more than any other, are a side who could perform in any way at all and still surprise nobody. They can be really good, really bad or really average during any month of any given season and, regardless of context, that would be entirely expected. That’s the personality created by the Gold-Sullivan era: that West Ham are the product of mild chaos, the footballing equivalent of throwing paint at the wall every twelve months and hoping that a Jackson Pollock appears.

Or that was the case. In June of 2018, a month after Manuel Pellegrini had been appointed, Mario Husillos arrived as director of football. It was the point at which order began at London Stadium, replacing the if-it-feels-right-do-it culture which had existed before. Results didn’t immediately reflect the growing maturity – West Ham’s start to last season was famously awful – but by May everyone at the club had reason to feel positive about the direction they were headed in.

As they do now. There were a few conclusions to draw from Saturday. One is that the defence has some problems, particularly in the gaps between the centre-halves and full-backs. The second is that the midfield remains a work in progress, because despite finishing well-beaten, Watford had a grip of that game for a long time. But the third is that their transfer business looks excellent and, for a second year in succession, West Ham appear to have identified their needs and reacted to them.

Why is Jack Sullivan relevant to any of this? Well he’s not, but that old sense of profile and visibility is. His documentary series offered a timely reminder of how tilted the lens used to be at West Ham and how, for no reason at all, the club’s owners would insert themselves into the news cycle when, for the betterment of the team and morale of the supporters, the boardroom needed to be locked away from that.

It contradicted what has become a truism in modern football: a good owner is not a visible one. There are exceptions, of course – huge, Stan Kroenke-shaped exceptions – but, generally, fans do not want their club’s image defined by Twitter spats and ego-driven media appearances. The worst trait of all, though, is conflating wealth with footballing acumen; being rich enough to own a club does not always make someone suitable to its day-to-day running.

For a long time, West Ham’s limitations were the consequence of that mistake. Now, their gains on the field are the product of recognising and correcting it. The more the owners, their children, and the managing director have receded from view, the more credible the side has become.

Saturday was defined by Sebastien Haller and his first two goals for the club. His performance shouldn’t be exaggerated, because by his admittance he didn’t play to his absolute potential, but he was still the difference between the two sides. Moreover, it doesn’t take much foresight to see how, in the future, his abilities could mesh with his new teammates. With Felipe Anderson and Manuel Lanzini. With Pablo Fornals, once he acclimatises to English football. Perhaps with Andriy Yarmolenko, if his legs aren’t as dead as they look.

The point, really, is that it’s possible now to look down on this West Ham team and think that it has a proper future. To believe that somewhere within the Rush Green training ground – on a whiteboard, a laptop, or even a series of index cards – exists an actual plan for where this group of players will be in six months, a year, 18 months. Maybe there’s even a place for long-term transfer strategising? A room where grey-faced analysts are bloodlessly plotting the club’s moves in January and beyond, envisaging the squad’s progress in proper cycles.

It’s easy to imagine Haller becoming a force in the Premier League and, more importantly, to envisage those supporting players developing a rich chemistry with him. He’s lithe and imposing. His game is half finesse, half power, meaning that he’s equipped to deal with even the most agriculture centre-halves, but to also exploit the spacial opportunities resulting from their displacement.

That should be a prerequisite for any new centre-forward, particularly one who cost £40m. But at West Ham, it’s one of the few times a big investment seems to be the culmination of prior work and a rare occasion on which team-building philosophy has remained consistent across different windows. That’s a reductive assessment, most likely, because the activity prior to Husillos and Pellegrini wasn’t always just instructed by hunches and gut feelings, but – importantly – it always felt like it was. The end product suggested that to be true.

Why? Because West Ham overpaid. They overlooked character deficits, ignored red flags, and saw players as isolated batches of attributes rather than as component parts. Essentially, they exhibited the symptoms of skin-deep recruitment and, as a result, more often than not got the minimum return on their annual investment. Maybe it does their decision-makers a terrible disservice, but, from the outside, it always looked like a case of rich men having too little respect for the professions and primacies needed in successful squad construction.

It must be an easy mistake to make. If any of us had the ability to buy a football club, the temptation to impose what we think we know about the game would be overwhelming. Most of us would probably want the publicity and, given what we’d parted with, we’d almost certainly want to be seen as the big men or women making the big decisions. To hear the crowd chanting our name, to be celebrated for something more than just accumulating wealth. It’s not a particularly relatable situation, but it’s easy to see how it can be so seductive.

But West Ham’s tomorrows seem more encouraging because they’re successfully untangling themselves from that problem. The owners and their offspring will never be to everyone’s taste, but they have been smart enough to seal themselves off from their club’s footballing mechanics, allowing a proper strategy to grow. It’s both telling and instructive, for instance, that this side doesn’t look like something which was thrown together over the summer, but appears instead – at this admittedly early stage – like a continuation of a process which began last season.

Such deeper logic would be little to cheer about another club. It would be a pre-requisite. At West Ham, though, where it has so often been absent, it’s both long overdue and probably most welcome.