Home Manchester United News Who are Europe’s best U21 performers? 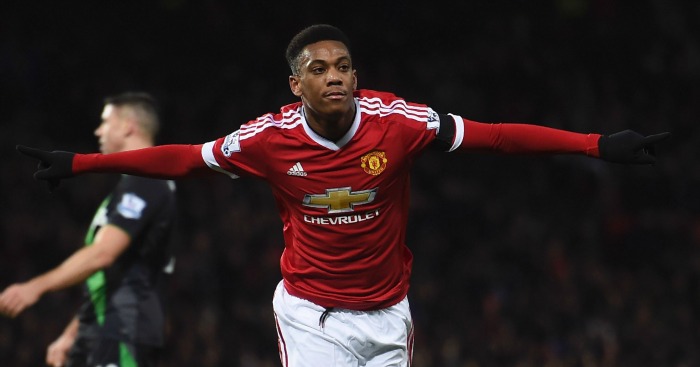 Dele Alli needed just two minutes to score his seventh league goal of the season for Tottenham on Tuesday, while Anthony Martial completed a rare sweeping Manchester United counter attack with a sublime finish for his sixth. Both players unsurprisingly rank among the best players aged under 21 this season, but who else makes WhoScored.com‘s top six across Europe’s top five leagues?

6) Anthony Martial (Manchester United) – 7.29 rating
Having become the most expensive teenager in footballing history in the summer there was plenty of pressure on Martial to succeed at Old Trafford. Having hit the ground running, the Frenchman looked unaffected by the weight of expectation as he coolly went about his business to score four goals in his first four appearances for the club.

An understandable slump in form would follow, but the forward has looked back to his best this year, picking up WhoScored.com man of the match ratings in each of his last two appearances. With nine goals and six assists across all competitions, he has proven to be United’s strongest summer signing by a distance. Only three players have completed more dribbles in this season’s Premier League (55) than Martial.

5. Thomas Lemar (Monaco) – 7.29 rating
With Monaco needing to replace the attacking input of Martial, Leonardo Jardim will have been delighted with summer signing Thomas Lemar’s start to life in the French principality. Impressing having broken into the first team at Caen last season, the versatile youngster has played across the line of three behind the striker for his new club. He’s impressed wherever he has been deployed.

In 14 Ligue 1 appearances this season, three of which have come from the substitute’s bench, Lemar has scored four goals and registered two assists to earn an identical rating to the departed Martial. Tending to play in a more central role than the United man, the 20-year old averages 1.7 dribbles and 1.6 shots per game, along with a commendable 1.6 tackles.

4. Marc Stendera (Eintracht Frankfurt) – 7.32 rating
At just 20 years of age Frankfurt midfielder Stendera has already amassed over 50 league appearances in Germany’s top-flight and is sure to be on the radar of clubs across the continent. His box-to-box style will appeal to many suitors, coupling an impressive defensive output with strong figures going forwards.

Only one player is averaging more tackles per game in the Bundesliga this season (3.4), while Stendera has also completed 2.0 dribbles per game and mustered 1.8 shots. A return of two goals and an assist is modest, but if he can add to those tallies then there’s no reason why the youngster can’t play at the very top level. Bayern, Dortmund and Bayer Leverkusen will be keeping tabs. 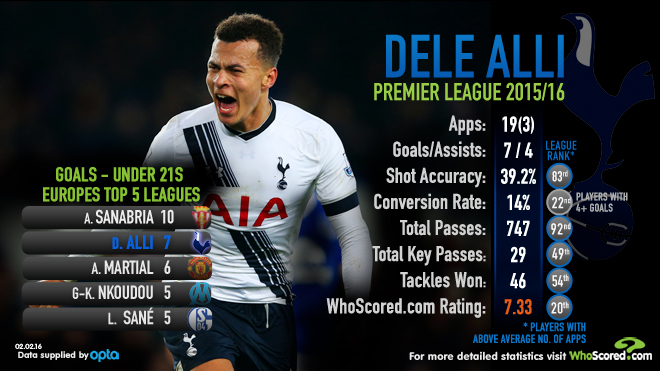 3. Dele Alli (Tottenham) – 7.33 rating
With seven goals to his name in 22 league appearances this season, Dele Alli has already become an integral part of Tottenham’s first team. His goal tally is bettered only by Georginio Wijnaldum of Premier League central midfielders, with a further four assists proving just how effective the teenager has been in the final third.

Alli has made light work of the step up from League One to the top flight, and looks a certainty for Roy Hodgson’s England squad at the Euros. He, like Stendera, has all the attributes to become a complete midfielder, averaging 2.1 tackles and 2.1 interceptions per game, along with 2.3 shots.

2. Ousmane Dembele (Rennes) – 7.43 rating
Just as we’ve gotten to grips with multiple Dembeles, another one crops up. At just 18, Ousmane is one to watch. He has made an instant impact in Ligue 1, scoring four goals in just seven starts across five different starting positions. His pace and trickery is best suited to a place on the wings.

Already awarded three WhoScored.com man of the match awards from 11 appearances this season, the first came in his very first league start for the club, with a goalscoring display against Bordeaux. Meanwhile, only three players are averaging more successful dribbles per game in France’s top tier (3.5). Dembele will prove very difficult for Rennes to keep under wraps. Just please don’t move to Tottenham.

1. Kingsley Coman (Bayern Munich) – 7.56 rating
It’s fair to say the two-year loan deal agreed between two of Europe’s biggest clubs for Bayern to secure the services of French forward Kingsley Coman from Juventus caught many off guard. It will be interesting to see what the future holds for the teenager now that Pep Guardiola’s summer switch to Manchester City has been confirmed. The 19-year old has featured 13 times in the league for the Bundesliga champions and looks set to become the long term successor to injury-plagued compatriot Franck Ribery. Would Pep want to pack him in his suitcase?

With three goals and two assists to his name in Germany’s top-flight, Coman has offered great balance to the exceptional Douglas Costa on the opposite flank when the duo have started. With 3.5 successful dribbles per game, only the aforementioned Brazilian and Borussia Monchengladbach’s Ibrahima Traore have averaged more in the Bundesliga.