Home F365 Features Who does Solskjaer keep, and who should Man Utd ditch? 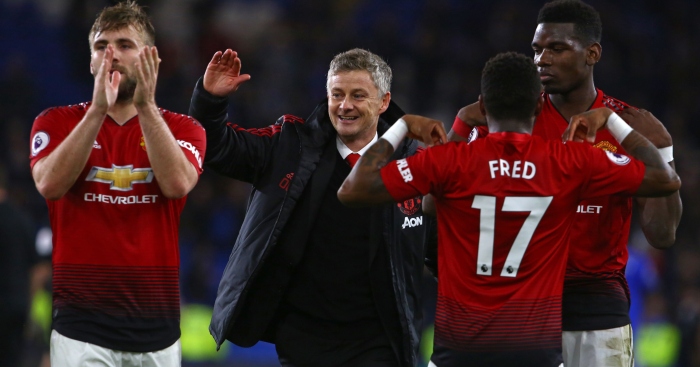 Three defeats in four and links with countless new players have led to suggestions that Ole Gunnar Solskjaer is ready to swing the axe in the direction of his squad. Which Manchester United players should go, and who should stay?

David De Gea – The Real Madrid rumours are circulating again and the Spain keeper holds the upper hand given he will be entering the final year of his contract. Pay the man, Ed – KEEP

Sergio Romero – One of the most reliable back-ups around, which you might expect of an Argentina No.1 – KEEP

Victor Lindelof – Regardless of whether Solskjaer signs another centre-back, the Swede will be a starter next season – KEEP

Eric Bailly – Brilliant fun to watch, which isn’t a great quality in a centre-back. Hasn’t progressed in three years – DITCH

Phil Jones – Pulls funny faces, doesn’t he? If you look beyond the gurning, when he’s fit, Jones is an asset. It’s the ‘keeping fit’ which is the problem – KEEP

Chris Smalling – His reputation has suffered because of Gareth Southgate’s strange assertion that he’s useless on the ball. But he can defend and remains one of United’s best two centre-backs – KEEP

Marcos Rojo – His United career is like his toast: done a while ago – DITCH

Diogo Dalot – The 20-year-old has played everywhere up the right flank as well as on the left. Next season, the right-back slot should be his – KEEP

Ashley Young – The former England international has signed for another year and the skipper will be useful to have around, but not as a regular starter – KEEP

Matteo Darmian – The Italy defender is useful to keep in case of emergencies but Darmian, understandably, believes there’s something better out there – DITCH

Paul Pogba – At the end of his third season, the record signing is still to show that he can be the leader United need, and while he continues to have his head turned by whichever of Barcelona, Real Madrid or Juventus are sniffing at any particular time, that consistency is unlikely to suddenly appear. With two years left on his contract, he is unlikely to become any less of a problem. If Zinedine Zidane really wants him and Real will pay… – DITCH

Ander Herrera – You can’t blame the Basque for considering his options as he approaches free agency and his 30th birthday, but if he’s expecting United to pay him £200,000 a week… – DITCH

Andreas Pereira – The Brazil international will be 24 upon the first day of 2020 but still we don’t know if he can cut it at United. The fact that is the case suggests perhaps not, but he’s got one more year to prove the pessimists wrong – KEEP

Nemanja Matic – The Serbia star is often one of the first scapegoats and the last to receive praise, but Matic has competition from within the club, as well as any potential recruits. Scott McTominay and James Garner can learn a lot from the 30-year-old – KEEP

Alexis Sanchez – Hasn’t this gone well? If they can find anyone to take the Chilean off their hands… – DITCH

Juan Mata – Lovely Juan can pick his club next season. United hope it will be them, but not at that price – KEEP

Romelu Lukaku – Solskjaer reportedly wants Jadon Sancho to form a fearsome front three with Marcus Rashford and Anthony Martial, which would leave the Belgian out in the cold, or at leats on the bench. The centre-forward won’t stomach that for long, so it is up to him to prove his worth – KEEP

Anthony Martial – Solskjaer’s arrival persuaded the Frenchman to sign a new contract, now he has to tease out of him some consistency. But the manager can’t do it alone. Martial could be brilliant but it’s up to him – KEEP

Jesse Lingard – The man with most to lose from Sancho’s possible arrival. Lingard, who will be 27 later this year, was one third of Solskjaer’s front three but from the right, his long-term regular place appears to be rather less secure – KEEP

Axel Tuanzebe – Injury has put paid to the defender’s hopes of impressing on loan at Villa this year after an encouraging start. Another loan is likely – KEEP

Joel Pereira – How are we to know if Jose was right and Pereira is “the best Portuguese goalkeeper of the next generation” if he doesn’t play? Another loan is inevitable – KEEP

Dean Henderson – The Sheffield United loanee has been a big hit at Bramall Lane. Leave him there if the Blades win promotion – KEEP