Home F365 Features Who doesn’t love a wonderful own goal? 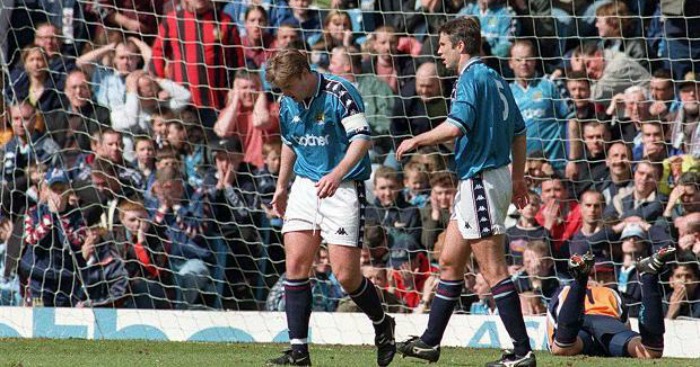 Most long-term Manchester City fans were not too worried about the error by John Stones on Sunday that gifted Southampton a goal and denied Pep Guardiola’s men the chance to go two points clear at the top of the Premier League. They remember all too clearly the days before the big-money Adu Dhabi investment when City were the cock-up kings of English football. So does Nick Szczepanik, whose new book Pulp Football looks at the farcical side of the game – the gaffes rather than the glory, the red cards and red mist, the punch-ups between teammates and rival mascots, the chairman spoken to by aliens. Needless to say, the section on own goals includes a contribution from City, and it was one that helped dump them into the equivalent of League One. Leading the Premier League only on goal difference doesn’t sound too bad by comparison, does it?

Some own goals are classics. Tony Popovic scored what would have been a goal of the season contender for Portsmouth against Crystal Palace at Fratton Park on Saturday 11 September 2004, if he had not been playing for Palace at the time. Steve Stone crossed from the right, about waist high. The ball had almost sped past Popovic before he could react, so in desperation to make some sort of contact he flung his right leg out behind him – and, with a backheeled flick, volleyed the ball in an unstoppable loop over the head of goalkeeper Julián Speroni and in.

But perhaps the ‘best’ own goal was scored by Jamie Pollock of Manchester City against – sorry, for – QPR at Maine Road on 25 April 1998. It was a goal worthy of a Paul Gascoigne or a Matthew Le Tissier if it had been scored at the right end.

Pollock, a solid defensive midfield player, had joined City in March to help with their battle to avoid a first-ever drop to the third tier of English football, but the club were still in mortal danger, in 22nd place, when they faced the Londoners, who were one position better off, in the penultimate game of the season.

As QPR right-back David Bardsley crossed the ball towards the dangerous Kevin Gallen after 21 minutes with the score 1-1, Pollock, chasing back diligently, anticipated the danger and hooked it away from Gallen and over the forward’s head. So far, so good. But then, as the ball dropped, he attempted to cushion a header back to Martyn Margetson, his goalkeeper. Sadly, he put a little more pace on it than he had intended and nodded it over him and into the net.

To make matters much worse, although Lee Bradbury levelled soon after half-time, City could not find a third goal, even after QPR’s Nigel Quashie had been sent off, and the game ended 2-2. That meant that QPR were safe, while City had to hope that results went their way in the final matches of the season eight days later. Pollock and company did their part, winning 5-2 away to Stoke, but unlikely away wins for Portsmouth and Port Vale sent City down. Without Pollock’s own goal, it would have been QPR who went down and City who stayed up. According to the Loft For Words website, “Pollock was subsequently named the most influential human being of the millennium, beating Jesus Christ and Karl Marx into second and third places, in an American university poll hijacked by QPR supporters.”

Pollock’s nightmare was unusual in that most own goals are the result of a single touch of the ball – a misdirected header, a sliced attempt at a clearance. Nobody dribbles the ball past their own goalkeeper. But Chris Brass of Bury managed two touches when he scored for Darlington on 22 April 2006. As a hopeful ball was lobbed forward from midfield after only eight minutes of the match, defender Brass, eight yards out, attempted to hook the ball away over his shoulder. Unfortunately his aim was off and the ball hit him full in the face and rebounded past the flat-footed goalkeeper, Kasper Schmeichel, who was enjoying an early taste of league football on loan from Manchester City. It was the only goal Brass scored in 28 matches in a Bury shirt and a painful one, but there was no lasting damage as Bury went on to win 3-2.

“I think the thankful thing is we actually got the result,” Brass later told Sky Sports News. “I can laugh about it but I had an untold weekend of ribbing about it, including ‘Kammy’ [Sky Sports pundit Chris Kamara], who started it on Sunday morning.

“When it happened, I truly didn’t know whether to laugh or cry. Some of our players have said they were laughing. I can’t explain it, I really can’t. I couldn’t have hit it any sweeter and the unfortunate issue is it broke my nose again to boot!” In 2008, Brass became Bury’s caretaker manager for half a dozen games. Presumably he did not demonstrate his unique skill in training.

Own goals are usually accidental, but Mick Harford later admitted that his headed own goal in a vital match between Luton Town and Derby County on the final day of the 1990/91 season was deliberate. To stay up, Luton needed to beat Derby, who were already down. Harford, a Luton legend who had played for the Hatters for five seasons, had joined Derby halfway through the previous season, but did not forget his old Luton loyalties. Four minutes before half-time, he met a free kick with a glancing near-post header past Peter Shilton and Town were on their way to a 2-0 win and safety. Down instead went Sunderland, whom Harford was to join in March 1993.

In September 2010, former Liverpool legend Jamie Carragher intentionally blasted the ball past a Liverpool goalkeeper in his own testimonial match against Everton at Anfield – from the penalty spot.

Like a number of other Reds favourites including Ian Rush, Robbie Fowler, Steve McManaman and Michael Owen, Carragher had been a Toffees fan as a boy, and it had been his lifelong ambition to score a goal for them, and on that day his chance arrived. Everton were awarded a penalty at the Anfield Road End and as Yakubu Aiyegbeni stepped up to take it, Carragher rushed past him and slid the ball past Liverpool keeper Brad Jones.

“As an Everton fan as a kid I’ve always dreamed about scoring against Liverpool so that is why I did that,” he explained.

Carragher, in fact, once described himself as “The biggest Blue in Bootle” and applauded fans who wrote ‘Thank You Arsenal’ on the wall of a local pub when the Gunners’ 2-0 win at Anfield denied the Reds the title in 1989.

“I was a total Everton fanatic right through my childhood and teens,” he said in 2008. “Everton controlled my life and dominated my thoughts 24/7. I went to the away games, followed them across Europe and in the mid-80s went to Wembley so often it began to feel like Alton Towers. When I talk about that Everton team I still say ‘we’. Even when I was playing for Liverpool reserves I’d want Everton’s first team to win the derby every time.”

That explains the penalty own goal, but not all the others he scored – more than he managed at the correct end, including two in Manchester United’s 3-2 win at Anfield in the Premier League in 1999/2000 and one in the 3-3 draw with West Ham United in the 2006 FA Cup Final.

Three players, though, went one better by scoring for both sides in an FA Cup final: Bert Turner of Charlton Athletic against Derby County in 1946, Manchester City’s Tommy Hutchison against Tottenham Hotspur in 1981 and Spurs’ Gary Mabbutt against Coventry City in 1987. All three finished up with runners-up medals.

Teams are sometimes the victims of a collective own-goal madness. Sheffield Wednesday were obviously in a generous festive mood when they gifted West Bromwich Albion a hat-trick of own goals through Vince Kenny, Norman Curtis and Eddie Gannon in a 5-4 home defeat on Boxing Day 1952. On Christmas Day two years later, Danny Murphy, Kenny Boyle and George Underwood of Rochdale all helped Carlisle to a 7-2 home win.

The Premier League is held up by some as the pinnacle of footballing excellence, which makes it hard to explain how Sunderland scored three own goals in just seven minutes in their home defeat by Charlton Athletic on 1 February 2003. Jody Craddock had already deflected a Mark Fish shot before Steven Wright got the final touch to put the Addicks ahead, a rebound off goalkeeper Thomas Sorensen went in off Michael Proctor, and Proctor scored a second when he turned his back on an incoming corner and turned the ball past Sorensen again.

Portsmouth decided on Saturday 6 February 2010 that anything Sunderland could do they could equal, so Anthony Vanden Borre, Richard Hughes and Marc Wilson each scored own goals in their 5-0 defeat by Manchester United at Old Trafford.

This is an extract from Pulp Football by Nick Szczepanik. You can buy it, and download a free sample chapter, right here.