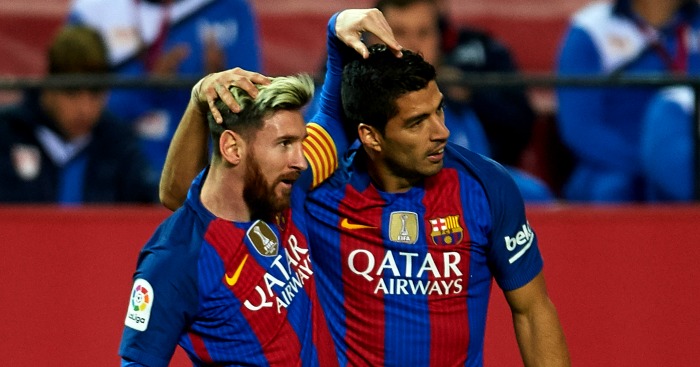 We are in Ballon d’Or season so we are looking at the players to score the most league goals (across Europe’s top ten leagues) in this calendar year.

In 2015 the man at the top of the chart was Cristiano Ronaldo (with Alex Teixeira second and Lionel Messi third). Ronaldo was also the main man in 2014 (ahead of Messi) and in 2013 (ahead of Luis Suarez and Messi), while in 2012 it was Messi who topped the list with Ronaldo in second.

In fact, the last time neither Ronaldo nor Messi topped the chart was 2009, and the man at the top of that chart was Suarez. Could he do it again?

10) Vincent Janssen (AZ Alkmaar and Tottenham) – 22
Yes it was only Eredivisie, but 21 league goals in 17 games since the turn of the year in Holland was nothing short of phenomenal. Just one goal (a penalty) has followed for Tottenham but he still has 22 goals in 2016 at a rate of a goal every 90 minutes. In case you were wondering, Harry Kane has scored 17 Premier League goals in 2016 with a strike every 129 minutes. And yet even half-fit, he was considered a better option for Spurs against Arsenal.

9) Fedor Smolov (Krasnodar) – 22
While Janssen has taken 28 games to score 22 goals in 2016, the 26-year-old Smolov has needed only 19. Phwoar. He has scored eight in eight this Russian season before getting injured. The most astonishing thing about this ridiculous 2016? He was signed by Krasnodar for nothing in 2015 after three goals in 68 games for Dynamo Moscow. You won’t remember him from Euro 2016 because some fool played him on the wing.

8) Islam Slimani (Sporting CP and Leicester) – 23
He started 2016 with eight goals in five games and he has barely looked back since, with a £30m switch to Leicester bringing three goals in just five Premier League starts. He left Portugal with a final strike against Porto marking his 48th in 82 Liga games. Oh and he has 23 goals in 45 games for Algeria. Basically, he is a machine. He’s the reason Jamie Vardy can’t sleep at night. Or is that the Red Bull and Skittle vodka?

7) Sergio Aguero (Manchester City) – 25
Just the 17 goals in the second half of last season (including a hat-trick against Chelsea) and now eight in ten under Pep Guardiola. The Spaniard believes he can make Aguero more than merely a goalscorer, but a strike every 92 minutes of Premier League football sounds pretty good to us. He is of course English football’s finest pure striker and we love him.

6) Alexandre Lacazette (Lyon) – 25
Above Aguero by virtue of a very, very slightly better strike rate, it still seems astonishing that his 15 Ligue Un goals since the turn of the year did not bring a) a summer transfer or b) a call-up by France. To Lacazette’s credit, he has just kept on keeping on, and has already scored ten goals in just eight league games this season. But will anybody pay the reported £60m transfer fee for a 25-year-old with one international goal?

5) Cristiano Ronaldo (Real Madrid) – 26
This is poor from Ronaldo, who has only scored a La Liga goal every 90 minutes this year. We’re embarrassed for him. He did win the Champions League and Euro 2016 but ending three years at the top of the calendar scoring charts will really smart. His five goals in eight league games this season have come against lowly opposition and even Iago Aspas sits above him in the 2016/17 scoring charts. How did he get that new contract?

4) Gonzalo Higuain (Napoli and Juventus) – 27
Should a 28-year-old striker have cost £78m? After 36 Serie A goals last season (with 20 goals in the 2016 run-in), Juventus clearly thought the Argentine was worth the outlay to truly challenge for the Champions League. His seven goals in 12 Serie A games this season is a decent record, but the Old Lady will expect rather more bang for their buck. Think Paul Pogba is under pressure? Check the Italian media’s reaction to a four-game goal drought.

3) Lionel Messi (Barcelona) – 28
The running total is higher but Messi has actually played four more games than Ronaldo and only Slimani on this list has a higher minutes-per-goal rate than Messi. As usual with the Argentine, it’s his consistency that is astonishing – he has only had ‘endured’ one three-game league spell with no goals in the whole of 2016. He has missed two La Liga games this season through injury and is still joint-top scorer in La Liga with a goal every 83 minutes. Not bad.

2) Zlatan Ibrahimovic (PSG and Manchester United) – 29
He left PSG with a ridiculous burst of 15 goals in eight games. Easier league, oui, but bloody hell. By his own admission, he has found life harder in the Premier League, but he has still scored six goals in his first 11 league games in England. The kicker, of course, is that he has had 43 shots while Alexis Sanchez has reached the same total with just 23. Still, 29 calendar goals in the year you turn 35? Not bad.

1) Luis Suarez (Barcelona) – 33
Basically there’s no way that Ronaldo won’t win all the prizes in a year in which he has won both Champions League and European Championship, but Suarez is undoubtedly European football’s form striker. Fourteen goals in five games as Barcelona wrapped up La Liga in May has been followed by eight goals in 11 games at the start of this season as they attempt to keep pace with Real Madrid once again. He is a phenomenon. “To be honest, I would give it to Suarez,” said Mario Balotelli this week. So would we, fella.