Home Liverpool Who is England’s most capped non-defensive non-goalscorer? 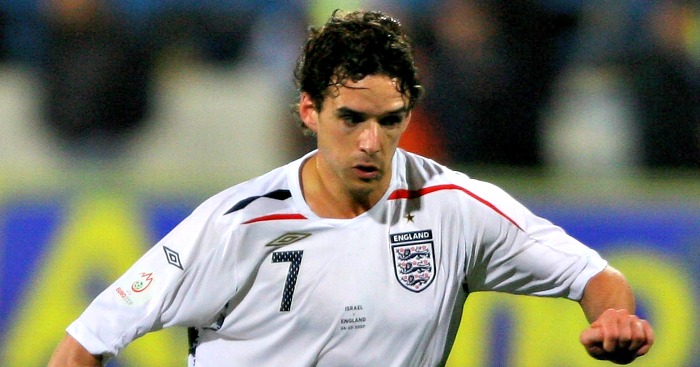 In terms of outfielders, Ashley Cole (107) leads the way for the most England caps without scoring a single goal.

Excluding goalkeepers and defenders, seven players have 30 England caps but no goals.

Kieron Dyer (33 caps) just missed the cut for this list because reasons, but whose dust is he eating in terms of non-defensive non-scorers?

Michael Carrick – 34 caps
The scorer of one goal in his last 83 Manchester United appearances, Michael Carrick was never a famed troubler of onion bags. It was perhaps that lack of a clinical edge that cost the midfielder what could have been a prosperous international career. His metronomic passing and unerring control were regularly cast aside in favour of Steven Gerrard and Frank Lampard: a partnership destined to fail, but featuring players who offered a potent goal threat from deep. He truly is one of the most notably under-capped players in England history.

Carrick’s England debut offered an insight into his future role. He was introduced as a half-time substitute alongside fellow debutants Alan Smith, Joe Cole and Danny Mills in a 4-0 win over Mexico in 2001; only 22 of his 34 caps were starts. But as bizarre as it seems, his international career was technically longer than Gerrard’s. Fourteen years and 172 days separate Carrick’s first and last caps, while that same gap for Gerrard is 14 years and 24 days. So there.

Stewart Downing – 35 caps
The one common link uniting almost every entry on this list shares is their position. As holding midfielders, goals were and are simply never in their remit, or at least fell low enough on their priorities to be overlooked. But the same cannot be said for Stewart Downing, the odd, goalless one out.

The 34-year-old did come awfully close in what he describes as his “best game for England”. Then the answer to the country’s eternal left-wing problem as Middlesbrough’s emerging star, Downing donned the No. 10 shirt and inspired England to a 2-1 victory over Germany in 2008. It was his corner that led to Matthew Upson’s opener, his free-kick that assisted John Terry’s winner, and his first-half effort that cannoned back off the post, with Rene Adler sprawling.

That was a distant memory by the time his last cap came in 2014. If England are back to being sh*t again just two months after reaching a World Cup semi-final, what were they when Downing was starting behind the striker five months after their Brazil debacle?

Nicky Butt – 39 caps
Pele might have considered Nicky Butt a “tremendous midfielder” who had been “the best player” at the 2002 World Cup ahead of England’s quarter-final meeting with Brazil, but his assessment that the Manchester United midfielder “gets forward” was never more than transparent praise. Butt was a fine defensive midfielder and water-carrier, particularly impressive in South Korea and Japan when England needed him, but his talents were never in the goalscoring department.

Things might have been slightly different, were it not for Sir Alex Ferguson. Butt recalled in 2014, a full decade on from his final England appearance, that the Scot would react to many of his international call-ups with a simple message: “You’ve got an England game coming up. You’re not going.” Lovely.

Owen Hargreaves – 42 caps
From one former Manchester United midfielder who ensured he was no longer the Butt of England jokes, to another whose reputation was almost transformed completely on the back of one exceptional major international tournament. Owen Hargreaves went into the 2006 World Cup with ‘the public persona of a mass murderer‘, and emerged with enough widespread support to carry his creaking body to another two more years of service.

It is a dreadful shame that Hargreaves only managed one relatively full season of Premier League football. He joined United perhaps too late, already carrying the numerous scars of first-team excellence with Bayern Munich at the age of 26. Of his 28 career appearances in England’s top flight, 23 came in the 2007/08 season when he played a pivotal role in a Premier and Champions League double. His two goals in that campaign are still remembered fondly by United fans – both coming from wonderful free-kicks – but he never truly had the chance to replicate that for England.

David Batty – 42 caps
‘I haven’t lost a single night’s sleep worrying about it since,’ David Batty once wrote of his crucial penalty miss in England’s defeat to Argentina at the 1998 World Cup. The Newcastle midfielder’s reaction was one of quiet, understated disappointment, but nothing a quick phone call to his parents, a few drinks and a round of golf couldn’t fix. The man at least partially responsible for the heartbreak of millions was not about to let one roll of the dice define him.

It might also offer an insight into why David Batty never troubled the scoresheet for England – and indeed did so just eight times in 438 games for Leeds, Blackburn and Newcastle. The midfielder was far more interested in the more gritty aspects of the game: the defensive side, starting counter-attacks instead of finishing them, and p*ssing off Roberto Mancini. The cries of “shoot” still linger around West Yorkshire for a man who so rarely did.

Jordan Henderson – 44 caps
Those in attendance at Stamford Bridge in September 2016, or at Anfield against Swansea in February 2014 and Manchester City in March 2015, will know what Jordan Henderson is capable of producing. His attacking instincts have been justifiably stymied for club and country, but the 28-year-old still has a respectable 21 goals in just over 200 appearances for Liverpool, and has never gone a season without scoring at least once. He also struck four times in 27 appearances for England’s Under 21s.

For the senior side? Nothing. Nought. Nada. Even Steven Caulker scored one goal…