Home F365 Features Who is in charge of transfers at each Premier League club? 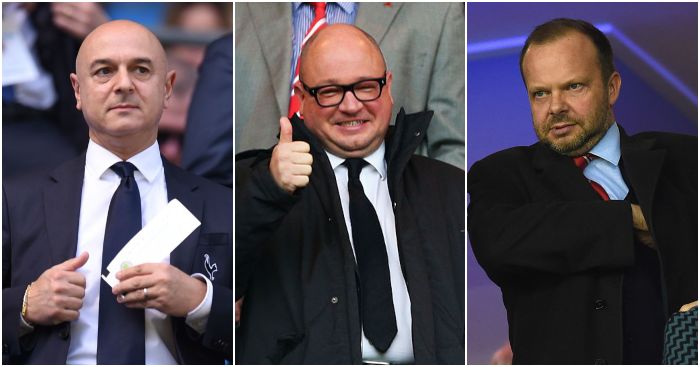 ARSENAL
The five-man band with no obvious frontman, of course. It’s a bit of a mess, with head coach Unai Emery, head of football Raul Sanllehi, interim head of recruitment Francis Cagigao, chief negotiator Huss Fahmy and the vacant technical director role – expected to be filled by Invincible Edu – all having their say. But who gets the deciding vote? Gunnersaurus?

ASTON VILLA
While the responsibility previously fell to director of football Steve Round, who would compile a shortlist of targets then present it to the manager to choose from, his departure last summer necessitated a change. Manager Dean Smith, sporting director Jesus Garcia Pitarch and chief executive Christian Purslow, appointed in October, October and August respectively, have since formed what the Birmingham Mail describes as a ‘triangle of power’.

When the trio come to a conclusion over a potential signing, chairman Nassef Sawiris and majority shareholder Wes Edens – billionaires, both – are asked ever so nicely to part with the requisite funds. It helped deliver Tyrone Mings and Kortney Hause in January, and £12m worth of purchases this summer already. So it seems to be working well enough.

It's becoming so clear now that #avfc are at long last being run properly from top to bottom. From Dean Smith and Suso to Purslow, Edens and Sawiris, it's finally looking professional again. Hasn't been that way for a very long time if we're honest. We got our Villa back.

BOURNEMOUTH
“The role is primarily heading up the recruitment department and having a structure in place which can put players in front of Eddie and his staff, allowing them to make decisions that are going to help in the recruitment of players,” said technical director, and former midfielder, Richard Hughes in May. His team includes old Cherries teammate Steve Fletcher, scouting and recruitment coordinator Craig McKee, senior recruitment consultant Andy Burton, UK senior first-team scout Steve Lovell and head of UK first-team player recruitment – and nephew of the manager – Andy Howe. Uncle Eddie has the final say on transfers, with chief executive Neill Blake doing absolute bits in negotiations.

BRIGHTON
Let’s just say there is an awful lot of pressure resting squarely on the shoulders of head of recruitment Paul Winstanley after last summer. He reports directly to chairman Tony Bloom and chief executive Paul Barber with regards to transfers; ask Chris Hughton just how little influence the manager has in that department. Technical director Dan Ashworth will also be involved, with the club relying on a more data and analytics-based approach.

BURNLEY
Burnley kindly and transparently described Mike Rigg‘s job specification thus upon his appointment as technical director in November 2018: ‘Rigg, who has held a variety of high-profile roles within domestic and international football, will head up the process of talent identification and recruitment throughout the whole club, from Academy to first team.’ The former head of player acquisition at Manchester City works with head of scouting Martin Hodge to identify targets that require approval from chairman Mike Garlick and manager Sean Dyche before being pursued.

CHELSEA
Does it matter? Fine. Whatever. Transfers tend to be guided by the advice of whichever poor sap is currently manager, but their part ends there. Club director Marina Granovskaia, according to Sky Sports, is ‘responsible for player transactions’ and ‘the scouting structure’. Her importance has only increased since technical director Michael Emenalo left in November 2017, as he is yet to be replaced. But she is second in this particular three-tier food chain. Chelsea’s system has, funnily enough, been implemented to ensure they are never reliant on the manager, with owner Roman Abramovich having the absolute final say on transfers.

CRYSTAL PALACE
“I felt this was a position the club needed,” said Frank de Boer in August 2017, welcoming the appointment of former Palace striker and manager Dougie Freedman as the club’s new sporting director. De Boer was gone within three weeks, with Roy Hodgson taking his place in the current set-up. But the manager is not quite as hands-on when it comes to transfers as chairman Steve Parish, with recruitment manager Omar Yabroudi part of the team working beneath the holy Selhurst Park trinity.

Fans wont be happy with Parish and Freedman if we get a repeat of last years transfer window. Can’t be waiting til the last minute to make our signings. #CPFC

EVERTON
“I would never bring in a player that the coach is not looking for or does not want to work with,” director of football Marcel Brands said in April. “The opposite will also not happen. If Marco likes a player but I don’t think he would fit in with the philosophy of the club or think he is not the right choice, too old or whatever it is. We both have to agree.” He and Marco Silva come to a unanimous decision, informed by chief scout Kevin Reeves and chief European scout Gretar Steinsson, then Brands works his negotiating magic.

LEICESTER
It took Leicester two months to replace Eduardo Macia as the lynchpin of their scouting department, with Lee Congerton ending an unpopular spell at Celtic by becoming the Foxes’ head of senior recruitment. He and Brendan Rodgers have worked together extensively before, and will do so again with director of football Jon Rudkin brokering any potential deals.

LIVERPOOL
That dastardly transfer committee, the one that betrayed Brendan Rodgers. They have laptops and stuff. Jurgen Klopp has somehow managed to harness the powers of air-con enthusiast and sporting director Michael Edwards, head of scouting and recruitment Dave Fallows and chief scout Barry Hunter to create a Premier League-tipped European champion.

MANCHESTER CITY
Ever since former head of recruitment David Harrison was tempted over to the dark Manchester United side in January 2017, it has fallen on three men to decide which of the scouting team’s numerous targets should have all the money thrown at them: manager Pep Guardiola, director of football Txiki Begiristain and chief executive Ferran Soriano. The Guardian described it as ‘a fluid, quasi-committee basis’ in July 2015, ‘the continental model of having expendable managers within an over-arching football structure’. But the head coach does get the final say, now more than ever.

MANCHESTER UNITED
There’s executive vice-chairman Ed Woodward, who is generally tasked with negotiations but also has the board-sanctioned power to veto any transfers. There’s manager Ole Gunnar Solskjaer and his assistant Mike Phelan, who have the same level of influence over targets. There’s chief scout Jim Lawlor, head of global scouting Marcel Bout, head performance recruitment analyst and technical chief scout Mick Court. But there is no Rio Ferdinand – yet – despite him being sexually aroused by the prospect.

NEWCASTLE
After Chatty Dad and former chief scout Graham Carr stopped feasting on his past successes, he was replaced by the club’s Under-21s scout Steve Nickson in August 2017. Appointed the new head of recruitment, his official remit is to help ‘evaluate all aspects of United’s player recruitment function, including the processes and systems used for scouting players at all levels throughout the club to ensure Newcastle United is best positioned to achieve its targets in this and future seasons.’ So yeah. He works alongside manager Rafael Benitez (for now) and managing director Lee Charnley, all before Mike Ashley comes along to sh*t on everything by refusing to hand over an extra £10 for the taxi to bring their prospective new signing to the training ground.

NORWICH
As head of recruitment, Kieran Scott oversees the entire scouting department for both Norwich’s first team and academy. His network will help find targets, while he, manager Daniel Farke and sporting director Stuart Webber have the biggest input in terms of a final decision. “My role eventually leads to speaking to Stuart and Daniel where we then go through the players and they then makes the decision on whether we are signing those players,” Scott said in December, with the fruits of their labour evident in a Championship title win. The Canaries signed 16 players this past season, including free agent and Player of the Season Teemu Pukki.

SHEFFIELD UNITED
The Blades appointed Paul Mitchell – not that one – as head of recruitment/development after restructuring their entire scouting department in the summer of 2016. Chris Wilder, who replaced Nigel Adkins around the same time, and assistant Alan Knill are particularly involved when it comes to transfers, culminating in their rise to the Premier League. No player is targeted without the manager’s approval. It then falls on chief executive Stephen Bettis to iron out all the details.

SOUTHAMPTON
The recent departures of technical director Martin Hunter and executive chairman Les Reed have forced something of a rethink at Southampton, where manager Ralph Hasenhuttl and director of football operations Ross Wilson have the most influence on transfers. Martyn Glover joined from Everton in April as head of scouting and recruitment, but their restructuring behind the scenes continues.

With the appointment of Martyn Glover, and others who will certainly join recruitment team, I sincerely hope we're touting these players already so we're ready to sell 1st June.

Most of them only get on our bench out of necessity. So many European gems we can look at. #saintsfc

TOTTENHAM
No-one is signed without Mauricio Pochettino first giving the green light. Indeed, no-one is signed at all when everyone is scared sh*tless of executive chairman Daniel Levy‘s negotiating skills. Their opinions are informed by chief scout Steve Hitchen, who turned down the chance to become Marseille’s director of football this month.

WATFORD
Three men tend to call the shots when it comes to transfers at Watford, another club that employs a system ensuring the manager is more of a cog in the overall machine than anything greater. So Javi Gracia has a say, but managing director and owner Gino Pozzo, CEO Scott Duxbury and technical director Filippo Giraldi make the decisions. According to the London Evening Standard, there is ‘a scouting board’ that operates in conjunction with that trio, comprised of ‘eight or nine’ individuals. They update Pozzo, Duxbury and Giraldi ‘every three months or so’, and they, with consultation from the manager, choose which players to target.

WEST HAM
No longer is West Ham’s transfer business instructed by David Sullivan’s kids. When Mario Husillos was brought in as director of football on June 13 last year, the co-owner himself stated in no uncertain terms that the Argentine “will take complete, strategic control of all player recruitment and, alongside Manuel, has the full support and confidence of myself and David Gold to lead that department”. His first transfer window alongside Manuel Pellegrini saw the club smash their transfer record for Felipe Anderson, while Lukasz Fabianski and Fabian Balbuena joined for relative pittances. Jose Mourinho was also driven to jealousy over Issa Diop – although Lucas Perez and Jack Wilshere are the rubbish roundabouts to those sexy swings.

WOLVES
A vast scouting network reports to sporting director Kevin Thelwell and manager Nuno, with managing director Laurie Dalrymple involved in the negotiation process. Then there’s Jorge Mendes, who chairman Jeff Shi referred to as “like a teacher” in May. That’s one way of putting it.