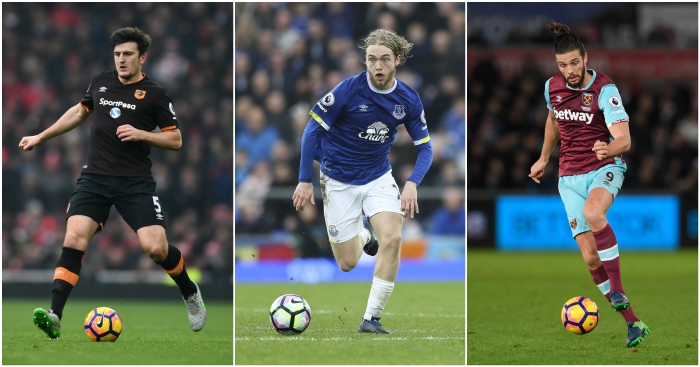 With the international break fast approaching and the England squad announced on Thursday, attentions turn to Gareth Southgate’s upcoming squad selection. Here, WhoScored.com select the most in-form England XI based on their statistical ratings of players to make more than five Premier League appearances in 2017…

Lee Grant – Stoke City (WhoScored.com rating 6.84)
It’s been a miserable season for Jack Butland, who is yet to feature in a competitive capacity for Stoke City this season. In his place, though, Lee Grant has impressed. The 34-year-old has started 23 of 28 Premier League games for the Potters this term, with his WhoScored.com rating in 2017 (6.84) is better than any other English goalkeeper to make more than five top-flight appearances this calendar year. A save success rate of 71.4% over that period is also a respectable return for Grant, though having not featured in any capacity on the international stage, he surely has no chance of a call-up from Southgate.

Calum Chambers – Middlesbrough (7.40)
Middlesbrough’s issues aren’t that they concede goals, but that they can’t score them. Aitor Karanka’s pragmatic approach means Boro have scored fewer goals (19) than any other Premier League side this season, but have conceded just 30. A solid defence is the ideal foundation from which to build upon, crucial to which has been Calum Chambers. The on-loan Arsenal man has been routinely deployed at centre-back this term, though in recent weeks he’s featured at right-back to good effect, earning a WhoScored.com rating of 7.43 in the position, with his overall rating in 2017 a highly respectable 7.40. He has three England caps to his name already and at 22 years of age still has a bright future ahead of him. That being said, he remains low in the pecking order for the Three Lions at both centre-back and right-back, though a number of solid showings between now and May will do his international chances the world of good.

Alfie Mawson – Swansea (7.24)
Having joined from Championship side Barnsley, Alfie Mawson took his time to consolidate a first team spot, despite arriving as a promising centre-back. Under Paul Clement, though, the 23-year-old is one of the first names on the teamsheet for Swansea City. A WhoScored.com rating of 7.24 is one of the best of all Premier League centre-backs in 2017, with his input at the other end of the pitch – four goals – benefiting the youngster. Defensively, Mawson impresses having committed just six fouls and been dribbled past on just six occasions in 10 league appearances in 2017. He’s one who certainly has a bright future ahead of him.

Harry Maguire – Hull (7.47)
Partnering Mawson at the back would be arguably Hull’s star man this season, Harry Maguire, with the former Sheffield United man impressing in his second Premier League season for the Tigers. Following injuries to Michael Dawson and Curtis Davies, Maguire has come in and thrived alongside Andrea Ranocchia under Marco Silva, with only Ben Mee (61) making more headed clearances in the Premier League in 2017 (57). With just one England U21 appearance to his name, however, it would be a shock to see the 24-year-old called into the squad this week, yet links with moves to Southampton, Everton and Tottenham suggests a first England cap could be on the horizon.

Leighton Baines – Everton (7.12)
Everton endured a problematic run of results earlier in the campaign, yet picked up their form at just the right time. Indeed, a 3-2 loss at Tottenham is their only defeat in their last 11 Premier League outings, with Leighton Baines rediscovering some form ahead of the upcoming international break. He’s behind only James Milner (14) and Nathaniel Clyne (12) for key passes (11) in 2017 of English defenders in the Premier League, while 39 tackles and interceptions this year is a commendable return. With Danny Rose out and Luke Shaw struggling for game time, this month could prove to be the perfect chance for Baines to make his return to the England fold.

Ross Barkley – Everton (7.74)
Ross Barkley is the second of three Everton entrants in this XI, with the Toffees attacker back to his best in the Premier League. Of his seven assists this season, five have come in 2017; only Gylfi Sigurdsson (6) has more to his name this year. He was one of four players who failed to register a single minute in England’s doomed Euro 2016 campaign and will be keen to make up the time with Gareth Southgate at the helm. He is second only to Christian Eriksen (30) for key passes (25) in the Premier League this year and in his current form, should perhaps be in Southgate’s XI, let alone his squad.

Tom Davies – Everton (7.08)
Rounding off the Everton triumvirate, Tom Davies has broken onto the scene in spectacular fashion. The teenager is now a first-team regular under Ronald Koeman and has been capped from England U16 through to U19 level. The next logical step would be the U21 squad, but his fine form for the Merseyside outfit may suggest he has done enough to earn a call-up to the senior squad. Everton score more (2) and concede fewer goals per game (0.5) when Davies starts in the Premier League this season than when he does not (1.6 and 1.3, respectively) and there seems no reason why he can’t transfer his good club form to the international stage.

Dele Alli – Tottenham (7.39)
One player guaranteed of a place in Gareth Southgate’s upcoming England is Tottenham star Dele Alli. He netted in Spurs’ 6-0 trouncing of Millwall on Sunday and has scored more league goals (7) than any other Premier League midfielder in 2017. He has, at times, struggled to transfer his good form for Spurs to England, but he remains one of the finest goalscoring midfielders in the country. His excellent performances this year have returned a WhoScored.com rating of 7.39 and there is no denying that – injury aside – he will be in Southgate’s squad for meetings with Germany and Lithuania. 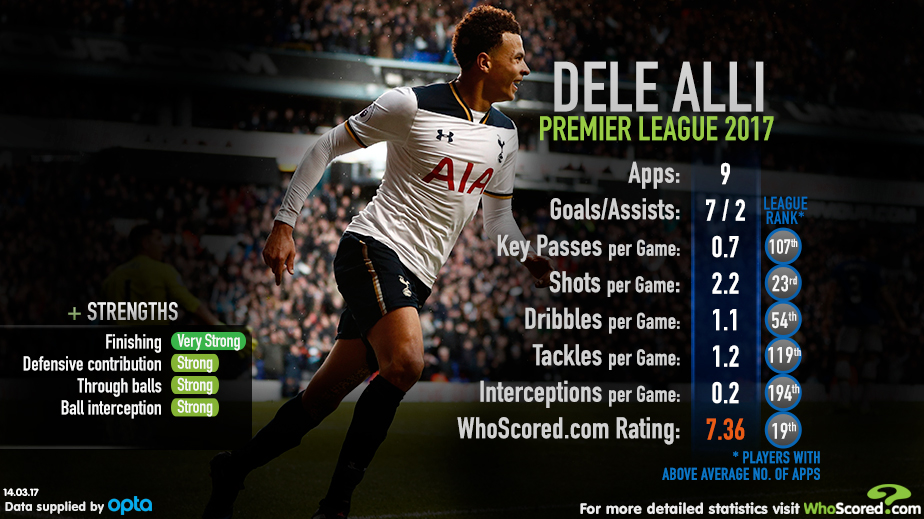 Nathan Redmond – Southampton (7.28)
Nathan Redmond has at times struggled for consistency following his big money switch to Southampton, but when on form, he is one of the trickiest widemen to stop. A brace in the entertaining 4-3 win over Watford last time out took his total this season to five and has seen him gain a WhoScored.com rating of 7.28 this year. As a regular in the England U21 squad, Southgate is well aware of Redmond’s attacking talents and with a lack of quality wingers in the Premier League, this week could be the opportune time for the 23-year-old to receive that first call-up.

Andy Carroll – West Ham (7.29)
Tottenham’s Harry Kane is the highest rated Englishman in 2017, gaining a WhoScored.com rating of 7.86, with 11 goals this year contributing to that, but he is set to be sidelined for the foreseeable future with an ankle injury. The next highest rated English striker in 2017 – Peter Crouch (7.51) – has retired from international football, with Andy Carroll the next best option for Southgate. Four of his six Premier League goals this season have been scored in 2017, while only Crouch (95) and Christian Benteke (88) have won more aerial duels than Carroll (61) in England’s top tier this calendar year. If Southgate needs a more direct option, then he could do a lot worse than call on Carroll and with Kane out and Wayne Rooney a serious doubt for the upcoming internationals, the West Ham striker could earn that long-awaited recall to the side.

Michail Antonio – West Ham (7.25)
12 months ago, Michail Antonio rejected the chance to represent Jamaica in favour of England on the international stage and was close to earning his first cap for the Three Lions when called up by Sam Allardyce last year. Since then, though, the 26-year-old has failed to make the cut on the international stage, yet continues to impress for the Hammers. A WhoScored.com rating of 7.25 is a notable average in 2017, while only Andrea Belotti (8) has scored more headed goals than Antonio (6) in Europe’s top five leagues this season. He offers another dimension to attack, while his versatility means he is comfortable on either the right or left flank or at wing-back, which would be a bonus for Southgate and England.