Home F365 Says Who knows what West Ham are, but they’re not what they were 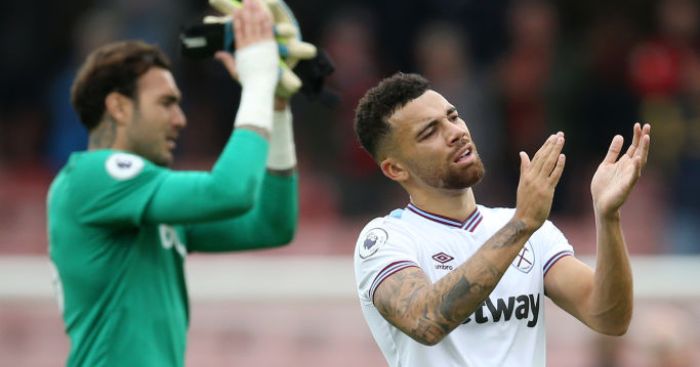 Around the Premier League, the sun is disappearing and the temperatures are beginning to drop. The greyer the skies and the gloomier the afternoons, the more that form begins to count.

And West Ham are in good form, but they’ve had a very strange week. That forceful win over a listless Manchester United was followed, shockingly, by a dreadful defeat at Oxford in the League Cup. True, domestic competitions are hard to care about at this time of year, but it’s best to bow out of them without making yourself a punchline.

The visit to Bournemouth, then, wasn’t just a chance to demonstrate European candidacy, but a chance for West Ham to show that they’re no laughing matter. Had they won at Dean Court, they might have finished the evening in second. As it is, they’ll have to settle for third after a 2-2 draw which spoke more to growing resilience than it did technical ability.

West Ham led early – and deservedly. Their strong start to the game was framed by a smart move between Felipe Anderson and Sebastien Haller, with Andriy Yarmolenko eventually rolling Nathan Ake, opening up his body and carving the ball inside the far post.

Then, an emotional lull which lasted the best part of an hour, aided – initially – by slack marking from a corner, a VAR intervention, and a fine finish from Josh King. West Ham had been here before. They lost comfortably at Dean Court last season, but two years previously saw another early lead became an injury-time defeat. In 2017-18, also, they surrendered a late goal in a 3-3 draw which felt like a loss.

On Saturday, though, the potency of their football reappeared from under that Bournemouth momentum. Shortly after half-time the hosts went ahead, this time courtesy of Callum Wilson, another VAR referral and an even tighter margin. It might have got worse, too. Lukasz Fabianski limped off before the break and Roberto, his replacement, stood up well to deny Wilson what would have been a decisive third. Stockley Park also found time to stick its oar in again, this time ruling an Ake goal out for offside.

So there were flaws here. Bournemouth were allowed to play extremely well for long periods and had they won the game, that would probably have been a fair result. But this is what separates those who have aspirations of finishing high up the table from those who actually do. Matches play out in cycles, subjecting sides to the good and bad. What matters isn’t the ability to level out those curves, but rather the tendency to respond positively to them.

And West Ham did that. Their performance can – and should – be criticised for all sorts of reasons, but its value was in its difference. In previous seasons, the loss of that lead, the departure of Fabianski, or those marginal VAR decisions may well have added up to a collective excuse, or at the very least a mass sulk.

It’s easy to imagine. Having beaten United just six days ago, the players – away from home, behind, and not on television – wouldn’t have chased the game in quite the same way. Because that’s what West Ham have been throughout the Premier League era. They’re the side who don’t hurt when they lose, who are capable of producing brilliant performances and beating the best teams, but who tax their supporters for those days with weeks of mediocrity after.

That’s the context. Here, at arguably the division’s least alluring venue, West Ham took a point from a game that history tells us they always, always lose. They had just enough quality, just enough self-respect and just enough belief in where they’re headed to ensure that Oxford now seems like the anomaly, and not Man United.

What are they? It’s too early to tell, but they’re not what they were.