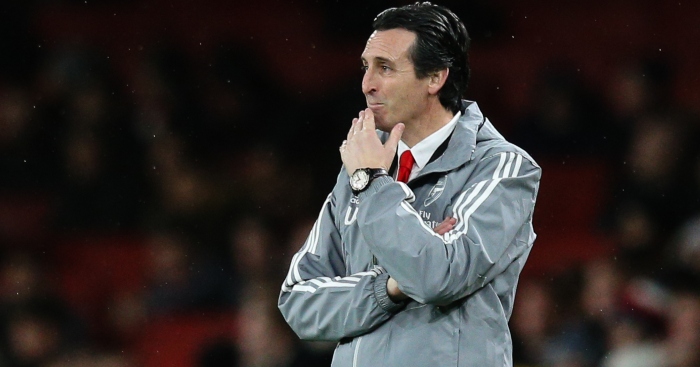 Unai Emery got his coat on Thursday night. Typically, it was the wrong one. The Arsenal boss can’t do anything right at the moment.

Appropriately, though, both Emery’s jackets reflected the mood on Thursday night. A funereal number in Frankfurt black had to be swapped for a garment as grey as the clouds that have refused to budge from above the Emirates since summer gave way to autumn. Indeed, the horizon looks even darker following a dismal 2-1 defeat to Eintracht.

Because Standard Liege failed to beat Vitoria in Portugal, the consequences of defeat for Arsenal’s Europa League prospects are not as severe as they might have been – they are certainly not as dire as Emery’s job prospects after this latest nadir.

It is hard to fathom how things could become more bleak than they are right now. But not impossible. Emery’s Arsenal, without a win in seven matches, are on the club’s worst run of form in 27 years with the latest episode of the long-running sh*tshow played out before a barely-there live audience at the Emirates.

Regardless of however Arsenal fudge the numbers, the attendance was every bit as alarming as the performance. Emery pleaded yesterday for more support and the board urged fans during the international break to quieten the ‘noise’ around the manager. In its place on Thursday night was an apathetic silence punctuated only by some crafty Eintracht Frankfurt fans and the boos of the few Gooners sadistic enough to stay until the end.

Upon taking their seats and perusing the team selection, those supporters may have interpreted Emery’s line-up as a two-fingered salute. It was presumed that Shkodran Mustafi would feature in a back-three shielded by Granit Xhaka but upon kick-off it emerged that Emery had found some more sh*t to throw at the wall.

Of course, it didn’t stick. David Luiz sustained an early injury which ended his midfield experiment and necessitated the introduction of Matteo Guendouzi. During the first half, it seemed not to matter, so poor were the visitors. Arsenal were not a great deal better but at least they threatened and forced Frankfurt’s back-up goalkeeper Frederick Ronnow into a number of saves.

Despite playing as a central striker, Pierre-Emerick Aubameyang seemed strangely bogged down out on the flanks and when he did position himself between the posts just before the break, Arsenal were in front.

But by then, an enthusiastic start had already given way to ponderous passing and sloppy turnovers and save for a post-half-time head of steam which dissipated within five minutes, the Gunners were on a familiar slide.

Dismal again. No point talking about the performance.

It’s now about how long Raul Sanllehi and KSE will allow this rot to continue.

They’re the ones to truly blame here.

If Eintracht Frankfurt’s game plan on a night they had to win was to lull Arsenal into their comfort zone with an unspeakably-bad first-half performance then it worked a treat. When the visitors, spurred on by Daichi Kamada’s well-taken double within five minutes either side of the break, moved through the gears, Emery and his side had no answers. In the 25 minutes after going behind, the Gunners managed not a single shot on target. They only one they mustered was a greater danger to the corner flag than Ronnow’s goal.

Alexandre Lacazette and Nicolas Pepe watched all this from the bench after Emery opted to use his substitutes elsewhere. Guendouzi’s introduction was forced upon him, as was Lucas Toreira’s after Mustafi failed to shake off a knock. With the one change Emery had full control of, he opted for Mesut Ozil, a player he exiled for much of the season before reinstating him under the assumption he could not do any worse than his other under-performers.

The players have to accept their share of the blame for Arsenal’s woes but Emery must take responsibility for the entire squad falling so far short of the standards expected at the Emirates. After a miserable night like this, it may feel like things can’t get any worse but seven winless games could become eight, nine or ten so low is the mood throughout the club.

The season is salvageable but not for as long as the board sits on its hands while Emery flounders in front of their eyes.