Home F365 Features Who’s next for Liverpool’s raid on the relegated clubs? 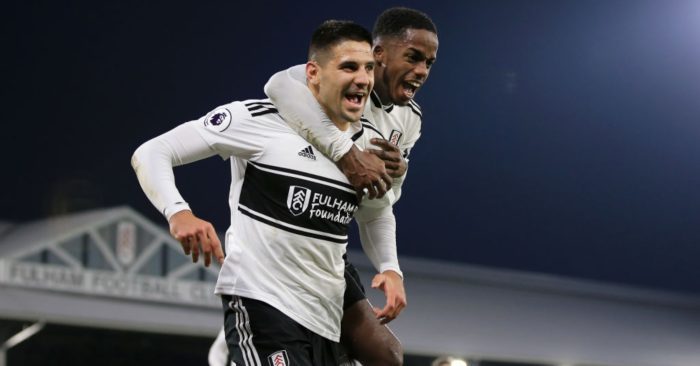 Danny Ings in 2015. Georginio Wijnaldum in 2016. Andy Robertson in 2017. Xherdan Shaqiri in 2018. Who will join Liverpool from the Premier League’s relegated clubs in 2019? We bring you five options…

Neil Etheridge (Cardiff City)
“It’s incredible how he is around the training ground, he has the best attitude I’ve ever seen in my life,” said James Milner last month of Simon Mignolet, who was reduced to the role of cheerleader by Alisson’s arrival at Liverpool last summer. But surely the Belgian will leave this time around for the chance to play actual football, and Liverpool will be in the market for a back-up goalkeeper.

One option could be Cardiff City’s Player of the Year Neil Etheridge, who has faced the most shots of any Premier League goalkeeper this season but still emerged with nine clean sheets. For the record, that’s more than David De Gea. And while the Manchester United goalkeeper has not saved any of the five penalties he has faced, Etheridge has saved three of seven. And that’s three reasons among many why some Liverpool fans are looking towards south Wales for their next No. 2.

If we part ways with Mignolet in the summer, I'd personally love to have Neil Etheridge as our #2. Very quality keeper and is the only reason why Cardiff have a possibility of staying up. Would feel very safe having him backup Alisson.

Phillip Billing (Huddersfield Town)
“I cannot name you one 22-year-old player who is comparable with him. He is 6′ 6″, left-footed, with an unbelievable shot; quick vision; technique; long throw-in; endurance and now, fighting spirit as well,” said David Wagner of the Danish Under-21 international who is one of the few players to have emerged from this disastrous season in credit for the Terriers. If Jurgen Klopp asks his old mucker who to buy from this season’s terrible triptych of relegated clubs, Wagner will point him in the direction of Billing.

Billing has already been schooled in the art of the press by Wagner and, at 22, is only likely to get better. While Christopher Schindler ended the season as Town’s Player of the Year (and would make an excellent signing for a mid-table Premier League side) it is Players’ Player of the Year Billing who has the brightest future.

And in Daniel Agger, Jan Molby, Torben Piechnik and Christian Poulsen, Liverpool already have a fine and proud tradition of signing great Danes.

Aleksandar Mitrovic (Fulham)
If you score 11 goals for a relegated side, then you absolutely should get a summer move. Now, logic may suggest that the summer move should be towards a mid-table club (and West Ham have been inevitably linked with the Serb) but the 24-year-old might be exactly the right player to offer another dimension at Liverpool after the exit of Daniel Sturridge. He is a natural goalscorer and has a fair wedge of fire in his belly.

Liverpool fans, would you take Mitrovic off Fulham as a backup striker?

I think he’s a bit of a beast that could be a decent wild card option.

Oh and Liverpool already owe him a massive favour; he was the man who recommended that Fulham take Lazar Markovic off their hands. It’s time to repay that sizeable debt.

Ryan Sessegnon (Fulham)
A disappointing season for Sessegnon but a) he is only 18 and b) he still managed to record more Premier League assists for Fulham (6) than any other player. He will move this summer and he is said to be a target for Liverpool, Manchester United and Tottenham, but understandably would prefer to stay in London and play for a manager with a track record of promoting and improving young players.

Ryan Sessegnon is someone we HAVE to go in for in the summer.

• Can play at left back & as a winger.
• Still only 18 years old.
• Supported Liverpool growing up.
• Idolises Steven Gerrard.
• Looks good in Red. pic.twitter.com/LmutlMEoM2

His worry may be that the left-back position at Liverpool might conceivably be taken for the next five years by Andy Robertson, while Sadio Mane will take some shifting further forward. If he wants to push himself into the England reckoning then Spurs – where he could realistically expect to replace Danny Rose within the next 18 months – might be the better option. But what sort of a lifetime Liverpool fan would turn down the chance to replace Alberto Moreno as their left-back understudy?

Jean-Michael Seri (Fulham)
It felt like quite the coup when Fulham signed a player who Xavi described as having ‘Barcelona DNA’, but it turns out that one man with Barcelona DNA is not enough if everybody else tests positive for Burton Albion. Seri will be on his way again this summer – and Monaco have been most strongly linked – after a season in which he has created the most chances for his teammates but claimed only two assists.

Liverpool were rumoured to be very, very interested last summer – along with every other member of the top six, Barcelona and Borussia Dortmund – so why not go back for the 27-year-old now that the price has dropped? They surely won’t be the only team tempted; after all, you can’t lose all your DNA overnight.

Jean Michel Seri and Aleksandr Mitrovic won't cost up 70 million pounds to purchase from Fulham. The same way Liverpool poached Shaqiri, I hope the United scouts can do something similar. Their love for scouting wrongly is becoming a disease. Both players can do a job or 2.