Home All The News Who’s next? Six candidates to replace Arsene Wenger 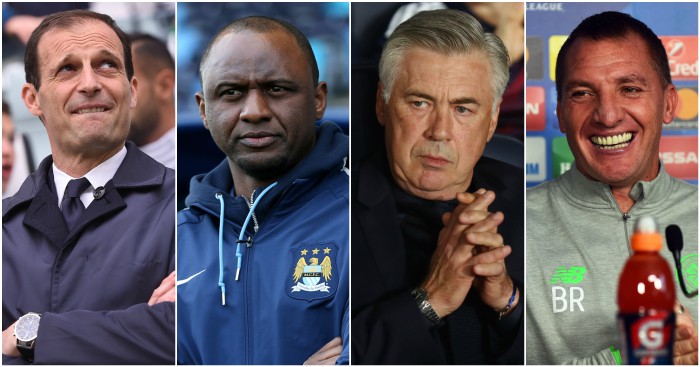 Arsenal are seeking a new manager for the first time in over 20 years after Arsene Wenger announced on Friday that he would step down at the end of the season.

Here are six of the favourites to replace the Frenchman at the Emirates.

The 44-year-old German is one of the most highly-rated coaches in Europe, regarded as a brilliant tactician, despite having won just one major trophy, the DFB-Pokal with Borussia Dortmund last season.

Tuchel, who made his name at Mainz, has been without a club since leaving Dortmund after two years last summer after falling out with club bosses. There are stumbling blocks, though, notably his reported feud with Sven Mislintat, the head of recruitment Arsenal appointed from Dortmund last November. Paris St Germain are also said to be closing in on Tuchel.

The unsung Italian has been in charge of Juventus since 2014 and has guided the Turin giants to three Serie A titles and two Champions League finals.

The 50-year-old has never managed outside his home country and there is no suggestion Juve are looking to make a change in the dug-out, but Allegri could be tempted by a new challenge in the Premier League.

The 58-year-old is a serial winner, having won league titles in four different countries and the Champions League with AC Milan and Real Madrid.

He is out of work, having left his post as Bayern Munich coach in September, and is familiar with the Premier League from his two-year spell at Chelsea from 2009-2011.

The suave 58-year-old has established Germany as a leading force in international football, guiding them to World Cup glory in Brazil in 2014 as well as at least the semi-finals of four other major tournaments.

He has been in the role for 12 years, so could be tempted by a change after this summer’s World Cup in Russia, although the Gunners might be put off by his lack of top club-level success.

The appointment of the former Arsenal midfielder would be a hugely popular one with fans. The 41-year-old was one of Wenger’s first signings in 1996 and went on to become regarded as one of the club’s greatest ever players, winning three league titles and three FA Cups in a nine-year spell.

He has been in charge of Major League Soccer side New York City FC since 2016.

The former Liverpool boss is closing in an unprecedented double Treble with Celtic, where he insists he has plenty still to achieve. The Northern Irishman has also spoken about the ‘Catch 22’ of being happy where he is, or testing himself back in the more volatile environment of the Premier League.

Would Arsenal fans be content with a Liverpool cast-off while other more glamourous names are in the frame, or did he achieve enough at Anfield to warrant some patience?