Home F365 Features Why are Sevilla top of the table in Spain? 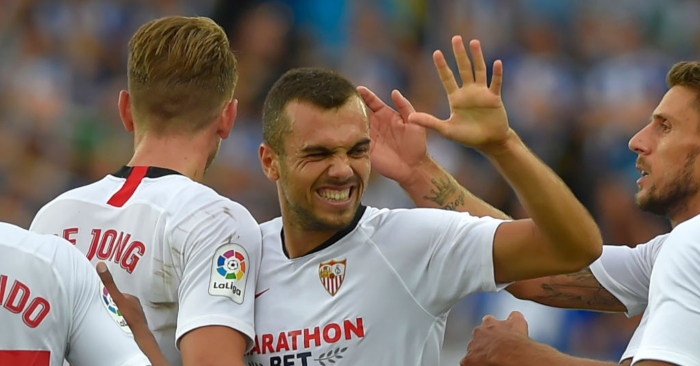 Four games into the season, and there’s only one team left in La Liga with a points tally in double figures.

With three wins and a draw so far, it’s Sevilla on top of the pile, ahead of their more esteemed rivals in Barcelona and Madrid.

It may be early days, but after a season that promised so much but delivered so little last year, there are plenty of reasons for Sevilla fans to be cautiously optimistic.

Firstly, and perhaps most significantly, the hugely respected director of football Monchi is now back at the club after a two-year sojourn at Roma. In his first spell at the club, he masterminded a period of unprecedented success, with five Europa Leagues and two Copas del Rey added to the trophy cabinet at the Sánchez Pizjuan.

He has a well-earned reputation as a transfer guru, with a knack of buying low and selling high (see Dani Alves and Ivan Rakitić, amongst many others), but has also overseen a hugely successful turnover of players from the academy. No wonder his homecoming was greeted with widespread jubilation by the Sevilla faithful.

Of almost equal importance to the new-found positivity in Seville is the appointment of an intelligent, tactically astute manager with a hunger to succeed. Enter Julen Lopetegui, last seen being bundled out the door by Real Madrid last October having been given the nigh-on impossible task of replacing a man who had won the Champions League in each of his seasons as a manager .

Lopetegui was handpicked by Monchi to be the man to lead Sevilla’s revival, and he seems to be an excellent fit. He is clearly eager to rebuild his reputation after his ill-fated spell at Madrid, and his success as head coach of Spain – where he managed to get a disparate group of players to perform with a clear identity – evidently appealed to Monchi.

His methods and style have already become apparent in the very early stages of his tenure at Sevilla, using his preferred 4-3-3 formation in each of his games so far.

The mobility of full-backs Jesús Navas and Sergio Reguilón is already looking crucial to Lopetegui’s system, while new signing Joan Jordán has excelled in the midfield pivot role alongside Éver Banega and Fernando. Having cost just €14m from Eibar, Jordán looks sure to be yet another Monchi masterstroke.

The defence has been pretty solid too, with only one goal conceded so far this season, while their opponents have been restricted to an average of just seven shots on goal per game.

The only area of weakness appears to be the forward line. Lopetegui’s side have only managed five goals so far, none of which has been scored by the main striker, Luuk de Jong.

Joan Jordán’s goals have directly earned Sevilla six of their ten points so far, in 1-0 wins over Granada and Alavés, but he cannot be relied upon to bail them out every week.

They need to find goals from somewhere else, and the deadline-day signing of Chicharito from West Ham was clearly pushed through with this in mind. The loss of Wissam Ben Yedder and Pablo Sarabia, who contributed a combined total of 30 league goals last season, is being felt, but whether Chicharito can plug the gap given his advancing years and waning ability remains to be seen.

If the target is to qualify for next season’s Champions League, then a new striker should be top of Monchi’s shopping list come January. There may not be many options available, but Mario Mandžukić, Mariano Díaz and Alfredo Morelos have all been linked, and each is capable of giving this Sevilla side what it’s lacking.

Despite the striker conundrum, it’s very much a case of so far, so good for Sevilla under the Monchi-Lopetegui axis. Any optimism among the fans has already been tempered with a note of caution – after all, they were top after eight games last season before a dreadful run of form caused them to slide out of Champions League contention.

The fans know that Rome wasn’t built in a day, and there will be far stiffer tests to come than those faced so far, starting with the visit of Real Madrid on Sunday night. But the makings of an excellent system are certainly in place at Sevilla, and there are many reasons to be cheerful. All that is needed is a little perseverance, and a lot more goals.