Home F365 Says Why are we ignoring the tactical genius of Jurgen Klopp?

He's not a children's television puppet; he's one of the great coaching minds of his generation. 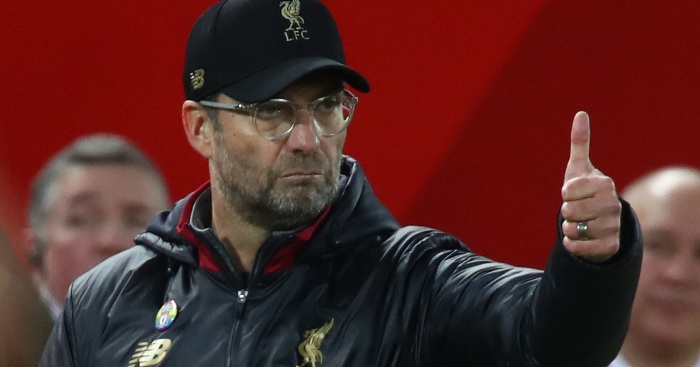 English football desired Jurgen Klopp long before he actually arrived and there was a specific moment when the infatuation began. Borussia Dortmund had just completed their astonishing comeback against Malaga in the 2013 Champions League and a breathless Klopp – glasses askew, clothes ruffled, lenses slightly fogged – was stuck in front of a Sky Sports camera.

He was quirky. His answers to the questions were off-beat and delivered in that – chortle, chortle, chortle – Germanic English which makes even benign remarks memorable. He was Christoph Waltz, with training cones.

And that’s when it started. That was likely the beginning of England’s relationship with the crazy, wacky, super-fun guy caricature which exists to this day.

It’s an understandable adoration. If Klopp didn’t exist then he’d have to be invented for the sake of the British media. And even then, it would be difficult to construct a head coach who so completely satisfied that appetite for personality. Klopp is successful, he’s interesting, but he also makes funny faces and his glasses sometimes fall off; what a gift he must be, given that there are still journalists dining out on Jose Mourinho’s ‘Special One’ press conference.

The public largely agree. What’s really interesting, 25 years after Jurgen Klinsmann first appeared in the Premier League, is that there’s obviously still a special place in British hearts for German people who don’t conform to English-drawn stereotypes. In Klinsmann’s case, the gentle self-deprecation within his goal celebration was enough to almost make an honorary national treasure. It was as if, by straying outside the boundaries of what a German person was expected to be, he was impossible not to like. The English are very strange.

Klopp is different, but the similarities are there. Not least in the sense that this is a personality-based affection and that shows in the coverage of his achievements at Liverpool.

Quite unlike his modern peers, his success is almost exclusively portrayed as an emotional manifestation. It’s as if Liverpool are powered by love, warmth and joviality alone and that Anfield is a place where a player is only ever a long hug away from the Ballon d’Or shortlist.

Football is not a dispassionate game and relationships matter a great deal, but – comparatively – very little attention is paid to the construction of this Liverpool side. Because they’re coached by Klopp, their mechanics are obscured by his associations. It’s telling, for instance, that despite deviating from their counter-pressing style some time ago, they’re still largely described in the same clichés.

These terms aren’t irrelevant, because what they describe can still be found somewhere in Liverpool’s play, but their over-rotation implies a lack of interest in the detail.

Which, actually, is out of step with the times. This is an intellectual age. It’s also an era of sycophant journalism and fandom. The standard is for over-celebration of tactical ideology, for gaudy coronation by snake oil, not the reduction of coaching philosophy to wifty rhetoric.

So it does seem as though Klopp is hard done by in that respect. Pep Guardiola has been the subject of several analytical biographies, each more toe-curling than the last. But his week-to-week performance, too, is always viewed through a reliably technical lens. The same is true with Jose Mourinho whenever he’s in employment and, more recently, Maurizio Sarri, who at Napoli had the informal patronage of Guardiola and – of course – the complete attention of every tactical mind in Europe.

The same is broadly true of anyone vaguely interesting in club football. As a rule, wherever there is something happening which isn’t 4-4-2 and diagonals into a channel, there is a small army of people carving it, scripture-like, on football’s cave walls.

With Klopp it’s different. There’s a strange prevalence of articles about him which begin with some twee anecdote and end, straight-faced, with a ‘and then he won the European Cup’ conclusion. It feels like over-inhalation, as if the author is drawing too heavily on the legend.

It’s a theme replicated by much of the television coverage, which seems always to be trained on the glasses, the funny faces, the goal celebrations. Boom! Again, that’s not a problem, but it’s a strange habit with a coach who has now created two of the most admired teams in European football within a single decade.

And it’s a shame, because there doesn’t seem to be a point at which it’s explained how he did that. The Firmino-Salah-Mane forward line, inarguably the most potent in the game, is described in Big Bang terms, as just a collision of particles which produced something magical.

A mechanism that is so precise that it makes a Swiss watch look like a child’s toy? It has to be more than that.

Or the full-backs, neither of whom are without talent, but whose progress – and whose well-oiled, exceptionally well-drilled work in tandem – is portrayed as an intangible construct, in which everything was made possible just be engendering young players with self-belief.

It’s all very nice, but in this cold, hard football world, it’s all a little saccharine and improbable. It also presents a version of Klopp which isn’t entirely truthful. He seems like a very warm, charismatic human being, that’s certainly fair, and he’s definitely proven himself capable of fostering special relationships with players, both now and in the past.

But as seductive as those frilly layers are, or as important as they may be to the overall process, they obscure the heart of this project. They present Klopp as something other than a hardened, ruthless winner. They pretend that he doesn’t regularly appear on the verge of physically eviscerating fourth officials, that he doesn’t drop clever misdirections across his press conferences and that his personality, while sourced from something real, has been adapted to purpose. He’s not a children’s television puppet, he’s a hard-eyed competitor and one of the great coaching minds of his generation.

To pretend otherwise is actually to do him a great disservice.