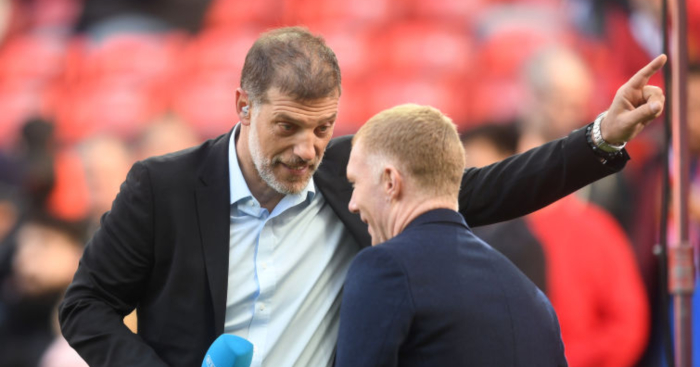 Earn your Spurs
Ladies and gentlemen: Tottenham have arrived (about 14 months after they first got here).

Credit to Neil Ashton though. He knows the score.

@f365 Guys, let me save you a job for the morning – Tottenham came of age tonight. 😙

The ref word
Considering just how ridiculous the Manchester City-Spurs game was, the newspaper match reports have actually aged pretty well by Thursday morning despite the countless rewrites and constant action.

Martin Samuel goes off on a tangent in the Daily Mail about how Heung-min Son’s improved scoring record without Harry Kane is ‘the most peculiar phenomenon,’ and that the South Korean might be ‘allergic to him,’ which seems to entirely overlook how his role and Tottenham’s style inevitably changes when Kane is unavailable.

His Mail colleague Ian Ladyman says Tottenham ‘deserve their place’ in the semi-finals but ‘at no stage did they ever gain control of the midfield area’. How surprising, considering Moussa Sissoko went off injured in the first half, Victor Wanyama was making his second start of 2019 and Harry Winks and Eric Dier were both injured, meaning Dele Alli had to drop back into an unfamiliar position.

‘For too long, Tottenham chased the game,’ he adds, seemingly having expected Mauricio Pochettino’s side to dominate possession against a full-strength Manchester City playing at home.

But by and large, the pieces are measured and balanced in difficult circumstances. Which makes it all the more weird that, with the benefit of more time to gather their thoughts and consider a binary question which should draw on their experience and expertise, some former referees still disagree as to whether Fernando Llorente’s decisive goal should have stood.

Now over to Mark Clattenburg of the Daily Mail: ‘Earlier, the use of VAR in checking and then allowing Fernando Llorente’s goal was a fantastic example of the system at its best – and the right decision was made.’

Glad you’ve cleared that up, fellas.

“We missed a penalty in the first leg but I am so proud of the players and the fans. I have never heard noise like that since I have been in Manchester but football is unpredictable.”

Mo problems
‘Yet the real cause for concern – and the reason why Liverpool’s title challenge is in danger of collapsing – is Mo Salah’s curious decision to impersonate Mesut Ozil’ – Charlie Wyett, The Sun, February 25.

‘While Salah has come to life over these last few weeks in spectacular fashion, it is Mane who has been Liverpool’s most consistent attacker this season’ – Charlie Wyett, The Sun, April 18.

You don’t mess with the Johan
In a week of Champions League miracles, The Sun shed a light on the greatest of all.

This is a belter from @TheSunFootball @TheSun @tonygallagher. Who knew that Johann Cruyff had come back to life? How did they get the quote from him after the match? An ouija board? pic.twitter.com/TeFzF90ifg

Ole Gunnar, be my girl? Yeah
It’s not all about Manchester City, Tottenham or Liverpool though. Another English team played in the Champions League this midweek, and Neil Custis bothered to notice for The Sun.

You’re a Newcastle fan, Neil. And you wrote the following on February 5:

‘OLE’S at the wheel and no longer needs his L Plates.

‘He has passed his test and needs to be given a full licence now to take Manchester United back to the future.’

‘This is an opportunity that cannot be missed, there is no need to wait, waver and go for someone more tried and tested at the top level.

‘In many ways it is the club’s final chance to cling on to what they had in the past. Someone who has a link to Sir Alex Ferguson’s glory days that cannot be garnered from videos, manuals, or experiences outside of United.

‘They are not just winning again. But doing it in a way that mirrors the philosophy and ethos of the great man.’

‘It is easy to quantify what a manager has achieved by pointing at facts and figures, yes even silverware – after all Mourinho won two.

‘It is more difficult to bottle up and exhibit a feeling at a club. A force, if you like. A sense that not only are results back on track but a club is too. The way staff are, the way people talk, the way people carry themselves.

‘It all of course filters down from what they see on a pitch.’

‘But United have been made into a team to be feared again.

‘It is five-and-a-half years since they had a manager who was able to do that – and they cannot let that go.’

All that in a piece which describes Solskjaer as a ‘mini Sir Alex’. Those Manchester United fans (and the club’s Sun correspondent) were played for fools.

Life Scholes
‘The most worrying thing about Tuesday night’s 3-0 defeat was the apparent disinterest on the pitch about what was going on,’ Custis adds. Yeah, either that or a 33-year-old Ashley Young man-marking Lionel Messi at left-back. That was pretty worrying.

‘Perhaps every player is thinking about themselves rather than the group. When massive money gets involved, that is what can happen.’

They were thoroughly beaten in a Champions League quarter-final they had no right to reach. When you play away at one of the best clubs in the world against one of the best players in history, that is what can happen. And it has more to do with shoddy investment and disjointed management than players ‘thinking about themselves’.

Were these players ‘thinking about themselves’ when they were winning 14 of 17 games from December to March? And are United really ‘all back to square one,’ considering the gap to fourth was 11 points when Solskjaer took over compared to just two points now?

But this is Manchester United, were anything and everything absolutely has to be viewed in the prism of an irrelevant past. Which leads to Custis bemoaning how ‘the problems of modern-day football have derailed him’.

‘Paul Scholes used to walk into contract negotiations without an agent and just asked where he needed to sign.’

He was also Zinedine Zidane, Pele and Ronnie Wallwork’s favourite ever player, and used to spend entire training sessions pointing out trees and hitting them from 427 yards away. Don’t believe everything you read (or write), Neil.

‘He just loved playing football and loved Manchester United…Scholes just signed on the dotted line and played football. Too few do that nowadays.’

What a man. What a player. He’d have done it for free, such was his love for the club. So quite why he signed a five-year deal on a pittance of a £50,000-a-week wage as one of United’s best-paid players at the time in 2001 is a mystery.

He ‘just asked where he needed to sign’ and ‘played football’. But what in the world of f***ery does the contract negotiations of a player who retired six years ago have to do with United losing to Barcelona in the Nou Camp?

Contract killer
‘MANCHESTER UNITED players are queuing up to sign new deals in the belief that Ole Gunnar Solskjaer will be made permanent manager’ – Neil Custis, The Sun, February 8.

‘All those up for new deals no longer seem to think about the club, the crest or the history but about how they should be rewarded in relation to an under-performing Chilean who rehabs from injury by riding a horse’ – Neil Custis, The Sun, April 18.

That line about Alexis Sanchez is spectacular, by the way.

Headline of the day
‘Paul Ince: United have gone backwards since Ole was named manager’

They have quite literally gone forwards in terms of both Premier League position and in the Champions League.

Of course, you’d have guided them to victory in the Nou Camp wouldn’t you, Paul?

Recommended reading of the day
Jack Pitt-Brooke on Manchester City.