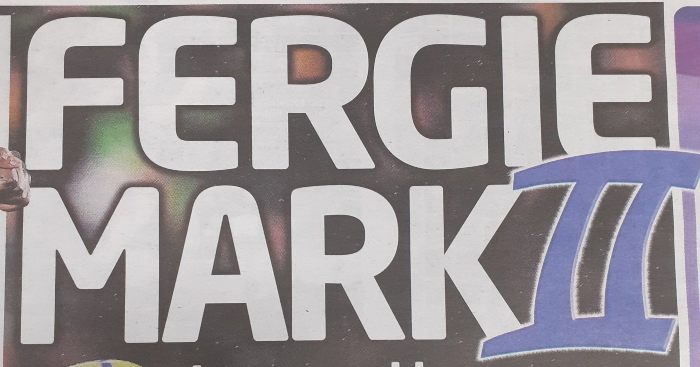 ‘The Glasgow accent is missing and there is not the same glint in the eyes.’

…there was a moment of dreadful realisation: Frank Lampard is about to be compared to Sir Alex Ferguson, isn’t he?

‘The Premier League might just have the new Alex Ferguson – unfortunately for Manchester United, he is at Chelsea.’

‘After just four months as Stamford Bridge boss, Lamps comes over as a softly-spoken Fergie, demanding more from his team after they battled through the wind and rain to beat a Watford side who would not lie down.’

Can there be such a thing as ‘a softly-spoken Fergie’? And is Lampard really the only Premier League manager to have ever possessed ‘an edge of steel’ since May 2013? And are we comparing a relative novice to one of the greatest managers in the entire history of the sport after winning 2-1 against a team that have not tasted victory in 15 league games?

‘Good managers always insist on their teams giving more. Great managers get it.’

FERGIE MARK II. And that’s a direct quote, by the way. See for yourselves.

Lampard has had one full season of coaching (in the Championship), taking Derby from 6th in 2017/18 all the way to 6th in 2018/19. He has started excellently at Chelsea but has been a Premier League manager for all of four months. His entire coaching career spans 74 games.

It would be generous right now to consider him as the second coming of Darren Ferguson, never mind his bloody father.

Mediawatch remembers some other fella being referred to as Sir Alex Ferguson 2.0 not too long ago. A few times. And then some more. And again.

Whatever happened to that guy?

Refine by me
FERGIE MARK II is unfortunately looking up at BRENDAN RODGERS MARK I in the Premier League table. How weird.

‘Boss Brendan Rodgers has refined their title-winning style, working on their 2016 technique to build an even better team.’

They play in an entirely different formation, with almost a completely different squad. Their average possession in 2015/16 was 44.7% per game; so far this season, that figure is 55.6%.

To ‘refine’ is ‘to improve or perfect by pruning or polishing’, or ‘to make improvement by introducing subtleties or distinctions’. Not to change entirely but still be pigeonholed by lazy, empty cliches.

When the same author later writes in the exact same piece that Leicester ‘have developed another way to play under Rodgers,’ you do wonder what’s going on.

The bird is the word
See if you can spot a theme from these extracts of the rest of Ashton’s piece for The Sun:

‘They have the Premier League in a flap.’

‘Leicester are taking off again.’

‘They are homing pigeons…’

‘Leicester have their wings, taken to dizzying new heights under their forward-thinking head coach.’

‘Keep this up and they can rule the roost.’

It’s because they played the Eagles! And are flying! Although that doesn’t explain this monstrosity:

‘WAGs will be WAGs and Leicester will be Leicester.’

‘Adam Lallana claims Liverpool have become so accustomed to winning late, they can smell the panic welling up in opponents.

‘Dean Smith’s plucky Aston Villa battled to within eight minutes – including stoppage time – of a famous victory on Saturday.

‘But, just like the child character in the creepy Bruce Willis movie, Lallana’s ‘Sixth Sense’ told him there was to be yet another twist in the tale.

‘He could see HEAD people!’

It’s because they scored two headers! And, erm…

Mesut up
‘Writes’ Tony Cascarino in The Times:

Or rewarding a player for an impressive performance in midweek?

‘If the Arsenal manager genuinely believed Ozil was the man to lift his faltering team, he would have used him more than twice in the Premier League this season.’

So he either has to play him all of the time or stick to his guns and use him none of the time? What about if Ozil has improved in training? Or his overall attitude has altered? Emery, for all his foibles, will have a better idea than most after watching him throughout the entire week.

‘Instead, his selection seemed motivated by a desire to appease the Arsenal fans.’

If Emery was motivated by any sort of desire to appease the Arsenal fans, he’d probably start with implementing actual tactics first before starting a player that some are still not enthused with.

Ask a simple question
‘Is it me or have United gone from a club that takes pride in having some of the best footballers in the world playing regularly for the club, to becoming an auditions’ agency for promising youngsters?’- Garth Crooks, BBC Sport.

Shelvey unit
‘This player will look back on his career and genuinely wonder why he never won more caps for England’ – Garth Crooks, BBC Sport.

And everyone else will look back on his career and genuinely think six England caps for Jonjo Shelvey was a little too much.

By hook or by Crooks
Mediawatch also enjoyed Garth’s suggestion that Eddie Howe can ‘occasionally rely on’ Joshua King, who has reached double figures for goals in one fewer Premier League season than Cristiano Ronaldo. And the claim that ‘Steve Cook was unlucky not to make my TOTW last week after his header against Watford hit the bar,’ with his actual defensive performance seemingly unimportant. And the declaration that ‘I don’t think I’ve seen anything like’ Ben Foster almost scoring, despite five keepers literally having done just that in Premier League history.

‘Accidental Ole Gunnar Solskjaer’ of the day
‘I was at the Nou Camp yesterday attending a conference on thefuture of tech, but couldn’t help thinking of Manchester United’s historic comeback in the Champions League final of 1999’ – Matthew Syed, The Times.

Recommended reading of the day
Nicky Bandini on Mario Balotelli.