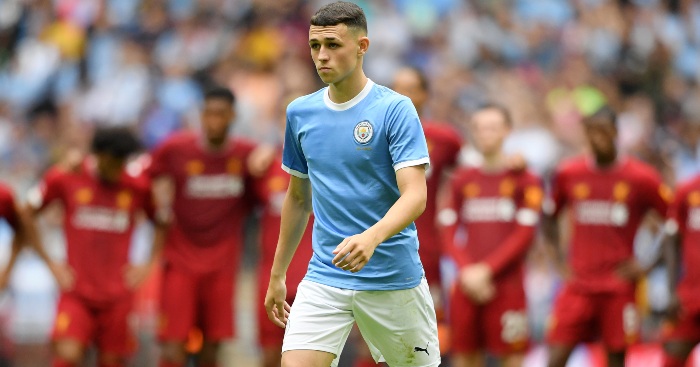 Send your football-themed emails to theeditor@football365.com. We’re too sad to read any more about politics…

So, Phil Foden can’t get a game at City under Pep… and would obviously walk into United’s 1st eleven. But is it that bad an idea?

Instead of competing with Silva and Silva, he’d be “competing” with Jesse Lingard, Daniel James and… well maybe Periera. So he’d get the games he needs.

He’d be so complementary to our squad. The only player like himself, in fact. There’s little doubt he’d put chance after chance on a plate for Martial and Rashford… who in turn would create space for him to drive into and bag goals.

He wouldn’t have to move house. He’d be confident his manager really does believe in investing in youth. And he’d be part of a team on the up instead of one that’s ending a cycle.

Sure, the transfer fee would be punchy – but in a major plus for City, it would allow Pep to add to his dysfunctional fullback collection.

Come on Phil, join the plucky underdog team who are actually more like the Citeh you supported as a kid! We promise not to erect a crass billboard in your honour…

To James T, Ishikawa, Japan; I’d imagine Minamino could fill in for any one of front 3 when they need a break. Especially Firmy.

I read the email from James T, Ishikawa, Japan today about Atalanta (I had no idea they overcame that start to qualify for the next round) and at the end of the email, what stood out to me was it was signed:

TX Bill (I swear, I did go to school although there’s scant evidence of that.) EFC

* That 15 minutes blitz though was outstanding though, Pereira and Mata combined for the first goal and once again showed why this team needs a consistent magician. Pereira pulled off a back heel
allowing Mata space to create the goal ,unfortunately this won’t happen often in the premiership as Mata is too old and slowand Pereira too inconsistent,

* It’s that inconsistency that demands this is a priority signing I read a bit of sniggering that it’s the managers job to improve those he has ,but if that was 100 per cent true Pep would not have needed his fullback upgrades or Ederson and Klopp would have stuck with Karius/Mignolet and not bought Van Dijk. There would likely not have been domestic treble and 198 points in two years for the Citizens or a sixth big ears and Jim White would be unemployed

* After that it was the Greenwood show , Thats six goals already in December in all competitions, What a player , he needs to gradually, Needs to get more minutes but those are 2 goals a six year veteran would be proud of.

* There were also stellar contributions from the other young guns that played it was interesting seeing Garners tackle for the second goal (may have been a foul),Williams and Greenwood created the penalty with their runs ,Laird gave hope that we have an alternative when we want to rest our 90’s full back overall not bad.

* That being said Utd is slowly becoming no country for old men, Matic was slow and predictable , Young besides the goal gave the ball a lot and Mata really is just showing us his last bit if of skill in this tournament ,Poor Phil Jones couldn’t get on till the score was 4 0 .expect all 4 men to be gone by 2020/21 latest

* Overall great result and top spot guaranteed , Should be among the contenders with Gunners,Ajax Inter etc. ,Won’ dictate whether the manager stays in the same way Astana game had no real bearing either .roll on Sundays game

So when Danny Rose’s comments are presented like Oliver presented them, it would appear that Danny is not speaking to his manager….

I guess context is everything, he’s actually talking about having a conversation about a new contract, not conversations as a whole.

The rest of the piece is pretty gushing…

“I never thought I would be managed by Jose Mourinho at Tottenham,

…and to get someone like Jose has been obviously brilliant.

He’s one of the most decorated managers of my lifetime so it’s been a good start for the team and I’ve enjoyed it so far.

I feel very lucky to work under him.”

Declaring that you will see out your contract is not (yet) reason for dismissal.

Last ones on politics

And Remainers still voted for his Labour instead of for people who stood for what Remainers claimed to believe in.

Everything that’s coming is on those who refused to vote against it. To oppose what is WRONG simply because it comes from a man with a beard standing in front of a sign they used to trust.

I don’t know why I’m sending this to you, except that football has always been a place of safety and peace to me.

Your side is all that matters, whether that means hatred of people from other countries, other clubs, other religions or other skin colours.

I’m a Fulham fan. I feel as if my club and its supporters are the personification of friendly liberalism, of inclusive Remain, of welcome to everyone from anywhere so long as they are receptive to that welcome.

For two decades now I as a 33 year old man have either been delighted and celebrated with away fans embracing the atmosphere of inclusion at the Cottage, or shrugged off the rare occasions they have looked to cause conflict and discord as simply a few bad apples, taking their support too far in excitement.

It’s hard now to look at what is happening to my country, with hatred and division on all sides and all aspects of life and ignore that when it comes to matchday.

I don’t expect this to be published. I don’t even expect people to agree with me anymore, after the last 3 years of Red people voting Red and Blue people voting Blue against all evidence and logic, ignoring those parties who actually shout out for what those voters claim to stand for.

I just wanted to express my deep and abiding sadness for the triumph of partisanship over morality.

Whether that be sporting, political or nationalistic.

Love you all. I’m sorry that’s not returned.

…With the election done and results out, can we please refocus on just football mails?

I get that some level of politics will be in the mailbox, since football intersects with race, sex, income, and their issues etc. And we all include some off topic stuff in our mails all the time too. This is all fine.

But they have been mails published of late (mainly 3 days ago) that have most of their content (and even one case, 100%) lobbying for vote for a particular party and in my opinion that crosses a line in a more specialized sports website like this.

For the record, the majority of the published mails in that timeframe do not fall under this but in my many years of reading the site, it was kinda alarming to read even if it was a few. (and no, I’m not taking about stuff like racist chants in stadiums, that is completely on topic and fair game)

Not saying people should not care about these issues especially in these charges times in UK but its called Football365 for a reason and there are plenty of other arenas where you can engage in this.

Anyways just to break my own “no politics” suggestion a bit, the people have spoken with their votes. Congratulations to those that have won their seats – whatever your party or policies. You have been given a great honor by your constituents, so please do not let them down.

No matter how imperfect it is, democracy is good. And it is not a right available to all countries. Malaysia has it, because you guys (UK) gave it to us. If nothing else, be proud of that.