Home Mailbox Why England actually *should* pick their best U21 side 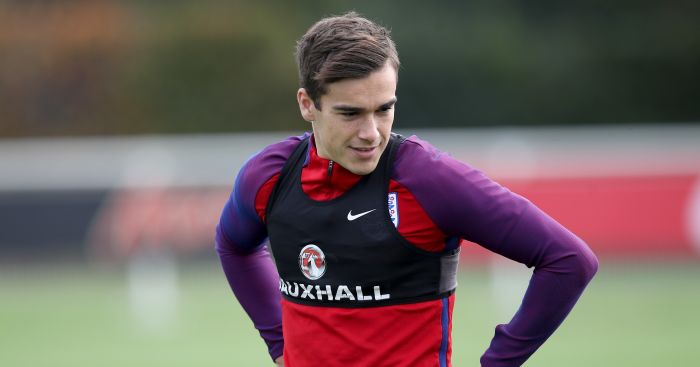 Then Harry Winks and Gareth Southgate raised the potential for senior squad members to represent the side at next summer’s finals, and a nice, idle diversion turned into a genuinely practical consideration.

That this immediately strikes me as a rather splendid idea – and not, as it might have in the past, as a completely feckless way to further run tired players into the ground – is a testament more than anything to the success of the FA’s and Southgate’s youth policy. Namely in the extent to which there appears to have formed a genuinely meaningful link between the various youth teams and the seniors, in the manner of how they play, and the potential for progression (what an opportunity an U21 call up must feel like today, given the recent glut of promotions, compared to only 2 or 3 years ago).

Potentially sending a squad including Solanke, Sancho, Mount, Maddison, Lookman, Nelson, Winks, Cook, Foden, Barnes, Chilwell, Sessegnon, Gomez, Wan-Bissaka et al seems like an excellent opportunity to gel together in a competitive tournament environment a group of players with very real potential to contribute to the senior side a year later at Euro 2020.

For what it’s worth I’d be inclined to leave out Rashford and Dele, given that they’ve been out of the youth setups since 2016, and have the benefit of two senior tournaments’ experience. It would seem counter-productive to bump aside, say, Ademola Lookman and Mason Mount to bring them in. Possibly RLC and Trent too, with their involvement in Russia and the abundance of options in their positions.

But taken seriously next summer’s U21 tournament could be an incredibly productive few weeks for an extremely talented group of players – effectively a high-intensity training camp for what might amount to half of the next World Cup squad. It’s been a quiet process (“England DNA” powerpoints notwithstanding), but the fact that we can look upon a youth tournament in this manner – as something with not just the potential to forward player development, but team and squad development – shows that, finally, England have in the FA a capable steward for the national game.
Errol Thomas, LFC

More Love For Gareth
I’m Nigerian, but I love Gareth Southgate. It’s refreshing to see a national team manager who’s not afraid to make the difficult choices in player call-ups and team selections. I’ll be the first to admit that this ‘love’ is probably borne out of envy.

This international break, I saw the Nigerian national team, our beloved super eagles, play with a dynamism I never would have guessed was even remotely possible. Alex Iwobi playing in the number 10 role, behind Odion Ighalo was beautiful to watch. Etebo’s driving runs and incisive movement in a deeper role beside Ndidi was something I never thought I’d see.

The tactical tweaks that brought about this new and some what improved eagles( there are still flaws) were only possible because of the absence of the coach’s favourites.

We have a coach who’s stuck in his ways, our back up goalie is the back up at his club, a Nigerian club, the first choice is (yes you guessed it) a Nigerian. The highest goal scorer in the Nigerian league, Junior Lokosa, shattered the record (Ahmed Musa’s) in the campaign that just ended and he’s never been called up, even when we had Odion, 5 goals in 23 caps before this break, Ighalo as our only “reliable” striker.

Gareth Southgate does have shortcomings (playing Henderson and Dier together) like everyone does. But you’ve gotta love a man who’s willing to take some risks.
Ayo (Timi MUFC was spot on with that ladder)

‘Non-scoring’ was the clue…
Hi Mailbox,

Good article on Giroud as non-scoring striker. I like Giroud. He seems like a decent chap and maybe a little bit harsh that you tell him as a non-scoring striker (he does score, but not often). But you are correct to mention he is a good facilitator.

But, I tell you who’s the best ‘facilitator’ striker at the moment. His name is Bobby Firmino. He should be mentioned in that article, too.
Vincentius, Cambridge

A Good ‘Friendly’
A really exciting international friendly (who knew?) on Tuesday night between Belgium and the Netherlands ended 1-1. I say friendly but really this is the biggest football rivalry for Belgium, which compares to England v Germany. While no Belgians like the French winning, there’s definitely a fierce competitiveness with our Northern neighbours.

There were loads of chances at either end. In the fifth minute, Mertens scored for the Red Devils with a sensational volley into the top corner. Danjuma then replied for the Oranje, who looked unusual in their light blue away kit. Whisper it quietly, but Koeman is building a good team, young and creative with attacking intent. Bergwijn, who is a young PSV winger, looked particularly tricky when he came on in the second half, and the Netherlands could have won it late on.

For Belgium, Mignolet (remember him?) played the whole game and made an excellent point-blank save from an Ake header. In the second half Hazard and Mertens were replaced, and the lesser-known Thorgan Hazard failed to impress with some overhit free kicks. Nonetheless Belgium fought well and were able to bring on Batshuayi and Carrasco, so there’s strength in depth there.

Belgium have won their two matches in the Nations League A group 2 and it looks likely they’ll be in the finals next summer. Will that be the time they finally win a trophy?
Paul (easily the most popular first name in the mailbox), Brussels

Bit Ruud
“Whatever the reason, it’s still something of a mystery why Van Nistelrooy isn’t more revered at Old Trafford.”

Surely this is untrue. A bald faced lie. Every United supporter I know holds him up as THE example to live up to for a striker. Goal poacher extraordinaire and a menace to mark inside the box. And his time is remembered all the more fondly now that we have a number 9 who needs about three-and-a-half chances to score.

You take it back immediately.
Budhaditya

Pipe down, Paul
It’s really tiring listening to Scholes constantly witter in about how United are not a good team, the players are crap and the manager is to blame.

Ever since he’s become a pundit, all he’s done is slag United off at every opportunity. That constant stream of negative blarney, (he’s not the only ex player to blame) can’t be good for anyone.

United Nations
Can I just confirm that we are NOT all loving the Nations League. In fact, I think it’s a waste of time and, quite frankly a bit over the top.
Yours,
Scotland

Double banter
So Steven Chicken yearns to see goals recreated by trained pensioners in little outfits… is he not familiar with Scottish football?

Or, failing that, Wayne Rooney has some phone numbers for pensioners who’ll wear little outfits.
Chris Bridgeman, Kingston upon Thames