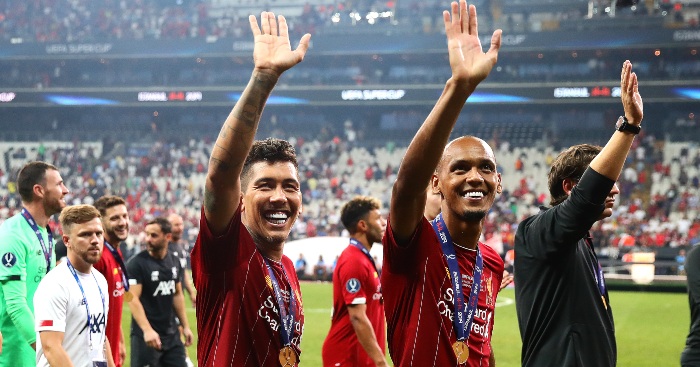 Six world class players at Liverpool
In response to David’s mail regarding players who are world class only within the system, I have to disagree with some of the Liverpool players he has mentioned.

First off, let’s clarify the definition, a repetitive and boring exercise but necessary in this context. World Class status should be bestowed upon a player imo, who makes a list of top 5 players in the world in his position. The matter of which players make that top 5 is subjective again, however some players are unanimously considered part of that top 5 by the majority of the population that follow football closely. Alisson and Van Dijk, as David mentioned, are world class, and I agree with that 100%.

Sadio Mane is without question in the top 5 left wingers in the world at this time. I don’t think Ronaldo can be considered left winger anymore, since he is pretty much a striker now, otherwise he would obviously top the list. For me, that list would include Hazard, Sane, Neymar, Mane and Douglas Costa, in no particular order. Now when it comes to systems, one could argue that Sane is another player who benefits from playing in Guardiola’s system, but I think that is insulting to the player. His quality is clear for all to see. He has phenomenal ball control, vision and dribbling skills. He is absolutely rapid, has a wicked shot on him, and is one of the best crossers in the game. Sadio Mane is another one whose quality is clear to see. He came into Liverpool in 2016 and seamlessly integrated into the team, picking up from where he left off at Southampton. He had two consecutive seasons at Southampton where he hit double figures for goals, in a team that creates minimal chances. So he was already showing signs of being a goal scorer before he arrived at Liverpool. He has not looked back since, recording double figures every season at Liverpool, culminating in his Golden Boot winning season in 18/19. He has scored winning goals for a champions league winning team at some of the most difficult grounds in Europe, the pick of the bunch being a goal that should be nominated for the Puskas imo against Bayern, where three perfect touches left the likes of Neur and Hummels for dead as he chipped the ball into an empty net. Goal scoring aside, he has elite physical attributes and is a highly effective dribbler who has planted some of the best right backs in the world on their butts.

Mo Salah is in the top 5 right wingers in the world for me, no questions asked. Two consecutive golden boot seasons, how can you even doubt it? He, like Mane, was showing signs at his previous club that he was a high level goal scorer, with consecutive double figure scoring seasons for Roma. In fact, I would go as far as to say that he is top 2 in the world in his position. For me, that list of top 5 Right Wingers comprises of Salah, Sterling, Mbappe, Bernardo Silva and Gareth Bale(Yes, I know the backlash this could receive, but for me his quality is undisputed, regardless of his injury troubles), again in no particular order.

Roberto Firmino is a tricky one. If you were to make a list of the 5 best “strikers” in the traditional sense, he doesn’t make the list because he cannot match the goal tally’s of the likes of Ronaldo, Suarez, Lewandowski, Aguero and Kane. He is actually unique in elite football for his skill set, essentially a hybrid between a number 10 and a false 9. However, he is closest in description to a center forward, a player who contributes goals but equally is responsible for enabling and facilitating wide attackers to score. Messi is in a league of his own as far as this position is concerned. The man outscores the best strikers in the world while simultaneously playing as a number 10 and a central midfielder. Other players who match this description are Benzema, Dries Mertens and Thomas Muller(on the decline now). In my opinion, Firmino is as good as any of those players, if not better.

Klopp deserves massive credit for taking these players and molding them into a champions league winning team. However, I think more credit is owed to the individual players as well, and saying they are merely “good players who are world class within a system”, is selling them short.

P.S can Fabinho not be considered world class too? In the defensive midfield position, I can think of Kante(the undisputed best), Busquets(Only usurped by Kante in his twilight years, but in his prime was the perfect CDM, and still performs at a high level), Casemiro(phenomenal player, did the work of 3 midfielders during Real Madrid’s Golden Champions League assault period, allowing Modric and Kroos to focus primarily on creating) and Fernandinho(getting old, but as showed last season, still fundamental to City’s title winning aspirations) . I can’t think of any other CDM who is better than Fabinho at this time. If anyone has a different opinion, do share. Interesting how many top level Defensive midfielders Brazil has.
johnnyWicky, Toronto, Liverpool fan

Bobbins at any cost
I’m sat reading Ted, Manchester’s email with a pot of pasta at 5pm at my desk and am finding myself nodding along, thinking “these are very good points you know”.

They are. I’ve actually not considered the point that if a player is bobbins, whatever the cost is still a waste of money.

Nothing witty to add, just thought praise was due for getting me to think about the matter in a new way. Well played, Ted.
Jon, Lincoln.

Firstly, there’s no rule that all writers on this website need to agree on their opinions or approach to players. It would be boringly homogeneous if they did, but I’m surprised how often it’s expected.

Secondly and more importantly, while the tabloid comments about Sturridge were based on nothing more than a vague impression, and amounted to a character assassination, Seb has actually seen Maddison play and was praising him for being more hard-working and influential than his appearance or stats might suggest. It’s not knee-jerk criticism, it’s a considered opinion; “this guy looks a bit like this, could become that, but is actually…”

Personally I enjoyed the article because it drew attention to a player I think many appreciate, and told me something the writer had seen in his game. It’s an opinion piece- you can’t have those without opinions…
Paul in Brussels (each to their own, I suppose)

Finishing in Florence
Young, old, record signing or free transfer, if I couldn’t play for my beloved Arsenal I’d want to sign for Fiorentina in a heartbeat.

It’s slightly off the point John the TRAITOR was making but ever since the golden years of the early 90’s watching Football Italia I’ve dreamed of living and playing in Florence. Seeing Batistuta with his wonderful hair, that purple kit, pasta three times a day… my god what a life that would be.

As a 32 year old retired amateur goalkeeper I still dream about it every time I read the clubs’ name. Naturally it happened again today as I saw Ribery was blessed with a 2 year contract by the Viola. Even to say you play at the Artemio Franchi, what a joy.

Anyway, I’ll get back to my spreadsheet now and die a little bit inside as I finally get closure on a boyhood dream that will never be.
James, Kent.

The 53 club
I think you should write an article. Before this weekend happens. On the people who have scored 53 goals in the premier league. It seems like they have nothing in common, and they don’t. But jaysis. Look at this.

That is a great bunch of lads to put in front of your topical 7. Just add three fillers like Carlton Cole, Trevor Sinclar, and Gustavo Poeyt, who are all within one, to fill the gap and make it a 10.

The 53 club. For at least one more game week.
Dave.

Trump, Johnson, Holloway
Ian Holloway explains he’s not an idiot and understands the difference between Brexit, which “we all voted for” (52% of people over 18 who voted) and the rules set by UEFA and FIFA (actually the IFAB). Thank God for that.

The mind honestly boggles that someone who is “not an idiot” managed to earn so much money. Look forward to hearing his thoughts on solving the issues in Israel and Palestine next.
Minty, LFC

…So Ian Holloway thinks that the English FA should be able to set up whatever rules they want and ignore those laid-down by FIFA/UEFA? What happens then when and English club or the national team are involved in international football matches? Do they change their game or just get caught out by not know international rules?

Should we also tell him that referees already have ear-pieces? Otherwise they wouldn’t be able to communicate with the other officials (including VAR). It’s just that no rule has been set (by the English or the “dirty-foreign-type” FAs) to say that the officials’ communications should be broadcast to everyone.

So close
Just two more words and the headline would’ve been
Holloway in 427-word response to Brexit and handball confusion
Bet that’ll have made Sarah W happy.
Tousen Collins (Ian Holloway said a bunch of rubbish in that rant by the way.) MUFC, Lagos

Did he have a point?
Let’s keep it short as the subject just annoys the hell out of everybody.

So Ian Holloway complains about a law created by an international body, that is then applied to our game. People laugh and belittle him. But given that context, doesn’t his read-across to Brexit seem like a fair enough one?
Dave, Winchester Spurs