Home F365 Features Why I fell in love with football: Cracked pleasures and the Cobblers 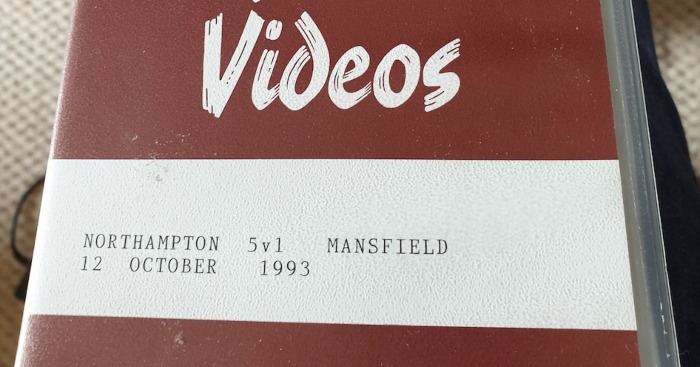 She had nut painted arms
That were hers to keep
And in her fear
She sought cracked pleasures
The passion of lovers is for death said she
Licked her lips
And turned to feather
Bauhaus, Northampton, 1981.

“If you support Northampton you’ll be in for a life of misery,” said my father, sagely. “Follow AC Milan instead.”

This was the 1992/93 season and the Rossoneri, swept along by Baresi, Rijkaard, Gullit and Van Basten, were on their way to a second Scudetto on the spin. We’d been watching Milan’s progress on Football Italia on the telly, they’d been to Napoli and slapped them 5-1 in a riot of colour, technique and advertising hoardings for exotic Italian denim, but it was too late for me, having already been drawn in by Northampton Town’s three-sided County Ground, average attendance around 2000, football quality just this side of diabolical.

Love for football is built in the summer and gruelling, joyous kick-abouts that went on ’til you couldn’t see in the dark and sometimes after. They’d got me at an August Football in the Community event on the school field where the prize was Northampton Town’s 1990 zigzag home shirt for whoever could kick a ball against a cone placed what felt like 100 meters away but was probably 10. I missed by centimetres and got the consolation prize of a t-shirt and went home in a huff via the chippy for open chips and potato wedges in a bun which was essentially three types of carbohydrate, a Northampton Eastern District speciality. Salt and vinegar half way through and a Wham bar for dessert.

This was no ordinary time for the Cobblers; they’d just survived in league football by the skin of their teeth, coming back from 2-0 down on the last day of the season at Shrewsbury; the fans had taken over the club after outing the hated Michael McRitchie and there was a game where Hereford had a record four players sent off but the Cobblers could still only draw. It was a place of arch comedy and pure drama and you could get there on the bus.

That night in October 1993 v Mansfield Town was the night I fell in love with football and the night I put my pound coin of amour into the Northampton Town fruit machine, knowing I’d never get a pay-out. Picture a football ground that just appears in a side street next to a park, picture those floodlights that seemed the brightest thing you’d ever seen. I can’t get them out of my mind. The queues in the road, dodging mounted division dung and into the ground for a couple of quid. The lads coming out of the County Tavern last minute or sometimes never at all. The ground with the pub at the back of the home end.

The Hotel End was it for me, not the family enclosure but the home terrace which seemed like a razor-wired Transformers mega-base with its exposed floodlight, its claret crush barriers and the noise reverberating off its tin roof. The toilets were open and the burgers were rank and it didn’t matter.

Cobblers were crap, that was what we knew, expectations ended with the clack of the turnstile that you always feared would trap you but never did. Instead, I got caught in between the green grass glare of the sublime and the ridiculous. Northampton had some reasonable players, the likes of Phil Chard who had won the league with Cobblers under Graham Carr a few years earlier, Steve Brown and Mickey Bell who went on to have good careers with Wycombe Wanderers. But then, perennially cash strapped, they had the kids, Darren Harmon and Mark Parsons and the old ‘uns Steve Terry and Steve Sherwood, Watford names drafted in at the twilight of their careers. There was Spurs legend Alan Gilzean’s son Ian up top, needless to say not quite as good as daddy.

We played magic that night. The Mansfield fans standing on the open Spion Kop wouldn’t have known what hit them and the home fans caught in the “what the fuck?” euphoria of seeing a team in a  rag-tag kit sponsored by ‘Carpet Supacentre!’ play like mighty Magyars. Screw Milan, we were better than them, Gilzean bagged a “that one’s for you dad” opener followed by one for the blonde-mopped teenager Harmon.

But Steve Terry’s chip tops it all, the kind of goal that still gets you a knowing look if you talk about it to those who were there. He saw the keeper off his line and placed a Miss World beauty of a chip from outside of the box into the top corner of a net that swaddled the ball with the warmth it deserved.

We were on the pitch, I did a roly-poly. We were unbeatable and the colour of the sport was ours, painted all over that ramshackle ground whose side stand was a cricket pitch. Dad was waiting for me, coming in for the last 10 minutes as they opened the gates. He thought the 5-1 scoreline on the board was some sort of mistake. The Cadbury chocolate eclair sweets that I would normally scoff within 10 minutes of kick-off remained unopened and the chants of “we want six” rang in my ears for days.

In the very next match, Northampton Town lost 7-0 at Scunthorpe United. True love, at some point, will take a run up to the penalty spot and kick you in the bollocks.

why I fell in love with football
ADVERTISING