Home F365 Features Why has Zidane risked his reputation with crumbling Real? 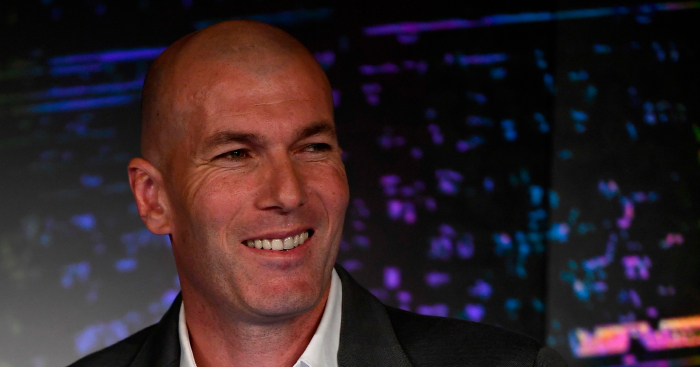 Real Madrid’s 4-1 win at Real Valladolid on Sunday was a welcome return to winning ways for the outgoing European champions, but it was never likely to save Santi Solari’s job.

The Argentine’s cards were marked after three disastrous home defeats in the space of six days ensured there would be no additions to Los Blancos’ well-stocked trophy room this season.

Losing twice at home to eternal rivals Barcelona was bad enough, but the 4-1 capitulation against Ajax that brought Madrid’s recent European domination to an end was the final straw.

Decisive action was required from the club’s hierarchy to appease the mutinous fans, and Solari – who continued to have the air of an interim manager despite being on a permanent contract – was always going to be first in line to take the fall.

While it was expected that a certain former manager would return to take the reins at the Bernabéu, it was a surprise when it turned out to be Zinedine Zidane and not José Mourinho.

Not even ten months have passed since Zidane shocked Madrid president Florentino Pérez by walking out just days after delivering the club’s third consecutive Champions League title. Though he has not been away long, an awful lot has gone down at the Bernabéu in his absence, including the controversial appointment and ignominious departure of Julen Lopetegui, and the sale of record goalscorer Cristiano Ronaldo to Juventus.

Given his record of success at the club and his standing among the fans and players, it is easy to see why Pérez wanted Zidane back. But it is less obvious to see the appeal for Zidane. Having gone out on a high, why would he want to go back and potentially tarnish his near-perfect record? This will be the first season of his managerial career that won’t end with him lifting the Champions League trophy.

The Frenchman said that he came back because the call for help came from the club he loves, and he felt compelled to answer. But that probably doesn’t paint the full picture. There must have been a greater motivation for him to go back and risk his flawless reputation.

Perhaps there is a feeling of unfinished business. Throughout his time in charge, Zidane was given very little backing by Pérez in the transfer market. His hugely talented squad was inherited from previous managers. Maybe now, with the squad ripe for an overhaul, he fancies the opportunity to build his own group of players? It is unlikely he would have returned to the club without the promise of money being spent in the transfer market.

At his unveiling, Zidane denied that Pérez had given him any promises of investment in the squad, but he did repeatedly emphasise the need for changes at the club ahead of next season.

The squad has been in need of renovation for some time, and Pérez may have belatedly woken up to that fact. In recent years he seemed more concerned with refurbishing the stadium than the squad, but dwindling attendances and poor performances in all competitions may have refocused his mind.

Some big names will surely leave this summer. Gareth Bale, Luka Modrić and Karim Benzema are all likely to depart, and the futures of Isco and Marcelo are far from secure. Anyone who leaves will need to be replaced, and the marquee signing that failed to materialise in the wake of Ronaldo’s departure cannot be postponed any longer.

Being charged with rebuilding the squad is a great opportunity for Zidane, but it is also a huge challenge, and one that he hasn’t experienced before.

In his previous successful spell in charge, he took a group of players who already knew each other and the club, and got the best out of them by instilling confidence and fostering a great team spirit. Integrating new players and getting a squad to gel is different art altogether, which can take time to bear fruit – and Madrid’s fans and board are not famed for their patience.

When he took over from Rafa Benítez in January 2016, he found a squad in far better shape than the one he has now. He had a raft of world-class talent at the peak of their powers. Now, those powers are on the wane for much of the squad, and the greatest talent of all is no longer at the club.

Securing Zidane’s return is a coup for Pérez, and the return of a legend has brought some much-needed positivity back to a club that has endured an uncharacteristically muddled time of late. But Zidane’s return doesn’t guarantee a return to success. There is still a huge amount of work to be done to bring Madrid back to the top of the tree. Appointing Zidane last time round was a gamble that paid off massively for Pérez. Now he is gambling on lightning striking twice – and the odds on that happening are far longer.