Home Johnny Nic Why I fell in love with football: Stickers and loneliness 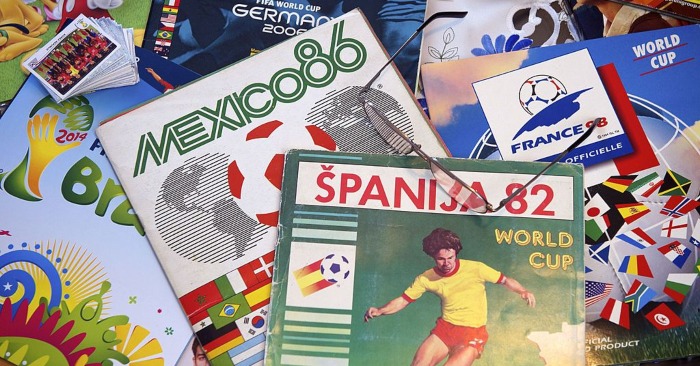 After Tom Reed wrote about why he fell in love with football, he challenged Johnny to do the same…

My lifelong love of football is very little to do with the actual game itself. I mean, yes I love football and have for over 50 years, but I didn’t fall in love because of a specific match, team or tournament, even though I watched the 1966 World Cup final. No, I fell in love with it because it gave me a surrogate family. It made me feel wanted. It gave life some structure and predictability and rhythm. It provided a universal language and allowed me to be part of a community. I learned early on that you’re never alone with football.

It all began in 1968. You’re either a collector, or you’re not a collector. I am. I could collect anything, and indeed, over the years have, from packaging to stamps, books, coins and records. If you’ve got the collecting brain, it can get out of hand, so I have to discipline myself only to vinyl records. Whereas most people get into the merchandise around football after getting into sport itself, it was the other way around for me. The memorabilia and collectables took me by the hand and made the game irresistible.

Before Panini came to the UK – the football stickers, not the bread – there were other collectable cards of footballers. One was called Soccer Stars and they came in packets of seven. The 1968/69 season was my first collection. The album featured the 22 teams in the top flight.

Kids carried around a thick wedge of swaps. I saw this, also bought the album and I was hooked immediately. The whole process was brilliant. The packet had to be opened carefully so as not to tear it and then stored flat in a draw. I kept everything and at one point had hundreds of identical empty packets. The thrill of anticipation as you opened it was almost painful, the joy of getting new additions and the disappointment of getting more you already had, drove the whole process on. I would glue the stickers into the album in its allocated place. The white gaps in the collection awaiting its sticker, a gnawing torment.

I knew every First Division squad and the bio of every player. I had close to an encyclopedic knowledge of top-flight football from that album.

The 1970 World Cup collection pulled me further into the football universe whilst educating me about the world game. I had never even heard of El Salvador until then. Each sticker seemed to have been crudely painted over and that only added to the mystery of this wildly distant place. Peru was likewise alluring with its wonderful red sash strip and just as exotic, a goalkeeper who wore a black, not a conventional green shirt. It was so exciting and it awakening an interest in the game far beyond these shores that has stayed with me.

That year I spent every penny I had trying to get an Ian Storey-Moore but failed, eventually having to order it in the post to finish the collection; which as we all know is cheating. I ended up with 12 Keith bloody Newtons though. I almost hated him for that.

Then in 1971 Esso brought out foil football badges of every club in the English and Scottish leagues. They were beautiful things that begged to be collected and poured over.

From this I learned the strips of every league club from Aberdeen to Plymouth, the grounds they played at and the nickname of the club. I fell in love with football because of all these things, along with football magazines, annuals and the huge brick that was the Rothmans Football Annual.

By now I’d started going to Ayresome Park to see Middlesbrough play in the old Second Division. Unless Graeme Souness was kicking some poor sod, the football was rarely very exciting and yet going to a game was. This always fascinated me. All my earliest memories were of loving the experience of being present, as much as seeing football. That was the thing which made me want to go. Everything from the smell of Bovril, to the craic between fellow fans, even the advertising hoardings for local businesses caught my imagination. I’d wonder who these garage owners and butchers were and what their lives were all about. Programmes too, were another chance to collect.

I had fallen in love with football completely, not just of the sport but for everything around it. And while I always watched whatever was on television, it was radio that cemented the love. I spent many nights in my bedroom with the radio tuned to a game on medium wave, constantly turning it to get a better reception. In my mind’s eye it was always a Liverpool game in the European Cup against an East German club. I felt like I was part of something listening on the radio in a way which I never did watching it on TV. Radio is intimate, friendly and reassuring, perhaps especially to an oversensitive, fretful boy like me. After six years largely away from the game between 1978 and 1984 while I discovered the joys of drink and drugs, it was radio that pulled me back in again one Saturday afternoon when Everton playing Liverpool was broadcast on Radio 2.

I fell in love with football because so much else other than watching or playing came with the passion and even though I no longer collect stickers – though the urge to do so is almost unbearably strong at times – that fact is still what keeps it in my life and it is still held there by my love of football radio.

john nicholson why I fell in love with football
ADVERTISING