Home F365 Says Why is Ashley Barnes lumped in with the lumps? 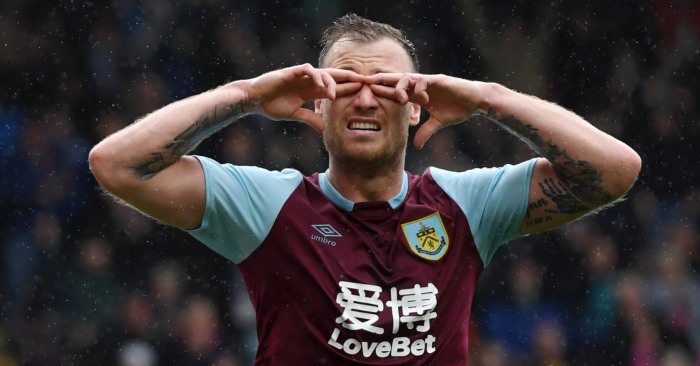 Ashley Barnes doesn’t really look like a footballer. He was also born in Bath, which is home to rugby and the Roman baths, but very few footballers. It accentuates his oddity. Barrel-shaped players with west country accents probably don’t fit the Premier League’s vision of itself and yet here he is, into his fifth top-flight season and – statistically – in the form of his life.

Burnley didn’t win on Sunday – they were held to a draw by that highly contentious late penalty at Molineux. But Barnes did score his fourth goal in three games, drilling a half-volley past Rui Patricio from 20 yards.

It’s interesting how the reputation of some players simply calcifies over time. Barnes is an example of that: no matter what he does on the pitch, they way people think and talk about him will never change. Part of that is because of Burnley. They’re often described in egalitarian terms, as 11 fragments from the same rock, and that tends to define his own, individual parameters too.

Barnes is perceived as less a player, more as part of a mechanism – or just the sharpest edge of Sean Dyche’s big block of granite. Their associations are his, his are theirs, and because Burnley aren’t covered in any particular depth, there’s rarely any cause for separation. Similarly, because most of the adjectives and verbs used to describe their performances are industrial in nature, their individual players rarely attract any sort of praise.

When was the last time that a Burnley win of any nature was characterised as something other than industrial? Instead, how often are their victories portrayed as the product of hard work, organisation and – more often than not – some kind of failure on the part of the opposition? The majority perception is that they exist solely to expose weakness. That’s a backhanded compliment loaded with negative connotations and results in blurring one Burnley player into the others.

It would be interesting to know, just as a test of this theory, how many people could pick Dwight McNeil out of a police line-up. A 19 year-old English winger with excellent left-footed delivery, a lovely upright running style and the responsibility to play in both directions; don’t we usually over-react to that kind of player in this country? Shouldn’t the click-baiters be pumping out gratuitous rumours about him already?

Barnes is a slightly different case. The original point of this article was to discover the reason behind his upswing in form. Is there something that Burnley are doing? Does he have a new trait? Maybe. If so, I’m not smart enough to see it. What is clear, though, is that he has great variation to his goalscoring, which stands contrary to his image.

Exploring that is really as simple as wondering what the reaction might have been had another player scored some of his goals. The starting point, obviously, would be Sunday, and that terrific finish to give Burnley the lead. If Sergio Aguero lashes that in, it probably becomes one of his better goals of the season.

Or the first goal against Southampton on the opening day of the season; how many forwards in the league could be trusted to convert that chance? A dropping ball, a hassling defender, but still an excellent finish. Harry Kane might tuck that away and it would further his legend. When Barnes scores from there, nobody stops to think whether he’s a slighter better player than he’s given credit for.

How about the fourth goal against Bournemouth at Turf Moor last season? It came against a beaten opponent in the 88th minute, but it’s worth watching again: the checked run which took him into space, the carved, first-time finish from Aaron Lennon’s cut-back; that was a very fine goal which, from the other side of the box, was the mirror image of one scored by Rafael van der Vaart at Villa Park about a decade ago. That’s some company.

Or, not going back quite that far, the curving 25-yarder which left Hugo Lloris stranded at White Hart Lane. Maybe the thumping finish at London Stadium against West Ham, or the slightly clumsy scissor-kick at The Hawthorns.

This needn’t be accusatory, nor should anyone pretend that, at times, Barnes isn’t prone to showing the world the less likeable side of his game. Nemanja Matic can attest to that. As, you suspect, can a few of the Premier League’s centre-halves. But isn’t his ability due a little more respect?

Maybe ‘respect’ is the wrong word. Let’s rephrase: when the second and third tier of Premier League forwards is discussed, shouldn’t he be part of that conversation? Not because he’s an elite goal-scorer, that’s obviously not the case, but rather because he deserves more than parity with players like Shane Long and Danny Ings, Glenn Murray and Troy Deeney.

Take him as a package: as a competent all-round forward who can lead a line, be an absolute pain to play against, and who – if presented with a decent chance – has shown the ability to finish with either foot. Would you rather have Christian Benteke or Ashley Barnes at your club? At the moment, it’s not even close.

It’s a slightly contrary angle to take, but it’s intriguing all the same. Barnes exists in one of the game’s blind spots, that’s certainly true, but the mainstream is still exposed to enough of his range to warrant some affection, even if it were just in a cultish way.