Home Mailbox Why is Chris Smalling not being considered for England? 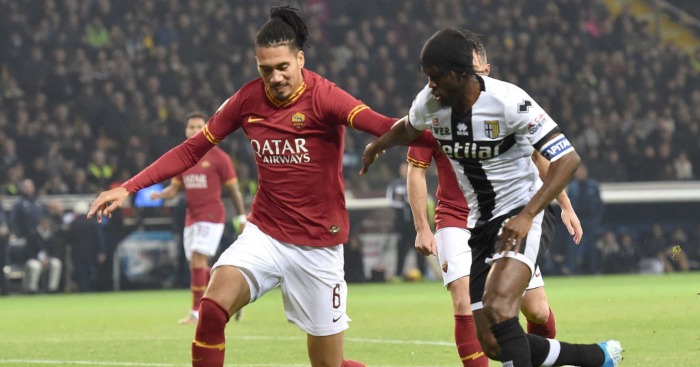 Send your innermost thoughts to theeditor@football365.com. And vote for us. Please.

Defending the yoof record
Far be it from me to defend Ed Woodward, and this mail doesn’t directly do so, but Steve in La La land appears to question the importance of our (United’s) record of having at least one home-grown player in every match day squad since October 1937. Well actually, I would wager that most United supporters appreciate the significance of this record and be proud that it continues to this day. A record which isn’t used to denigrate achievements of others, such as our number of league titles which we ram down your throat every game for example, but is more about the history and fabric of the football club.

For fear of this becoming a history lesson, I will keep it fairly light touch to provide context. The inter-war years were not great for us as we were plagued with on-field (relegation) and off-field (financial) issues. Then after WW2, and the resumption of the football league after a seven year hiatus, Sir Matt Busby came in and developed (along with Jimmy Murphy) a successful team based around youth and attacking football. Since then, the club has had incredible highs (the rebuild after Munich, first European Cup, the Fergie years) and devastating lows (Munich and the relatively fallow 70s and 80s); yet through it all there has been this one constant, a youth product in every match day squad.

Ironically, given Woodward is wearing it like a badge of honour, it flies in the very face of the commercial behemoth we have become. Even after all the record revenues, noodle sponsorships, transfer fees, debt, ownership issues etc. this is something which money and the modern game has not destroyed. It links the past to the present and is arguably a lasting memorial to Busby, Murphy, the players, staff and supporters who experienced the Munich air disaster and/or helped rebuild the club afterwards.

Although by all accounts the Academy was being neglected and underfunded during the early days of Woodward’s tenure, with City moving ahead in terms of facilities and coaching, so by all means criticise Woodward for that and call him out for perhaps (definitely) cynically using the record to deflect from other issues. Thankfully this appears to have been addressed and we’re starting to see the benefits in the first team. Hopefully this allows us to maintain our promotion of young players and continue to do so for many years to come.
Garey Vance, MUFC

Mike Smalling
Reading the gossip this morning, and a few pieces in recent weeks, are reminding me why I was disappointed Chris Smalling left United. He is by no means perfect, but he is a more than solid defender when the teams play to his strengths (as is the case with most players of course).

It is frustrating he was the one to leave, although also completely understandable that nobody wanted Rojo or Jones.

My main point though, is why is he not being considered for England? The obvious retort is that he is not strong enough on the ball. I personally think he is better than he is often given credit for, although he is definitely not at the level of Maguire, Stones, Gomez, Mings. However, while I appreciate Southgate wants England to play in a certain way, is it not useful to have another option? Typically we would think of this in the forward positions, but why is it not sensible to look at taking a defender whose strength is defending in place of 3 or 4 defenders who can pass better, but feel more likely to drop a bollock?

Not saying everyone should agree with me, or even that I’m right, however, I do feel that Mike Smalling offers a different option at the back, and should therefore be in contention (or at least the conversation) for an England squad place.

I’m sure fans of other clubs have similar types of defenders who they also think warrant a place. It just feels like there should be space in a 23 man squad for an out and out defender, even if he goes at 5th choice.
Jack (Or I’m just bored at work and desperately trying to avoid doing my job) Manchester

Shall we keep this going?
Sean from London, perhaps I should have mentioned in my previous email, but I’m not a selector for the Australian cricket team. Don’t even watch the game infact, so am not actually sure who cheated or what they did tbh. Though, as I’m not wanting to appear a hypocrite, as that was the keyword that started this friendly little exchange in the first place. Not being one to suffer cheats or fools lightly, I assure you, had I been in charge, I’d have thrown the book at them. Did you really think pointing out a limp punishment from an under pressure Cricket Australia was an argument against Sterling getting off lightly? Come on my friend.

And Levenshulme. Mate. I did point out I had no knowledge of the game where Sterling got booed and that was never the point. But if they were all rubbish and Sterling got it worst, then that is hardly fair, yet fairness and football rarely go together. The best and highest paid cop it more than the rest after all. Maybe even deservedly so? As crap as England are now, the Socceroo’s are worse. There’s always that.
Ben, LFC

Wales vs Hungary, this is huge for a neutral
So tonight is one incredible “Winner Takes It All” game between Wales and Hungary, now I for one am never truly to invested in international football unless it involves a major tournament, when it comes to the friendlies or the qualifying games I just have zero interest in watching the game, the only time I find myself casting an eye over a fixture will be if a stunning goal is scored or an injury to a player involving my team is suffered.

However, tonight the game between Wales and Hungary has actually grabbed my attention, whoever wins this game will secure their place in Euro 2020 and will not have to go through a play off game, now the last meeting between these two was back in June and Hungary won that game 1-0 thanks to a Mate Patkai 80th minute winner, a game in which Hungary had more shots, more possession and more passes, this may not be the same Hungary side that had the likes of Ferenc Puskas, Sandor Kocsis etc, but they are certainly no pushovers.

If Wales can field a full strength line up including Daniel James, Aaron Ramsey and Gareth Bale then add in the “Winner Takes It All” vibe then this could be one incredible game for the neutral fan.
Mikey, CFC (It is going to end 0-0 isn’t it?)

John, please understand that despite your own views people actually ENJOY the Premier League (and the Championship too, which has even MORE drama). This is a weekly dose of drama that for once is not centered around political or economic situations. We like to see our weekly episodes in their set times.

Will Liverpool continue their utter dominance and end their drought of almost 30 years? Will Leicester be able to muster a challenge for that of they drop points? Will City recover? What lies next in the saga of Arsenal and Spurs, and may one of them get sacked? Will Sheffield United continue their great form? Has Man United turned a corner or will they’re turn bad again?

And these are just the big narratives that people follow. There are many other stories from other clubs, especially if you are their fans.

And just because people moan about international breaks doesnt mean they don’t enjoy England or others play but nobody likes switching the channel before the next episode airs. This is especially the case if the team normal expectation is to qualify for the tournament.

England for example doesn’t have a god given right to qualify for Euros but they are “expected” to so it is not considered a high stakes event (for others fans where their team rarely qualifiy for such high level tournaments, then yes it means a lot more. I’m a Malaysia fan, I know.)

If they paused the Premier League to hold the World Cup or something, I don’t think anyone would complain from an entertainment standpoint.
Yaru, Malaysia