Home F365 Features Why is Don Revie not lauded as an ancestral hero? 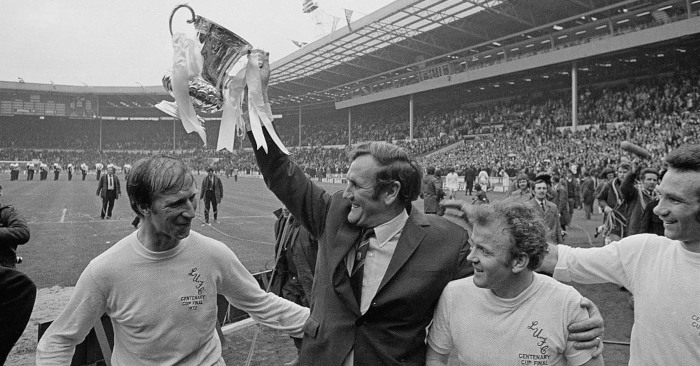 Don Revie’s name does not get mentioned very often. When it does, it tends to be as part of a binary comparison. Today, Revie has been reduced to a character in the life story of Brian Clough. He’s drawn now as Clough’s Bluto, rather than as a manager who took a rustbucket club to two First Division titles and made them one of the great powers in the land.

It’s complicated, of course. Revie’s Leeds United occupy a similar place to the Philadelphia Flyers of the 1970s or the Detroit Pistons of the 1990s – teams that were successful, but whose accomplishments have been asterisked because of how they were achieved and what they remain associated with. There’s no getting away from it, parts of Revie’s legacy do reside in the darkness. Allegations of match-fixing have always been implied, if never quite proven, and there are too many whispers about bribes and bungs to completely ignore. And that’s before considering the sensory response that Leeds’ football tended to provoke.

For older generations, England remains a malignant topic too. In the summer of 1977, Revie – who had been appointed three years earlier – revealed (by paid interview with the Daily Mail) that he was resigning his position with the national team to take up an offer to coach in the UAE.

The average wage in the UK at the time was just £3,218. The news that Revie would be earning a reported £85,000 per year was, inevitably, catastrophic for his image. England might well have sacked him had he not been pushed, the UAE in effect doing The FA a great favour. The aesthetic was too ugly to ignore. He was Revie the traitor, Revie the ingrate, and he wore that identity for the rest of his life.

Don Revie missed an England friendly v Brazil in 1977, apparently to scout Italy, in fact he went to negotiate a deal with UAE. pic.twitter.com/Kg5raLsPMi

But the aim is not to re-write history, more to wonder why Revie is now not a more regular part of the discourse. How often, for instance, is he cited in the media? How regularly are his methods and idiosyncrasies re-told? Rarely, if at all, and that’s interesting, because in a modern game obsessed with ideas and craft, Revie – whatever his standing in the sport is argued to be – was certainly an original thinker.

The dossiers are an obvious reference point and are most often used to illustrate that relationship with Clough. Revie was never actually their author, that was the job of Maurice Lindley – his chief scout – but they are an example of something which should chime with contemporary audiences. Certainly more so than – to engage the comparison again – Clough’s more laissez faire approach and his almost Wengerian faith in the ball’s primacy.

Detail is modern football’s great currency, after all. Jose Mourinho was often celebrated for the meticulousness behind his thinking, his ‘bible’ is both semi-legendary and a natural descendant of the Revie dossier. Pep Guardiola is lauded for his great attention to detail, too, as is almost every coach currently working at the top of the game. In that respect, Revie should be some kind of ancestral hero, particularly to a generation who mock Harry Redknapp and resent everything he and his archetypes stand for.

Delve beneath the surface of the Revie story and there is more compelling evidence for a kind of relevant modernity.

Todays #InstantClassic “He may have thought tactics was a dirty word, something fit for only Italians or Don Revie” @Zonal_Marking on Clough

By 1961, Leeds had been relegated back to the Second Division and in March, Jack Taylor – the manager who had taken them there – had resigned. Revie’s playing career was coming towards its end and, looking to extend his footballing life, he was on the hunt for a player-manager’s job. The obvious solution didn’t occur to Leeds initially, with Revie appearing nowhere on their shortlist. He might have been Bournemouth’s Don Revie had they not baulked at Leeds’ asking price and so, almost by default, the club fell into the hands of the man who would change its history forever.

That’s possibly the most instructive part of Revie’s career – the period of time which seems most relevant. ‘Dirty Leeds’ has endured with the dossiers and the defection, but his first phase as a manager has – by comparison – grown very dusty in the game’s annals. That should not be the case, because the challenges he faced were substantial and significant. They were financial, of course, but also technical and geographical. He inherited a disinterested group of players who had been relegated to Division Two and, within a local context, were a low-drawing sideshow in what was still very much a rugby league stronghold. Leeds weren’t a dormant powerhouse, they were large irrelevant – even within their own town.

Almost immediately after being appointed, Revie stated his aim to homogenise the club’s different teams, decades before La Masia would make that a pre-requisite. He was a Matt Busby disciple in a loose sense, evidently knowing the stories of Louis Rocca and also understanding what the true source of Manchester United’s pre-Munich power had been.

He drew a great dividend from that faith. He inherited a strong group of apprentices, including future captain Billy Bremner and Norman Hunter, but his scouting of youth was tremendously successful, particularly in Scotland. Eddie Gray and Peter Lorimer joined as teenagers and, at the beginning of the 1962-63 season, in a First Division match against Southampton, he picked Gary Sprake, Paul Reaney, Rod Johnson and Hunter in the same side. All four were 18 or under, only Sprake had played for the first team before.

Leeds fans know this history, of course. Others perhaps don’t, though, given the depiction of Revie’s sides as grizzled gangs of pirates. It’s also possible to miss how creative he was with players’ positions and how many careers were changed by that vision. Johnny Giles was not an apprentice, but when he left Manchester United to join the club he was very much still a frustrated winger. As he would also do with Bremner, Revie moved him infield with tremendous effect; Gray would go the other way, from in to out, playing on the wing for the side which won the title in 1969.

It’s intriguing, also, to note Revie’s early dalliance with the false nine position. Like the rest of the world, Nandor Hidegkuti’s thrilling performance at Wembley against England in 1953 left a deep impression on him. He actually imitated the role himself in the 1956 FA Cup Final, when he was still a Manchester City player, and would use some of its principles – the emphasis on wingers, for instance – to compensate for the periodic loss of Alan Peacock to injury.

In fact, one of the great triumphs within that part of his career, was Revie’s ability to survive without a truly excellent centre-forward. Peacock had arrived in 1964 and his signing would ultimately ensure promotion back to the First Division. But he would suffer serious injury in pre-season, leaving Leeds with a rotating cast of forwards for their return to the top flight. In small microcosm, it represents the kind of thinking which remains relevant today – that problem-solving mentality which is celebrated in, among others, Mauricio Pochettino.

Revie was certainly a man of many contradictions. As much as he’s entwined with order and discipline, and with having the soul of a data scientist, the anecdotes which litter his career – the ‘exorcism’ of Elland Road, the care shown to the wives and families of players, the curious superstitions – betrays something much more than an unfeeling automaton. Leeds wasn’t a job, it was a restoration. It was actually the kind of holistic project which so many clubs try to imitate.

The culture of togetherness has become a bit of a cliche over the years, a story for people to nod and roll their eyes to, but how many chummy insider portraits of clubs now begin with the breathless revelation that a head coach knows the name of the canteen staff? You know the type: “… and then he said good morning to Joan from accounting and we just knew then that success was inevitable.”

It’s not a negative, obviously, but it’s certainly not new or original.

Attempting to spin Don Revie’s ending is futile. For a full account, Rog Bagchi and Paul Rogerson’s The Unforgiven remains unsurpassed. But the relevance today is in wondering why he doesn’t seem to exist in the history of football, at least outside of Leeds.

Why does someone who achieved so much remain so out of focus? Particularly in 2019, when everything he represented is now valued so highly.