Home Mailbox Why is Marcus Rashford so harshly judged? 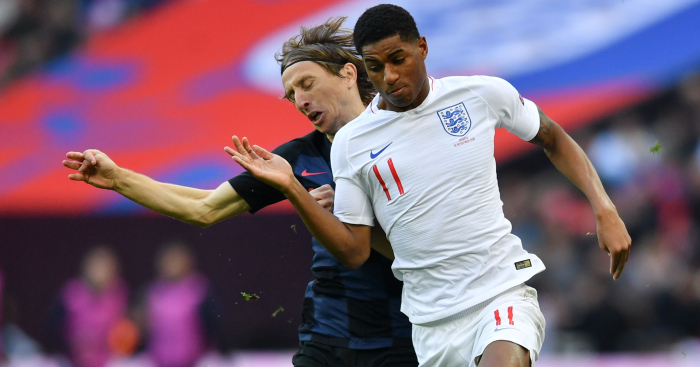 Rash criticism
There I was, expecting the Mailbox to be full of praise for England’s best player against Croatia, Marcus Rashford, and all we got was Duncan’s comment about him having ‘no end product’.

He did everything and more expected from a wide player in that game. Took it by the scruff of the neck and just started taking on the Croatians with some excellent dribbles, actually beating multiple players, again and again. It was a great example of this new England and a welcome change from the ‘pass sideways, oh look, we have more possession’ nonsense.

Duncan, you are totally and utterly wrong. If Rashford did score after one of his slaloming runs, then it would have been goal of the year contender Puskas award nominee, against the finalists of the World Cup, which would have been nice.

But he didn’t score, so what? His attitude and penetrating dribbles were exactly what I think Southgate would have asked of him.
Kireca

United behind everyone
In response to Lewe, MUFC (All the way from Addis Ababa, Ethiopia), I will agree with you that comparisons to Guardiola and Citeh may be unfair but what about comparisons to the rest of the top 6? How do Utd shape up to them?

Man Utd have spent more than all of those clubs over Jose’s reign and if you look at nett spend it looks way worse so Jose can’t complain about budget constraints against the rest of the top 6. Here’s my take, would love to hear others opinions?

Liverpool – have spent a lot of money on better players, strengthening defence and GK beyond recognition from Klopps arrival. Attack is still the envy of most clubs (except City?) and this despite selling Suarez, Coutinho and Sterling. No title as yet but them and Chelsea are probably most likely to put in a sustained challenge this season or next.

Chelsea – spend a lot every year but also tend to recoup a fair amount on those exiting. Despite having a new manager just about every year or two they also seem to win the title every year or two. And they play an entertaining game of football most seasons also (unless Jose is managing them). What could Chelsea achieve with their money and someone more long term like Poch at the helm?

Arsenal – they have made a few additions to the squad and have spent more in recent seasons than historically. They play attractive football and you’d probably have to say are punching slightly above their weight so far this season. Other clubs that lose a long standing manager don’t always fare so well, can’t think of an example off the top of my head though. Probably won’t be title contenders this season but it’s a pretty good start to the post Wenger era to build from.

Spurs – always the over achievers akin to David Moyes’ Everton (always up there with little spend but never challenged). The real kings of nett spend considering their league position every year. How the hell do they have the squad of players they have without spending any money? How the hell do they keep their talent when others can’t? Does Harry Kane exist?

I’d say Man Utd are doing worse than all of these other 4 despite spending more. The key differences in Man Utd’s failings come down to transfer strategy (or lack of) and playing style (or lack of). The club may well take some blame for transfer policy but the manager can’t be blameless. And the playing style is down to the manager. If all the bestest clubs in the league (and probably across Europe) are playing attacking football then maybe that’s what works in the modern game? Utd and Jose need to stop focusing on City and start focusing on improving themselves before they can challenge for a title, this year they have undoubtedly gone backwards.
Jon, Cape Town

Reaction to Johnny Nic
Is Nebs, Johannesburg objecting to ‘JN’ on the basis Nebs doesn’t agree with the proposal that it is unfair and plain WRONG to pay Scudamore a £5,000,000 golden handshake on top of a multi-million ££££ salary for doing what? Nebs doesn’t expand.

Does Nebs doubt or agree with the trend of pricing many people out of football in the UK? It is really hard to tell.

Does Nebs feel patronised? Maybe. And Nebs certainly harbours an injustice about not being previously published.

Which is it Nebs? Do you agree with the very richest getting richer whilst adding zip for everyone else on the backs of passionate fans (in the football context) or the GIG economy (in the more general world)? Are you are sated by F365 finally publishing your version of an alternative facts polemic?

Are you also a brilliant elitist hypocrite? If so, why can’t you just get on with JN? I do.
David LFC

…Neb I have to bite and defend John Nicholson column on the Premier league, you pick 27 words out of an article in excess of 1300 words and skew it spectacularly. This is an article highlighting the excessive costs of watching premier league football which I can tell you is far more excessive in U.K. than overseas. For example I can watch every EPL game live for €9.99 a month here in Germany, haven’t a clue how much that package would be in U.K. but you would pay more and still not be able to watch at 3:00 on a Saturday.
The article says John Nic goes and watches a Fife cup tie and talks about 30,000 going to watch 3rd division game hardly top six elitist is it.
The EPL is just a cash cow and is being set up for the elite with little thought to anything but getting more money which granted Scudamore delivered on, but that money comes ultimately from fans.
An entire article giving examples of the rip off that is the EPL and you go and prove his point, “there as none so blind as those who will not see”.
Gary in Germany

Football and politics
I know we’re straying pretty far from the football at this juncture, but I think these issues are important to the integrity of the game when states are (allegedly) using world cups and major teams in order to distract from more unsavoury pass times.

Cevski says that we should be cool with the Qatari world cup because Qatar isn’t a dictatorship but rather a “Constitutional Democracy”, which it is, like Belgium. Ergo, Qatar is just a hot version of Belgium and just as uncontroversial. You wouldn’t complain about a world cup final in Belgium! Shame that they don’t have a museum in their capital dedicated to the Adventures of Tintin, but you can’t have everything.

For goodness sake, their ruler is bound by a constitution so they can’t be like North Korea! I mean, Wikipedia does tell me that North Korea actually does have a constitution, which I had understood makes a nation ok, so now I am conflicted…

Interesting as well to read that Article 69 (stop giggling) of the constitution of Qatar allows the Emir to declare Martial Law based on some pretty vague looking criteria and suspend the whole thing. You know, the way we’re all worried Queen Elizabeth, the constitutional monarch of the United Kingdom, might do in the event of a no-deal Brexit.

In summary, Cevski says that spreading misinformation and half-truths doesn’t help anyone and I agree.
Andy (MUFC)

…Cevski, THFC takes the Richard keys approach to Qatar, “I loved it so it’s probably fine”.

Tell that to the migrant workers who get their passports confiscated and are made to work in life threatening conditions.

Lucky for us that it’s constitutionally ok to let some poor immigrants die in the heat. Otherwise that democratically empowered Emir might be worried.

I’m glad you acknowledged my point. I don’t acknowledge yours because it’s wilfully blind . You’re a white man and missed the role of women in a place you lived in for 11 years? If you hadn’t then you’d recognise something is wrong in Qatar. Or you’re a sexist white man who sees nothing wrong with the way women are treated in Qatar (and too many other places in the region)
Minty, LFC

And yes Minty, Liverpool are brilliant. Enjoy all the things your lifestyle demands like corrupt regimes in the Middle East.
Niall, Denver