Home F365 Says Why is ‘sulky’ Sturridge a target for football’s rent-a-quotes? 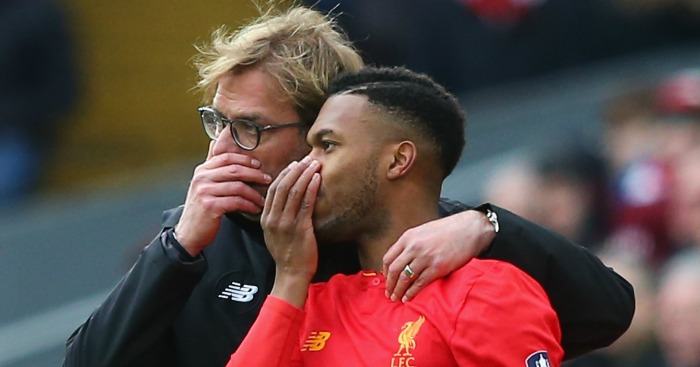 Any one of us could reel off a list of adjectives to describe the personality of former Crystal Palace chairman Simon Jordan or West Ham’s current vice-chairman Karren Brady based on nothing but their physical characteristics and presentation. Our eyes could take in a perma-tan or a power suit and make snap non-informed judgments. Or we could lazily assume that a man who described Nigel Farage as “one of the most effective politicians” in a decade and a woman who is a Conservative life peer are prone to bigotry and intolerance. But lazy assumptions, unhelpful stereotypes and half-baked opinions based on nothing but hearsay should have no place in the media.

And yet, both of those public figures – prized for their forthright (and for ‘forthright’, we can often read ‘baseless’) views – have been given a platform in the last week to utterly destroy the character of former Liverpool footballer Daniel Sturridge, a man it seems unlikely they have ever met. They certainly did not mention knowing him in any capacity, or indeed knowing anybody with intimate knowledge of his personality. And it seems unlikely that either talkSPORT or The Sun stopped to ask if they had any grounds for their damning opinions. First came Jordan:

“Not in any parallel universe would I sign Daniel Sturridge. Not for me. I wouldn’t even give him a pay-as-you-play deal. I wouldn’t want Sturridge in my dressing room or at my training ground around younger players. He’s a very, very, very talented footballer but he’s a divisive influence. Jurgen Klopp has never had him since day one he arrived at Liverpool.”

That would be the Jurgen Klopp who said this in 2015: “I said to Sturridge after the game ‘now I know what everybody is talking about so thank you’.”

And the same Jurgen Klopp who said just last year: “Who doubts Daniel Sturridge when he’s fit? I don’t. It is good for us to have him around. I am fine with him, 100 per cent.”

And – most tellingly – the same Jurgen Klopp who said as Sturridge exited the club this year: “What maybe is missed on the outside of the club by many is what a great leader Daniel is in our dressing room. He is smart, confident and not afraid to speak up when he thinks there is something that needs adapting to help the team. He has been great with many of the younger players also, so he has been so important to our progression here.”

Now Klopp did not need to say those words; he had already described Sturridge as “one of the best finishers I have ever seen in my life”. Nobody expected a character reference but the German gave one anyway, clearly mindful of the fact that there are people outside the club who blindly perceive the England striker as difficult (“I think the conventional wisdom in the game is that Daniel Sturridge is a troubled, problem player,” was one of Jordan’s other quotes).

Klopp’s comments on leadership and guidance are in direct contrast to those of Jordan, right down to the detail of his influence on younger players. Who to believe? The man who has coached him for almost four years or the former chairman of a football club hundreds of miles away?

And yet it is Jordan’s words that inevitably stick, appealing to those who subconsciously seek to have their own prejudices confirmed. And so we arrive at Brady, writing in The Sun on Saturday:

‘For all that his years under Jurgen Klopp at Anfield have been a wasteland, he can at least boast a Hollywood pad and a Pomeranian dog from his pickings.

‘Is Sturridge, as Jordan states and Klopp’s whole attitude implies, a poor team man? He certainly comes across as sulky and an unlucky loner. It is an impression emphasised by his short stay on loan at West Brom in January 2018 where he lasted two matches and three minutes of a third before limping away, goal-free, back to Liverpool where his final headline was for a betting offence last month.

‘I can’t help feeling sorry for him although he appears to have brought many of his problems on himself.’

Klopp has actually spoken publicly and positively about Sturridge on several occasions – the quotes are freely available on the internet – and yet Brady is happier quoting Jordan and drawing inference from Klopp’s ‘attitude’, even though the Liverpool manager consistently picked the Englishman in his squad whenever he was fit. Indeed, he was starting Premier League games as recently as May. Jordan said it so Brady felt like she could write it, adding an incredibly loaded word like ‘sulky’, which is in direct contrast to every description of Sturridge given by everybody at Liverpool, whether on or off the record.

Google ‘sulky footballer’ and the results point towards Sturridge, Marcus Rashford, William Gallas, Nicolas Anelka and Dimitar Berbatov. You can draw your own conclusions from that particular list; we are not here to scatter hurtful adjectives and will leave the baseless character assassinations to those being paid to be ‘forthright’ by talkSPORT and The Sun. We will not be informed solely by conventional wisdom when seeking an explanation for the vilification of certain footballers.

It has been almost five years since Sturridge himself said that “in football you can be misunderstood” and that “people have a perception of you without knowing you”. Never has that been more true than this week, when – as the Chinese proverb claims – ‘those who know do not speak, and those who speak do not know’…but are seemingly more than happy to guess for a large pile of cash.