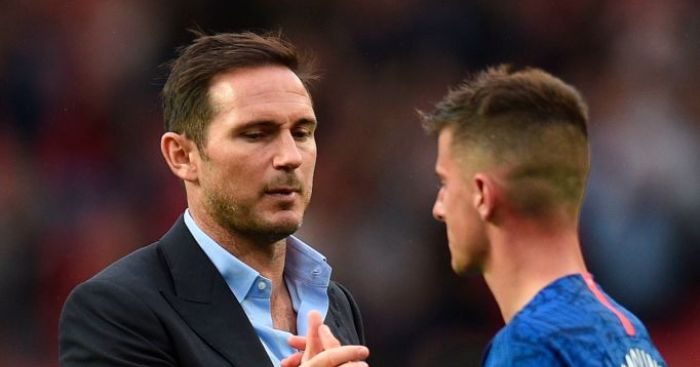 Sky Sports have presumably hired Jose Mourinho for his capacity to be blunt and provocative. Ultimately, to be compelling. His two European Cups and proven authority is, actually, somehow secondary to his spectacle –  to the accompanying subtext which follows him around: the conspiracies, the grievances, and the feuds. Mourinho is assumed to be so self-serving that everything he says acquires this unique malignancy. One of the convieniences of his slightly imprecise English, for instance, is the Machiavellian slant it puts on anything he says; it makes him far more suggestive than he might otherwise intend to be.

Over the weekend, Mourinho didn’t quite criticise Mason Mount, but he made it clear that, where he still in charge at Chelsea, the young midfielder would not have started Sunday’s game against Manchester United. Because of his reputation, that’s presumed to have a secondary meaning, one which isn’t related to Mount at all, but serves instead to tacitly endorse Mourinho’s historic reluctance to put faith in developing players.

This isn’t a new problem. When someone acquires that level of notoriety within their field, there’s a habit of finding hidden meaning in everything they do or say. It’s Shakespeare and his illusory symbolism, Hendrix playing the Star Spangled Banner at Woodstock; it represents a need to ascribe meaning where it doesn’t necessary belong.

Still, Frank Lampard responded. The tone of his incredulity probably reflected his regard for Mount. The hope, of course, is that he retains that conviction. Mourinho may be a very fine tactician, but he has often been narrow-minded when it comes to talent. He sees the game very literally and appears to judge players on their immediate worth alone, rather than with any real foresight.

He would, presumably, have seen the imperfections in Mount’s performance, rather than the potential of what it might one day become. The temptation, of course, is to side with Mourinho: he’s the era-defining coach, he’s the one with the medals. But this has been a blind spot throughout his career. He’s also the one who couldn’t get a tune out of Kevin de Bruyne or Mohamed Salah and, at Manchester United, his failure to install a proper attacking structure was behind his eventual demise.

Whatever the truth, this seems like a manifestation of that same shortcoming: a refusal (or inability) to recognise the virtues of a player whose strength and influence is predominantly focused within one half.

That’s a fairly accurate depiction of Mount and that’s a reputation he conformed to over the weekend. Referring to him as a No 10 feels reductive, because the position has very obviously changed over the past few decades. It’s no longer a passenger or luxury type – a scheming Riquelme – but rather a more mobile footballer with a longer list of responsibilities.

On Sunday, he’d shown that within minutes of the game beginning, inserting himself into a move on the far touchline, giving a pass into Pedro’s feet, and then making a third-man run down the wing. That passage of play alone was testament to the breadth of his abilities: the one-touch technique, the intelligence to anticipate space, and the optimism to try to alter a game.

‘Optimistic’ is a good way of describing him, actually. In Chelsea parlance, he’s really a sort of anti-Mateo Kovacic. In position, but also in nature. Whereas Kovacic’s instinct is to defer to basic continuity, typically by playing low-risk passes back or in-field, Mount is much more proactive. When the ball is at his feet, the play has a much stronger pulse; there’s a sense that something could happen. That was a feature of his time at Derby, but – encouragingly – could be seen at Old Trafford. If there’s a gap between the lines he’ll find it; if there’s space to exploit he’ll drift into it. It’s a slight exaggeration, of course, a wilful denial instructed by his potential, but – even now – nobody looks away when he’s in possession.

But there are two ways of assessing Mount’s performance. The first is to total his contributions and analyse them for what they were. To note, for instance, how regularly he found space away from Scott McTominay and to remark upon the issues Luke Shaw had in playing against him. Or, more generally, how smooth his interactions often were with his teammates despite their lack of a playing history together.

That’s why Mourinho’s commentary is so baffling; the detail of Mount’s performance – the passes, the presses, the touches, and the awareness – actually reflected very well on him. There were moments when his decision-making was flawed, most notably in the first half when he passed in an excellent shooting position, but that was a forgivable blemish within an otherwise encouraging afternoon.

Maybe the more telling aspect, though, was the mood of his performance. Typically, young players are not that visible on debut. Because of what starting that kind of game can potentially mean for their career, they generally perform in an inhibited way, with nerves and fear and an emphasis on not making mistakes. They worry about being dropped, rather than actually seizing their opportunity. Consequently, when a player acts like he belongs from kick-off – when he wants the ball and actually tries to use it – it’s rare and it’s striking.

In fact, it’s rarer still when that player steps onto the pitch and seems immediately comfortable with the exposure of that kind of fixture, and the responsibility which comes with playing for a club of Chelsea’s size.

Technical skill brought Mount to this point. His literal footballing worth is defined by that passing skill, that creativity and by his ability to beat defenders and change the score. But what makes him exceptional – what gives him a theoretical chance to be among the club’s finest players over the next decade – is the personality behind those attributes and his radiant self-belief.

Mount isn’t good, he isn’t promising and he isn’t just interesting. He’s special and Lampard is absolutely right to circle the wagons around him.