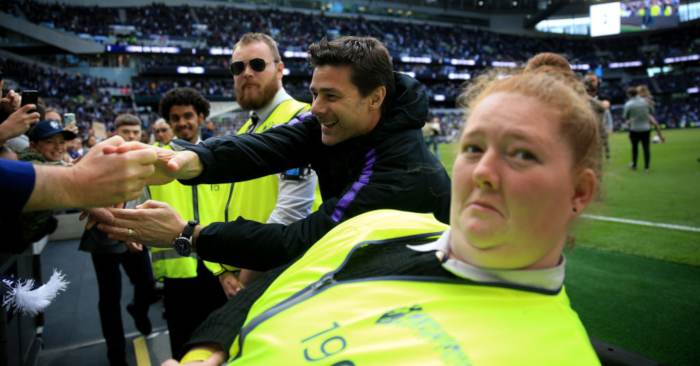 Not a happy Hammer
Martin Samuel uses his Daily Mail column on Friday to have a weird dig at Mauricio Pochettino. It’s almost as if Tottenham are playing a Champions League final on Saturday and it’s just too much for anyone with West Ham loyalties to cope with. It’s happened again…

The crux is this: when asked about the possibility of leaving Liverpool this week, Jurgen Klopp shut down the story quickly, offering a terse, immediate rejection to the notion that he could be interested in joining Juventus.

“‘Bulls*ht,” he declared. “There’s nothing true about it, I’m not going to leave Liverpool.”

‘And that was that. If Juventus were considering overtures, they know not to bother. If Klopp is pestered about the subject again on the eve of the game, he has every right to be frustrated. He can’t have been straighter. He can’t have been clearer. No means no.’

Pochettino has indeed been vague and Samuel is perhaps right in noting the slightly odd tone in some of the replies he has given about his own future. But this is nothing new. Pochettino is habitually non-committal about his employment status, a stance that has its root in his sacking by Espanyol, and this issue – in admittedly more subtle ways – has come up season after season.

Klopp has no reason not to pledge his allegiance to a club that has backed him to the hilt in the transfer market. Indeed, Samuel adds that ‘Pep Guardiola has been the same at Manchester City’ in terms of offering complete clarity over his future. Again, why wouldn’t he be?

By contrast, Mediawatch cannot think of any possible reason why Pochettino might either be reluctant to do so (no signings since January 2018), or simply feels there are more important matters at hand (an actual Champions League final).

‘Yes, being Tottenham’s manager has its own frustrations – Pochettino will certainly feel irritation lining up against Sadio Mane on Saturday – but power in the transfer market is hardly served by having to convince potential acquisitions that the manager isn’t about to dump the Champions League trophy on the doorstep, and quit.’

If Tottenham are European champions by the end of the week, Pochettino may very well take a deserved sabbatical from the game. Tottenham fans won’t want that, of course, and who could blame them? But the club stands on the brink of an historic achievement and, should they win the Champions League, they, their head coach, and their supporters will find themselves in uncharted territory with no roadmap for the way forward.

It creates uncertainty, but it’s some contortion act to turn that into a controversy or a failing on the part of Pochettino.

Oh, and Daniel Levy absolutely ‘has every right to be upset’ with the manager who took them from 6th place and the Europa League under Tim Sherwood to the Champions League final within five years, the last 18 months of which have not included a single signing. He must be bloody furious.

‘So why allow this topic to linger for so long?’

To prove a point? Because it matters not one jot what he says publicly when it comes to such private matters? Because he’s preparing for the biggest game of his managerial career?

‘Pochettino said it was ’embarrassing’ that so much talk prior to Tottenham’s first European final in 35 years centred on his short-term employment status. Then again, whose fault is that?’

Definitely only Pochettino’s and not the media’s in any way for asking the same laborious questions every week. Still, well done for previewing the Champions League final by proving that exact point.

Klopp a load of that
Besides, Jurgen Klopp is too busy shouting at Virgil van Dijk to be inviting speculation over his future.

‘Virgil van Dijk revealed the shouting and screaming which got Liverpool to tomorrow’s Champions League final against Tottenham,’ writes Charlie Wyett in The Sun.

The story is good enough to make the back page under a headline of ‘Klopp hairdryer’, which becomes ‘VIRGIL GETS KLOPP HAIRDRYER’ within the newspaper. Wyett labours that point as early as his second paragraph:

‘Jurgen Klopp gives Van Dijk the ‘hairdryer’ while the £75million Dutchman is regularly on the receiving end of rollickings from skipper Jordan Henderson and midfielder James Milner.’

It’s almost as surprising as the fact that Van Dijk does not use the word ‘hairdryer’ once. Shock and indeed horror.

Friendly Fire
Manchester City have declined to freeze their season-ticket prices next season which, given their unlimited wealth and the social challenges in their local communities, doesn’t seem particularly reasonable.

Fortunately, the Manchester Evening News and fan group 1894 have ridden to their public relations rescue:

“Whilst we feel fans generally are paying too much for football and we feel strongly that prices should be frozen full stop, there has not been too much dissent this time around about season ticket prices.

“The club have off the pitch issues to deal with and there’s an understanding of the support about this now and the fans are very much backing the owners as they have delivered what they promised years ago – to bring sustained success to the club.”

Off the pitch issues to deal with?

Like REDACTED? Or the accusation that they have REDACTED? And been accused of REDACTED the game and, as a result, might have an enormous legal bill (which they can well afford to pay without charging supporters more to watch them) in the future?

Yes, that absolutely does sound like the kind of cost which should be passed on to the fans. Essentially, stop complaining and look at all the pretty football.

Thread, as the kids say:

Breaking our Twitter silence to say that the "1894 Group" can fuck off about ticket prices as usual. That statement in the MEN is beyond pathetic and a supposed "fan group" should be ashamed. It reads like it was written by the club PR department ffs

Going live
A few desks down at MEN, the Manchester United live transfer blog is as bleak a place as you might expect.

8.44: Antonio Conte broke his silence on Inter Milan’s interest in Romelu Lukaku and Alexis Sanchez. Conte has been in that job for around 18 hours now, so that really was some silence. And there’s no update.

8.52. Things were gathering pace: Antoine Griezmann’s move to Barcelona was still on. No, us neither.

10.26: Diogo Dalot reveals that his sporting idol is Cristiano Ronaldo.

Lads, it’s probably okay to go ahead and shut this down for a few weeks.

Headline of the day
‘Diego Maradona documentary unearths secret links to cocaine and Mafia’ – The Sun.

Recommended reading of the day
Max Rushden explains why he gave away his Champions League final ticket.