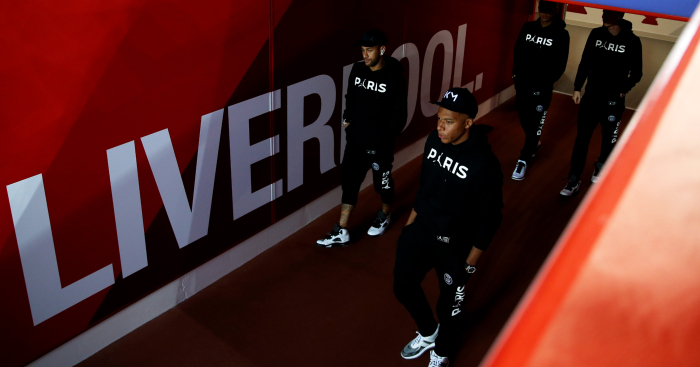 Liverpool failed in two attempts to sign Kylian Mbappe – even after Jurgen Klopp ‘charmed’ him.

Mbappe faces Liverpool on Tuesday as the 19-year-old hopes to help Paris Saint-Germain start their Champions League campaign with a win.

Liverpool harboured a ‘genuine interest’ in the striker in summer 2017, while new midfielder Fabinho hopes to “slowly convince” him to move to Anfield.

According to French newspaper L’Equipe, Liverpool have ‘long been eyeing’ Mbappe, “but few clubs have been so close” to signing him.

Their approaches have reached far beyond the point of ‘wishful thinking’, and date back to before Mbappe even made his professional debut.

L’Equipe claim that, by the winter of the 2015/16 season, Mbappe and his representatives had grown ‘impatient’ at his lack of opportunities.

He made his debut soon after however, lessening his desire to leave. But his remarkable breakthrough only led to Liverpool continuing to monitor his situation.

The Reds returned by summer 2017, at which point Klopp spent ‘several hours’ trying to convince the player to join.

Liverpool were prepared to make Mbappe the club’s joint-highest earner alongside Philippe Coutinho, the teenager having led Monaco to the Ligue Un title and Champions League semi-finals.

Mbappe was even ‘charmed by Klopp’s eloquence and enthusiasm’, but the club could not afford the required transfer fee. Mbappe left Monaco that summer to join PSG on loan in a move that became permanent for £166m.