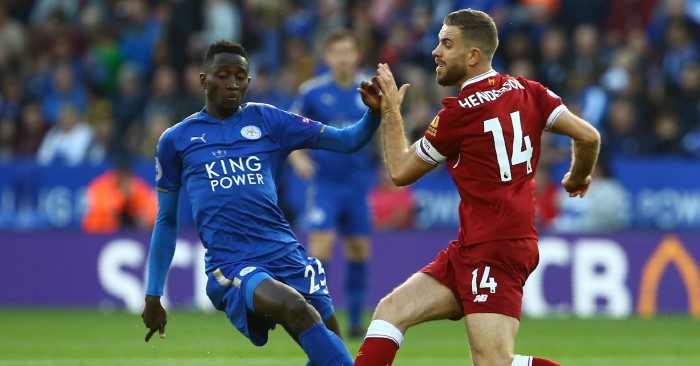 There are two reasons why one Liverpool fan’s opinion piece about the Reds’ need for a player like Wilfred Ndidi spawned dozens of transfer stories still reverberating around the globe a week later. The first is the desperation of a click-hungry sports media for transfer gossip in February and the second is that it made complete sense. This is a team without any discernible dynamism in midfield and here is a player who has made more tackles this season than any other Premier League player. Liverpool fans understandably went a little gooey and started dreaming of an Ndidi/Keita midfield that would condemn the stodginess of Jordan Henderson to the bench or even another club.

If Claude Puel spends any time at all on the internet, we hope he reads Mediawatch and thus knows that those reports are unfounded. We would hate the wonderfully unruffled Frenchman to get ruffled so soon after he had successfully fought to keep hold of Riyad Mahrez. But while quoting numbers approaching £100m for the Algerian, we cannot help but wonder about the asking price for the Nigerian, five years younger but equally vital to Leicester’s mission to reclaim European football.

Were you to believe the people we are duty-bound to call boffins from the CIES Football Observatory then you would put his value at around £58m. In a list released in December, Ndidi was rated as the 11th most valuable Under-21 player across Europe’s big five leagues. Only Dele Alli, Leroy Sane, Marcus Rashford, Gabriel Jesus, Anthony Martial and Davinson Sanchez were given higher values among young Premier League players, and two of that number have since turned 22. It will not have escaped your notice that all of those players are at top-six clubs. Whether it be Liverpool or another suitor, it seems unlikely that Ndidi will be allowed to quietly excel at Leicester far beyond this summer’s World Cup. That’s not how football works in 2018.

Ndidi with another world class tackle getting us out of trouble. Absolute beast, we would be struggling without a player like him

When a player only joins a club in January and still wins the Young Player of the Year award, you know that he is special. When a player joins in January but makes more tackles than all but two of his teammates across the whole season, you know why Claudio Ranieri called him a ‘warrior’. Ndidi based his game on that of his hero Jon Obi Mikel, was compared to Yaya Toure in Belgium and has walked (scratch that, he never walks) into inevitable N’Golo Kante comparisons at Leicester; you can certainly see traces of all in his relentless running and prolific tackling.

The tackling is the headline statistic (113 successful tackles with Everton’s Idrissa Gueye a distant second on 85) but that has to be tempered by the fact that no Premier League player has been dribbled past more; he simply attempts a hell of a lot more tackles than anybody else, though his success rate of 62.5% trails behind both Gueye (68%) and Kante (64%). But even taken with those pinches of salt, to be that effective at 21 is simply spectacular.

“He is a fantastic recoverer of the ball, winning the ball back, and gives us possession,” says Puel, but the Frenchman has also been careful to keep using the word ‘potential’; he clearly sees his job as turning Ndidi into a complete midfielder rather than just a tackling machine. The question is whether he will get the opportunity to complete that job or whether the task will be handed over to Jurgen Klopp or AN Other in exchange for £60m or more.

One thing that should not be difficult to improve is Ndidi’s shooting. As it stands he has taken the most Premier League shots this season without scoring. He’s probably not quite as proud of being top of that particular table.