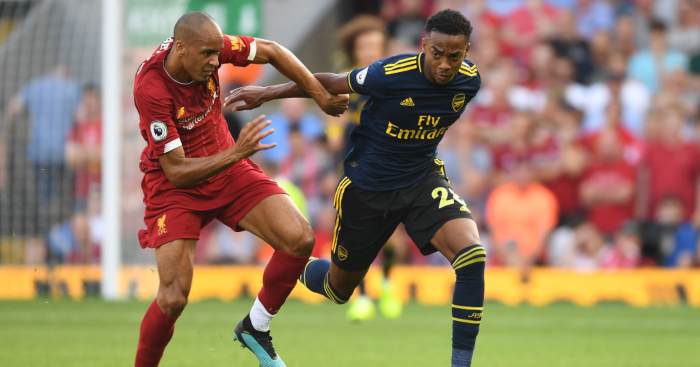 Liverpool decided to sign Fabinho over two current Premier League players because he had one key advantage over the duo, according to reports.

The Brazil midfielder joined the Reds in a £43.7m deal from Monaco in summer 2018; the signing at the time proving something of a bolt from the blue given the player’s long-standing links to both Manchester United and PSG.

Fabinho has proved a revelation in the Liverpool side, the player getting about his business in a tidy and effective manner yet letting others take centre stage and the headlines around him.

To say his signing has been a masterstroke would be an understatement, but a report in The Athletic claims manager Jurgen Klopp and his coaching staff actually considered signing Jorginho – then of Napoli – and former Sampdoria star Lucas Torreira before settling on Fabinho.

As per the report, Klopp decided in the end to go with their instincts and sign Fabinho; the Brazilian having apparently been on the Reds’ radar since his days in Real Madrid’s B team while on loan there from Rio Ave in his homeland.

The report claims that Fabinho was chosen due to his imposing 6ft 2ins frame, which Klopp felt would give him the advantage over Jorginho, who stands at 5ft 11ns, and Torreira who measures in at a more modest 5ft 6ins.

Furthermore, it’s claimed the brilliant character references to Klopp about Fabinho from Roberto Firmino, who said he’d fit in brilliantly around their Melwood training base, also proved fundamental.

Torreira, of course, went on to sign for Arsenal, while Manchester City missed out to Chelsea in the battle to sign Jorginho; however, it’s safe to say Liverpool supporters will have been happy at the club’s choice.