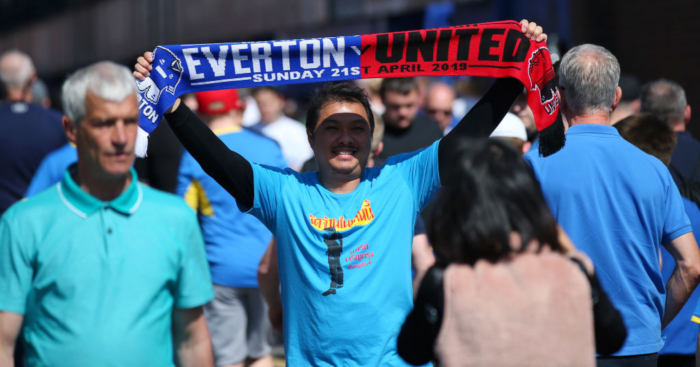 According to my doctor, I have synesthesia. This must be why I’ve always been fond of synthesizers. Boom and indeed, boom. But no, really, it is A Thing. Y’see, I can’t be neutral in any game of football. I can’t not want one side to win more than another.

Sometimes it is a burning desire for a team to be victorious; sometimes it’s a merely a leaning. But it is always there and while there are sometimes vague or distant reasons why, more often than not there isn’t. I just have inexplicable biases. Even if I come across a game at random and have no identifiable allegiance to either side, even if I don’t know the names of the teams, as soon as it kicks off, within a few short minutes I know who I want to win. It has been this way since I was small.

If I come across two teams in the park in the 10th tier of amateur football, it doesn’t take long before I take against or for one side. Not overly lustfully, in all probability, but enough to make my heart sink a little when the team I’m already calling ‘the opposition’ stick one past ‘us’.

This instinct has always felt somehow connected to what I now know is the synesthesia I’ve experienced since I was little. It feels like it occupies the same psychic space. Even when sober, I experience some notions as colours. The number five today is blue. Monday is egg yellow. A saxophone is bright orange. Belgium is burnt orange. Los Angeles, on the other hand, is white with a thin blue trim. I don’t have to think about these things, they’re just obvious to me in any moment. Weirdly, football clubs provoke this too. But they are not usually a colour you’d associate with the club. Leeds United are red right now; Manchester United feel brown today; Shrewsbury Town a rich grass green.

But these notions are not permanent. My synesthesia is an ever-moving shade card. I feel the colours powerfully each time I’m considering the concept but they can vary from day to day.

As a teenager, the reflex of siding with clubs used to bother me a bit because I didn’t know anyone else who was like this. I thought maybe it was a sign of insanity. After all, it doesn’t make any sense and it is of no practical use. So I used to try and shape it or give it reason and meaning by rooting for the most northerly club in any tie. But it didn’t work. There were always problems. My incomprehensible biases would kick in regardless and override any discipline I tried to impose and if Stoke were playing Everton, for example, I’d want Stoke to win. For Preston v Leicester, I’d be backing the Foxes. I tried to force myself to oppose London clubs too but failed because I often wanted Spurs and The Orient to win for no reason I could fathom.

It’s not the end of the world if the team I want to win doesn’t. It doesn’t trouble me in any way. And if they do win, it is the merest lick to the dopamine receptors in my brain, a fleeting rush. But this doesn’t matter, nor does it stop it happening.

But just to confuse things more, I rarely have this feeling in any other sport. I can watch rugby of both codes, cricket, tennis or Moto GP and not be inclined to back anyone. I don’t even see them as colours.

Even less predictably and more odd, it won’t always be the same teams I side with every single time. The context within which they’re playing seems to gear how I feel. For example if Burnley are playing Arsenal I want Burnley to win, but if they’re playing Wolves I’d back against them. But if Wolves are playing Huddersfield, I support the Terriers. But if they’re playing Newcastle, I’m a Mag through and through. And on it goes. Any division you like. If Peterborough are playing Burton, I’d want Burton to win, but if Burton are playing Rochdale, I want the Dale to be victorious. Queens Park v Annan? Of course it has to be Annan. Absolutely no question about it. I even do it for European games. Empoli v SPAL? Deffo SPAL. Inter Milan v Roma? Inter. Schalke v Hoffenheim? Can only be Hoff.

I cannot explain this at all. They are innate snap judgements which are strongly felt. This coming week in the Russian Premier League, Yenisey play Orenburg. I know literally nothing about either but I already clearly want Orenburg to win. I cannot tell you why.

Some of my supporting tendencies I can root in specific instances – though why these have remained in place when others have evaporated is a mystery. For example, I’ve always been very pro-Carlisle United despite having no connections in any way with the Cumbrians, but I think it stems from 1974 when they briefly and incredibly topped the First Division having being promoted alongside the Boro the previous season.

Somehow I got it into my head as a 13-year-old Teessider that they were an honorary northeastern club and thus deserved my good will. They also had Chris Balderstone in the team who I was fascinated by because he played football and cricket, turning out for Leicestershire in the County Championship. This seemed irresistibly noble and brilliant. And even though it was 45 years ago now, these specific affections have stayed with me. So in any albeit unlikely game between say Liverpool and Carlisle, I’m rooting for the Blues, but between Liverpool and Manchester City, I’m supporting the Reds. But if City are playing West Ham, I’m on City’s side.

I first felt an affection for Liverpool in 1977 after David Fairclough’s winning goal in a 3-1 victory over St Etienne. The joy of that moment lit a flame in me. But even so, if they’re playing York City, Newcastle United, Leeds United, Hull City or Lincoln City, then that Fairclough-based feeling is overruled. Look, it’s all very complicated. Put them up against St Etienne now and I’d want them to win, but if they draw Malmo, Rapid Vienna or Steaua Bucharest, then I’d have to ditch them in favour of the European side.

At times this madness gets wearing and I find myself wishing I could be free of it, so I sought medical advice.

My new doctor, a cool guy with wild hair and beard who wears trainers, jeans and t-shirts in the surgery and actually swears during consultations (“f**k me, that must be weird for you”) tells me all sorts of people have all sorts of variations of this condition and that it’s nothing to worry about.

“You’re not mad, if that’s what you’re wondering. Ask your readers, plenty of them will have similar experiences relating colours to numbers, names or inanimate objects, or favouring one team over another for no apparent reason. I’ve seen people who even do that with foods. Strongly pro-avocado but hugely against carrots. And it’s nothing to do with the taste of them. We don’t know why it happens really, it’s just how some brains are wired,” he said, before adding mischievously. “Personally, I think it means you are all aliens.”

Fair enough. But what if there’s a game between Aliens and Earth? Already I know I’ve got to get behind the Aliens on that one. I mean, that’s just obvious, isn’t it?