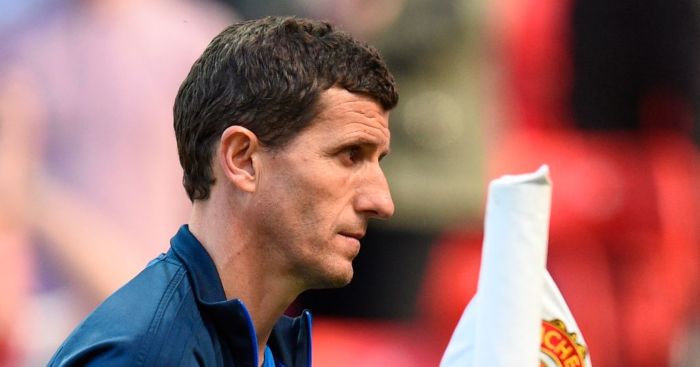 SUE VAR!
Martin Lipton does not like VAR. Understandably so, because it hasn’t had the smoothest of introductions into the Premier League and, in hindsight, perhaps the clarity around its uses might have been conveyed better.

But this, in The Sun, is a stretch.

‘The irony will not be lost on Javi Gracia.

‘Spaniard Gracia became the first Premier League managerial casualty of the season because he had failed to win any of his first four games. Five days later, the ex-Watford boss was told by refs chief Mike Riley he might have WON that fourth, crucial game against Newcastle had the VAR official done his job properly – and possibly still be at the club.’

This about the Isaac Hayden handball in the build-up to Newcastle’s equaliser. Firstly: steady on Alanis, put down those 10,000 spoons because that’s not really irony.

Secondly – come on, Martin – Gracia didn’t lose his job because his side failed to hold a lead at St James’ Park. For the Watford board, that was just the last straw after the team had lost 3-0 at home to Brighton and been played off their own pitch by West Ham. They’ve won 32 points from their last 32 games, dating all the way back to the start of November.

‘Watford could consider unleashing their legal eagles if the points they were denied on Tyneside turn out to be costly.’

Could what? ‘Unleash their legal eagles’ on whom? The Premier League? The PGMOL?

This isn’t a John Grisham novel, Martin. VAR’s introduction doesn’t mean that every bad decision now comes with legal – legal! – recourse. You don’t get to march an army of Jake Briggances into Gloucester Place every time a referee fails to spot a foul.

People are losing it.

Oh, and Newcastle’s equaliser came in the 41st minute of a game in which they had more shots on target and corners than Watford. Good luck arguing in court that they definitely would not have scored a single goal in 49 more minutes at home to a struggling team.

Shoo, VAR
The Manchester Evening Propaganda are a bit more measured with their VAR hate, but take an equally curious angle.

‘Referee chief Mike Riley has admitted that four mistakes have been made so far in the Premier League this season by VAR, one of which directly impacts Manchester United.

‘One of the decisions highlighted as an example was the decision not to send off Leicester City midfielder Youri Tielemans for an apparent stamp on Bournemouth’s Callum Wilson prior to the international break.

‘As a result, the Belgian midfielder is available for selection this weekend when United lock horns with Leicester and, given his importance to Brendan Rodgers’ side, that presents a significant boost for the Foxes.’

That is phenomenal one-eyedness, a perfect example of things being viewed solely through a Manchester United prism.

It’s not really DIRECTLY affecting United, is it? At best, it’s a secondary consequence which, in this day and age, really just comes across as an attempt to pre-equip supporters with a ready-made excuse.

But here’s the important bit: This. Is. Not. New. Players not getting suspended for offences which should have carried a card is not an adjustment that we’re having to make as a result of VAR. It has always happened. That sub-text has always applied.

Tomorrow: How something else is really, really about Manchester United.

What if we just change that to… something more interesting?
Getting QUOTES out of a testimonial is a tough ask, so fair play to the Daily Mirror‘s David McDonnell for drawing some semi-interesting bits and pieces from Vincent Kompany on Wednesday night.

Kompany accurately depicts the Premier League as a two-horse race, rightly recognising that Manchester City and Liverpool currently seem able to coast through the majority of games.

“My opinion is that, at the moment, it’s very difficult for the other clubs to compete because Liverpool and City are well-oiled machines. Each player knows what to do. I think these guys are there to stay and the other ones will have to improve fast or otherwise that gap will remain.”

True, true: both teams do have a metronomic quality to them and have done for some time.

“I think anybody could recognise they’re ahead, but nothing is granted or given. If any of them drop their attention for one bit, the tables can turn, but I just don’t see any cracks.”

Also true; that’s very sensible, Vincent. Given the circumstances, this is actually quite… oh, hold on:

Funny. He seems to say nothing of the sort. What you’ve done there is take some banal remarks, swollen them up into something provocative, and – as a result – made everyone’s chase for access just that much harder. Well done, another great day for journalistic myopia.

“Hi Vincent, can I have a quick word for The Mirror.”

See how that works?

In a not completely unrelated development…

‘Wigan Athletic mascot Crusty the Pie on meeting Peter Reid, who asked him his filling and being the darling of the DW Stadium.’

The Sun score the big interview of the week – and launch into it with this corker of a lede:

‘WIGAN ATHLETIC mascot Crusty the Pie is certainly enjoying the ‘pie’ life at the moment.

‘The baked treat made its Lactics debut against Cardiff City back in August, sharing a ‘pie’ five with Bluebirds boss Neil Warnock.’

Outstanding. Triple points for that elegant variation, too.

Flogging a dead horse
The Sun are also determined to wring the last bit of juice from the dated Alan Shearer/Michael Owen controversy, leaving Alison Bender stuck writing the strangest piece of the day.

‘I’M one for gut feelings and first impressions, and generally I’m happy to say these serve me pretty well.

‘My only regrets in life (and there are few) involve not trusting my gut feeling, but I’ll hold my hands up and say I was wrong about Michael Owen.’

Goodness, where is this going.

‘I’ve just left the TalkSPORT offices where I was doing a paper review. As I swung through the door, I joked with Alan Brazil and Sam Allardyce about Michael Owen’s reference to Big Sam’s ‘mundane’ training methods.

‘Owen was on his way to the studio to talk about his new book Reboot.

‘”That’s going to be awkward” I jested. I couldn’t be more wrong.’

Jokes. Banter. Jesting. Yes, that is how we’ve always imagined the talkSPORT offices.

‘The guest I’ve just been listening to for the last hour has been bold, funny, and dare I say erudite, even managing to have a giggle about it, rather than the bland individual I thought I knew.’

Let’s stop this there. Here’s the precis: Michael Owen was not quite as expected. Nor, latter in the piece, was Alan Shearer.

‘Once the cameras stopped rolling and the lights went out, I continued chatting with Shearer. So often the best chats are had in these circumstances. I found him light, funny and great company, a true legend.’

Right. Good. Thanks for that.

Recommended reading of the day:
Tom Williams on Wanda Nara.

Jack Lang on The Olympic Goal(£).