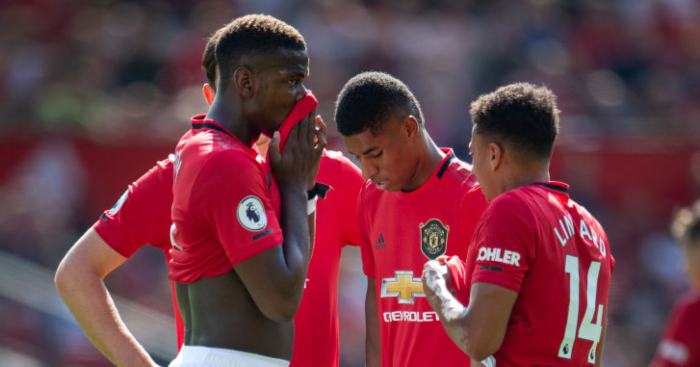 Propaganda
Mediawatch has long bemoaned the trend for some club-specific journalism to act as mere propaganda. The message is usually pretty clear: The club (let’s say Liverpool) is brilliant and you are brilliant for choosing that club (Liverpool, as an example). Everybody is therefore brilliant and the clicks come rolling in.

So it turns out that Manchester United are only lying in eighth with a paltry five points because of ‘a combination of bad luck and superb opposition goalkeeping’, a conclusion they have made based almost entirely on the concept of xG. As United keep out-performing the opposition based on xG, it can only be darned bad luck and a succession of Gordon Banks-style performances that have conspired to keep them mired in mid-table. What other explanation could there be?

Well obviously, the other explanation is that they are a bit shit.

That seems to be backed up by statistics that Carney chooses to ignore – namely that United have had more shots off target than any other Premier League club this season. Yes, they have taken a lot of shots – and that certainly boosts xG – but 28 of them have entirely missed the target. Is that because of bad luck or because the ‘superb’ goalkeeper has somehow distracted the unfortunate shooters? It must be one or the other.

But never mind that, check out the xG, which puts them in second – above Liverpool – in a table included in the piece.

‘These numbers suggest to me that Ole has us playing a positive brand of attacking football that should start to pay dividends sooner, rather than later.’

And they suggest to Mediawatch that Manchester United are taking the wrong shots at the wrong time. But then we are not desperately trying to dupe fans into thinking that actually, losing to Crystal Palace at home and throwing away a lead against Southampton was absolutely not the fault of a team that are just brilliant. And aren’t you just brilliant for choosing them?

While we’re here…
On an entirely different subject, the Liverpool Echo’s project to attract US fans of the brilliant Reds – Liverpool.com – continues to churn out massive amounts of content.

Editor Kristian Walsh was very clear on Sunday that all the kerfuffle about Sadio Mane’s reaction to his substitution should be largely ignored, just as soon as you had read his definitive piece:

‘The only Mohamed Salah and Sadio Mane ‘conclusion’ you need.’

Just over 24 hours later, it turned that you actually needed another…

Why stop there, fellas? Surely you can squeeze out another; those devoted Reds might not have quite got the message yet that Liverpool really are loads better than Manchester United.

‘Does that really say that?’ headline of the day
‘The demise of Barcelona and Real Madrid shows Liverpool how not to approach rebuilding a football team’ – Liverpool.com.

The ‘demise’ of the current La Liga champions who have won seven of the last ten Spanish titles?

Yep, Liverpool really should do everything in their power to avoid that fate.

Flirty dancing
FLIRTY SANCHO is the headline in The Sun as ‘Jadon Sancho opens door to Man Utd transfer but flirts with Barcelona and Real Madrid over possible move’.

The entirety of Jadon Sancho’s ‘flirtatious’ quotes when asked if he would be interested in a return to the Premier League:

Starmaker…dream breaker
‘UNAI EMERY has offloaded an entire Arsenal team this summer after sending Henrikh Mkhitaryan to Roma on a season-long loan,’ writes Mark Irwin in The Sun under a headline that says Emery has ‘dumped 11 stars’.

Mediawatch is not sure what is more amusing – the idea that 37-year-old Petr Cech’s retirement was somehow the result of Emery’s ruthless cull or that Carl Jenkinson is a ‘star’.

Unai who?
But Unai Emery has not been ruthless enough because Paul Merson claims “it’s like Unai Wenger” is in charge at Arsenal. We have to agree; apart from changing almost all the players, he’s doing exactly the same job.

Merson argued on Sky Sports that Emery missed a trick in not signing one midfielder this summer.

“I look at him and wonder why Arsenal didn’t sign him.

“He is better than the midfield three that played against Tottenham.”

Vardy boys
Stan Collymore writes in the Daily Mirror that Jamie Vardy should reconsider his international kind-of retirement, writing that he ‘has been the hottest English No.9 in the Premier League at the start of the season’. Which is bollocks, of course, because Tammy Abraham and Ashley Barnes have both scored more. But anyway…

‘The hunger and desire he has shown to get to the top is admirable, and you always need players who can say, ‘I had to fight, scratch and scrap for my career from my days in non-league – you youngsters don’t know how lucky you are’.’

Which is of course exactly why France won the World Cup.