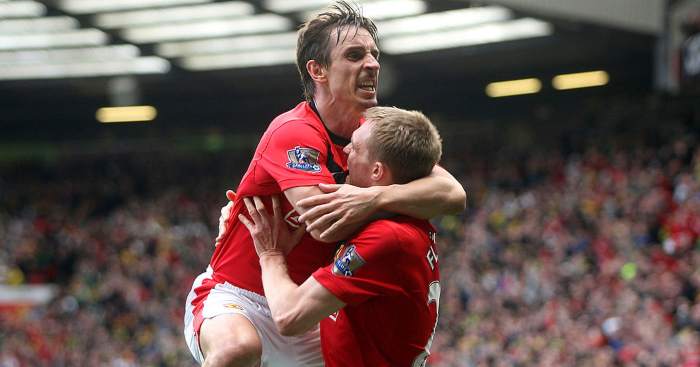 The Red Devils finished 31 points behind their arch-rivals in the Premier League last season, as Jurgen Klopp guided Liverpool to within a point of eventual champions Manchester City.

“I don’t sit here every day as a United fan and think my world’s ending. I just see it as a cycle. I grew up for the first 18 years of my life and I didn’t see a league title at Manchester United. And the next 20 or 25 years was glorious. It was like heaven,” said Neville on Sky Bet’s The Big Debate.

‘What I’m saying is, Liverpool, City, Tottenham, all these clubs have had poor recruitment policies over the last 25 or 30 years at times. So United are going through one at the moment.

At this point Jamie Carragher interrupted to point out that they won’t win a European Cup again before Liverpool. To which Neville continued: “Maybe not, but I think they’ll win a league before Liverpool.

“They’re more ripe, they’re closer than you think and it’s not as bad as you think. That’s always the way it is.

“And Liverpool, Salah’s going to leave in the next 12 months, I can see it already. He [Carragher] knows, he won’t say it. I can see it, you can feel it, you can smell it, you know when a player’s like…”