Home Liverpool Why Scots are so very grateful for Andy Robertson… 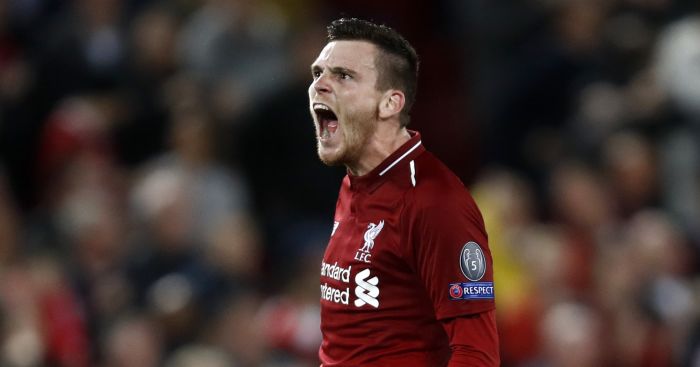 Andy Robertson‘s rapidly inflating reputation at Liverpool and in the wider English game is obviously pleasing to Scots. No surprise there. You’d expect us to experience a glow when one of our own is spoken about so encouragingly by the aristocracy of the game.

But in all honesty, that glow we feel? It casts a sad shadow.

Do I wish there were as many Scots playing with the Agueros and the Kantes as there used to be playing alongside the Hoddles and the McDermotts? Well, of course. Apart from anything else, that kind of representation of Scots in arguably the highest echelon of world football would only mean that our national team was a damn sight better than it’s been for, oh, half my wretched life. And an even halfway tasty national team is something Scots want more fervently than England fans can possibly grasp. Please, you don’t know what ‘hurt’ is. At least you have July the 30th 1966. To paraphrase Alfred Lord Tennyson, ’tis better to have won and lost than never to have won anything. Of any description. Ever.

Despite this, I suspect that a good few English people will be every bit as pleased as we are to see a Scot tearing it up in the big playground. Possibly more would feel as we do, but in reality fewer and fewer English football fans were even born when a top-four club would, without anyone batting an eyelid, feature four, five or even six Scots in their starting line-up. It really is hard to believe.

I look at the dearth of Scots at the top table, compared to the Sixties, Seventies and Eighties and I wonder, what the hell was in the water back home back then? We’ve never been the healthiest nation in the world. But not that long ago we routinely sent down to England valuable, exciting, stand-out players who performed with undeniable verve and aplomb, testing and acquitting themselves against the absolute best. Incredibly, Leeds United’s starting line-up during their harum-scarum charge to the European Cup Final in season 1974-75 routinely featured seven Scots (goalkeeper David Stewart, Frank Gray, Gordon McQueen, captain Billy Bremner, Eddie Gray, Peter Lorimer and Joe Jordan). Seven! I smell a movie.

But perhaps such tartan ubiquity is just an anomaly of ‘old football’, like how Glasgow Celtic were famously able to win Britain’s first European Cup in 1967 by fielding 11 players born within 30 miles of Parkhead. This astonishing stat smacks of lace-up footballs and heavy-booted nostalgia today. And maybe that’s all that past Scottish representation can be attributed to; plus the fact that there was no real foreign market for players. You may argue that, had Leeds had access to a wider talent pool, they may not have been so welcoming to Scots. But then again, why sign Johnny Foreigner when a 65 per cent Scottish team can get you to the European Cup Final?

So what about now? There are a sprinkling of Scots in the Premier League, such as Fulham captain Tom Cairney, Cardiff’s Callum Paterson, Southampton’s under-used Stuart Armstrong, the increasingly visible Scott McTominay at Man Utd and the venerable pair of James McArthur at Palace and Robert Snodgrass of West Ham, but most tend to exist in the grey areas of perpetual loan deals and post-academy hopefulness, such as Elliot Watt at Wolves. The situation is possibly not as desperate as in recent years, but that’s not saying an awful lot. Hence the love for Andy Robertson.

I would even venture that the rise of the pacy Glaswegian is welcomed (to an extent) in those parts of Liverpool where dwell the nasally blue. Let’s face it, Everton’s willingness to harness that big-hearted, take-no-prisoners Scottish DNA has produced some of the most iconic Toffees of all time. From Jimmy Gabriel and Alex Young in the Sixties, through Andy Gray and Graeme Sharp, to David Weir and Steven Naismith.

And then we come to Duncan Ferguson. Still prowling the corridors of Goodison as an assistant coach, Big Dunc was probably the last Scot to arrive in England’s foremost league with a fanfare of expectation trailing in his wake – the kind of hyperbole accorded to Charlie Nicholas or Kenny Dalglish when they made their way south.

Admittedly, other Scots have come to England since Ferguson and done quite well, but anyone who saw him play would concede he was a cut above. On his day, every bit as unplayable and inventive as Ibrahimovic or Gullit, Fergusonshould have been a much, much bigger star. But when he shone, oh brother. I remember his Scotland home debut against Germany at Ibrox in 1993. He hit the bar with an overhead kick that actually caused the ball to burst into flames en route to the goal. And while my memory may be playing tricks on me, it’s probably just because it has been so very long since a Scot brought some footballing joy into his compatriots’ hearts.

We rank and file foot soldiers of the Tartan Army have been very sad for so very long, but this is why Andy Robertson makes us so happy. Long may he continue to do so.