Home F365 Says Why settle for promise of Maguire over proven Koulibaly? 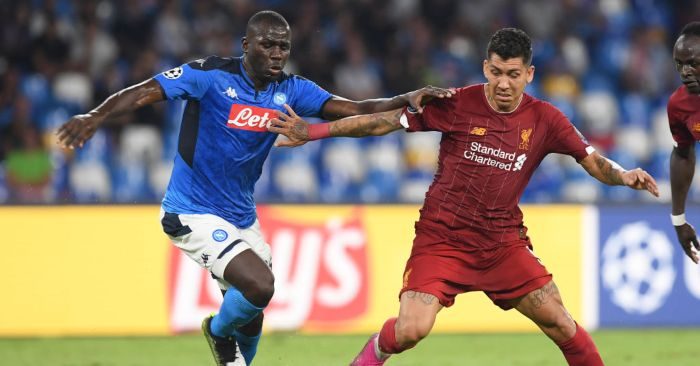 When it comes to the English clubs and how they perform in Europe, particularly the Champions League, there is plenty of surrounding hyperbole. Last season, the Premier League took a lot of deserved praise, though much of it self congratulatory, for having four teams in the two major European finals. But it didn’t necessarily foreshadow another era of domestic domination in the continent as some claimed. Equally, the fact that Manchester City were the only side to record an opening night victory in the Champions League doesn’t mean anything is majorly wrong with the structure of the game on these shores.

There weren’t many expecting Liverpool to fall to Napoli just 109 days after lifting their sixth European Cup, though, despite the fact they had done exactly the same at the Stadio San Paolo in last season’s group stage. Dries Mertens and Fernando Llorente scored in the final ten minutes to send Jurgen Klopp’s men back to Merseyside with their tails between their legs.

As enthusiastic and hyperactive as he can often seem, it is hard to imagine the German panicking about the Reds’ chances of winning or even progressing from the group just yet, but after winning all five of their Premier League games so far and opening up a record-breaking gap at the top of the table for this stage of the campaign, it is a result that could lend a little much-needed perspective as they look to balance defending their crown in Europe and winning their first in 30 years in England.

Rather than the unusually misfiring Mohamed Salah and Sadio Mane, the story of the Neapolitan night was the colossal performance of Kalidou Koulibaly. The Senegalese international defender doesn’t need to prove anything about his quality, and Carlo Ancelotti must be so pleased he was able to keep him at Napoli over the summer. He was everywhere; despite Salah and Mane squandering a number of chances, the main reason Liverpool were frustrated on Tuesday was his display alongside new signing Kostas Manolas, who arrived from Roma in the off-season.

The fact Ancelotti has been able to bolster the area on the pitch perceived weakest by many a pundit when watching Napoli is a huge plus and ensures they are in for a great season. There were plenty of suitors in the hunt for Koulibaly, and there have been for some years. Tuesday was just the latest example of why they’ll be kicking themselves once again.

Chelsea failed with a bid to lure him to Stamford Bridge in Antonio Conte’s time at the club, while Liverpool were reported last week to have kept Koulibaly in mind as a backup plan if their January 2018 move for Virgil van Dijk failed to materialise. Fortunately enough for Klopp, it did, and it is a deal that has worked out for everyone, except perhaps Southampton. The £75m price tag, mocked by thousands when it was originally paid, now looks a steal for the man voted UEFA’s Defender of the Year last season.

More recently, Manchester United were closely linked with Koulibaly before paying a world-record £80m for Harry Maguire, a player City were also courting. The transfer grapevine had Napoli’s asking price at £10m more than the fee paid for Maguire.

As good a player as Maguire is, the perception is that Leicester played a blinder in that sale. Of course, as already stated, many who believed that to be the case with Southampton and Van Dijk have all gone quiet, but it did seem a little steep to be paying such a fee for a man who did much of his apprenticeship in the lower leagues before only recently starring for England, without once playing in the Champions League. The Red Devils are not in that competition this season, but they so desperately want to be as soon as possible, and if they had a chance to get Koulibaly, they really should have grasped it with two hands.

Perhaps it wasn’t quite so simple for Ole Gunnar Solskjaer, but there aren’t very many aspects of a comparison between Koulibaly and Maguire in which the latter comes out on top. Spending big money on players with potential rather than prowess is big in the modern game, but at 26, Maguire is surely close to as good as he’s ever going to get, and he still has much to prove.

Even at 28, which is supposedly right in the midst of a player’s peak, Koulibaly probably offers better value, because unlike with a midfielder or striker, a defender’s experience is more important than their promise. Centre backs have a longer sell-by date, which is why United will believe they can get the best from Maguire. They may well do, but taking his dominance against Liverpool into account, it is hard to say for sure whether that is better than signing Koulibaly.

Across Manchester, Pep Guardiola’s need for defensive reinforcements is greater than ever. His decision not to prioritise a replacement for Vincent Kompany came back to haunt him when, after a long-term injury to Aymeric Laporte, Nicolas Otamendi and John Stones were exposed in the defeat at Norwich. To make matters worse, Guardiola has since been forced to replace the injured Stones with midfielder Fernandinho; he may have said upon arrival at City in 2016 that the Brazilian was intelligent enough to play anywhere, but he is no substitute for a top-class centre back.

With a gap to be filled, a deal for Koulibaly, who has shown how adept he is with the ball at his feet, was screaming out to be signed.

It may be a complete overreaction to panic about the collective English performance in the Champions League this week, but there is nothing hyperbolic in suggesting Koulibaly is the one that got away for a number of Premier League clubs. He is potentially the best defender in Europe right now, and after yet another huge performance this week, more than worth breaking a record for.