Home Mediawatch Why Solskjaer is the new Ferguson…Part 427 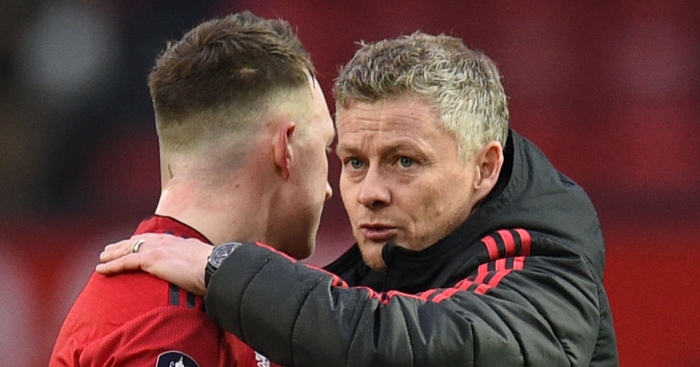 Sentence of 2019
Explains The Sun website in their story about Wayne Hennessey and his entirely plausible explanation for absolutely not making a Nazi salute:

‘The Nazi salute is widely considered to be derogatory towards German people and a reference to their former dictator Adolf Hitler.’

Yep. The Germans. It’s the Germans who get offended. Poor Germans.

Manchester Casuals
‘Man Utd star Paul Pogba walks dog at home with team-mates at winter training camp in Dubai’ is a headline you have to read several times before you work out that Paul Pogba is not walking a dog with his teammates and his ‘home’ is not a winter training camp in Dubai. Then when the penny drops, you are simply aghast that this is news. Man has not bitten dog but merely walked it.

The opening line is an absolute doozy:

‘PAUL POGBA was spotted casually walking his dog as his team-mates knuckled down at the warm-weather training camp in Dubai.’

‘Spotted’ – because he was obviously doing something wrong. And he would have got away with it too, if it wasn’t for those pesky grown men who take long-lens photographs of famous people out for a walk.

‘Casually’ – the workshy b***ard. They’re ‘knuckling down’ and he – injured, of course, but that is immaterial – is just ‘casually walking’. Like he hasn’t got a sodding care in the world.

Which poses the question: Can you formally walk a dog? Would you need to wear a tuxedo? Would the dog?

A curfew good men
Paul Pogba is joining up with his Manchester United teammates later this week and The Sun ‘exclusively’ reveal on their back page that ‘OLE GUNNAR SOLSKJAER has told Manchester United’s players they have NO CURFEW on their Dubai trip’.

So, hot on the heels of ‘Man walks dog’ is ‘Man treats other men like grown-ups’. Wake us up when the Premier League starts again.

Goal machine
The u-turn being performed by former Jose Mourinho acolyte Neil Custis in The Sun is truly wonderful to behold. Apparently ‘OLE GUNNAR SOLSKJAER has turned Manchester United back into a goal machine’, which is one hell of a way to say that they scored twice against Reading, who are currently 23rd in the Championship.

‘Mourinho said you could not teach finishing. Well…,’ writes Custis. How soon the worm has turned.

Most amusingly, The Sun have illustrated this piece with touch maps from Lukaku’s last two 90-minute outings – one against Premier League leaders Liverpool and one against Championship relegation battlers Reading. You will be stunned to know that the Belgian had ‘far more touches’ in the latter.

Basically, the Norwegian boy is a genius.

Under the influence
The ‘Solskjaer as genius’ trope continues in the Manchester Evening News with the claim that ‘Manchester United manager Ole Gunnar Solskjaer is doing what Sir Alex Ferguson did in January’.

Well, as United have not withdrawn from the FA Cup to play in the Club World Championship (oh for the days of being considered one of the best in the world), or lost at home to Leeds United, it must be something else.

And indeed it is. It is ‘go to Dubai’. Which is something Sir Alex Ferguson did a grand total of once during his 27-year reign at Manchester United.

Oh and it’s also something David Moyes did once in his ten-month reign at Manchester United.

And something Jose Mourinho did once in his two-year reign at Manchester United.

But yes, Solskjaer definitely ‘continues to be influenced by Sir Alex Ferguson’s management’.

Better the Seville you know
Not content with eking out that article, the MEN tell us ‘What Man Utd are doing to ensure players can maintain new playing style’.

Is it train? Is it watch videos?

No, it is ‘go to Dubai’. Of course it is. Because Solskjaer is a bloody genius.

And it has not escaped Ciaran Kelly that Jose Mourinho did the same thing last season. No, he positively embraces it…

‘There may be a new manager at the helm one year on, but United have the same goal in mind when it comes to their latest voyage to Dubai: legs.

‘Ole Gunnar Solskjaer and his coaching team have demanded a lot from the players after five games in two weeks and the key now is on building on that great start.

‘Ensuring United’s performance levels do not plummet in the final five months of the season. Ensuring these players have the energy to play his popular pressing game into March and April.’

Does anybody want to point out what happened to Manchester United in March last year? It begins with an ‘S’, ends in an ‘e’ and it’s not shite. Except, well, it was…

Fourcing the story
Headline on the back page of the Daily Mirror: ‘THE FOURCE IS WITH US.’

Sub-headline on the back page of the Daily Mirror: ‘Ole: United can beat Chelsea to Champions League place.’

Opening paragraph on the back page of the Daily Mirror: ‘OLE GUNNAR SOLSKJAER has warned Chelsea that Manchester United are ready to step up their push for a top-four place.’

Actual quotes from Solskjaer on p46 of the Daily Mirror: “I’m not going to say top four is our target, because my target is the next game.”

Coincidence?
From Martin Keown in the Daily Mail: ‘IT WAS great to hear Ole Gunnar Solskjaer, Chris Hughton and Frank Lampard – managers who won the FA Cup as players – talking up the competition. All three had positive results on Saturday and that is no coincidence.’

‘Fulham can forget about signing Divock Origi from Liverpool.

Graham Ruthven on US youth system

Dan Williamson on the second-tier odyssey of David Trezeguet