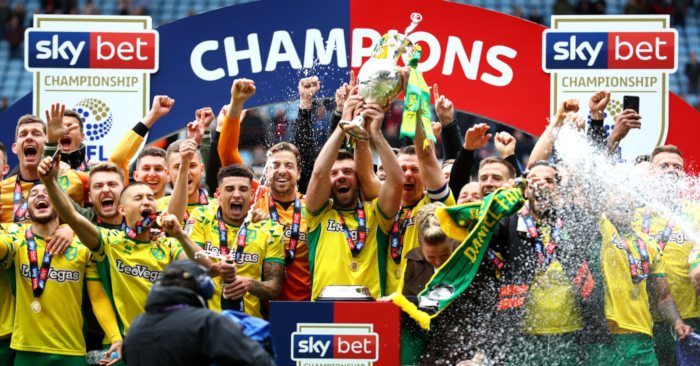 Even though Championship clubs have played their 46th game of the season and set the final league table in stone for the ages, the excitement isn’t over yet, with the play-offs to come and still – as ever in the Championship – no-one can call who will go up. Derby will play Leeds and Aston Villa play West Bromwich Albion. You can’t call those games. You just can’t. Brilliant.

That’s the league all over though. It is largely unpredictable. Three of the four play-off teams have lost a whopping 12 games each this outing. Norwich won the league still losing six, Sheffield United a substantial nine. In other words, you can lose a hefty chunk of matches in any season and still have hope. You can lose 25% of your games and still get in the play-offs. This is superb. It shows how evenly matched many of the sides are on any given day.

My own club Middlesbrough ended up seventh but conceded fewer goals than any other side, sharing that honour with Sheffield United. Bottom side Ipswich Town – who had won just four all year – somehow beat third-placed Leeds on the final day. Stoke City drew an astonishing 22 games. Brentford somehow scored 72 goals but ended up 11th.

I know "just copying Brentford" underestimates the skill of those involved but I don't know why so many clubs don't just copy Brentford. https://t.co/OAEPNqTxE5

Who would’ve thought Norwich, a side that finished 14th last season, would’ve won the title this year? Who would’ve thought Sheffield United would get promoted having finished tenth last year? Probably few if any of the fans of those clubs could have expected it but both would definitely have hoped for some sort of success. Hope is what this league gives you; it allows you to hope and to dream. To illustrate this, if the Canaries’ and the Blades’ success had been mirrored in the Premier League, the winners this year would have been Watford and runners-up Newcastle. That well shows the sheer gulf of opportunity between the leagues. The Championship, not the Premier League, is how all football should be.

Money matters so much less and, when it does matter, it is much less money. You can come down with pockets stuffed with parachute payment cash like Stoke City and Swansea this season and it makes little difference. They have finished 16th and 10th. Derby scraped into the play-offs having thrown £25 million at transfers (with consequent FFP contravention allegations), Nottingham Forest spent more still and ended up ninth. Trying to achieve success on the back of big spending so often does not work at this level.

And it doesn’t stop there. A new trend is developing. While all four clubs in the play-offs obviously want to be victorious, the three who fall short will not necessarily shed many or any tears, or at least not if they’re being run properly and are not caught up in a desperate bankrupting bid for promotion. Because financial considerations aside, time and again I hear from fans of clubs – especially those recently in the top flight – who do not really want to return there. It is simply too much fun in the Championship and even lower (why else would Sunderland get over 40,000 to see them in the third tier?)

Who wants to exchange playing in a properly competitive league for being in a league where you’re playing for nothing from day one? Surely almost no-one. With Boro finishing one place outside the play offs, thankfully the prospect of promotion has finally evaporated but it was still a possibility with 20 minutes to go, even after all these games across nine months. It’s always a relief to be able to play in the Championship for another season and I’ve felt this way for years now. As long as the club is financially stable, why would anyone want to endure winning maybe just seven games next season, perhaps drawing 11 and possibly hanging onto 17th for grim death? That’s no life.

I think everyone who enjoys football can breathe a huge sigh of relief that there's no chance of Boro's boring football coming to the premier league next season. Phew. #Championship #PremierLeague

We know we’ll have another rollicking good tilt at the Championship title next season (almost certainly under a new manager). And while we all want the glory of victory in the division, we all want a taste of that, it’s a pity to have to wash it down with a bitter glass of corked Premier League promotion.

The Premier League proponents love to sell promotion as though it is some sort of massive honour to be visiting Old Trafford, The Etihad, Emirates, Anfield etc etc. However, the lived experience of many is the exact opposite. All too often, compared to the Championship it is too expensive, too quiet, too soulless and there is too little chance of winning. That’s all worse. I would not consider it an honour for the Boro to get beaten by some of the richest clubs on the planet.

Many Championship supporters simply prefer going to a greater variety of stadiums for away games, others love the fact there are lots more midweek night games, but for most the major attraction is the fact that before kick-off, you are just not sure who will win any game. And that is such a big thing: unpredictability. And when we kick off in August, while we already know the three or at best four teams the Premier League winner will be drawn from, we have no such notion in the Championship. And I mean none. If it was the 14th and 10th-placed teams from the previous season again, it’ll be Preston and Swansea. It could be. It really could. But we have no idea.

Football is more about hope and possibility than it ever is about achievement. It’s about feeling that this year it could be your year to win it, or even to come second. Hope that a new striker, a new manager, a new goalie just might make the difference. And it isn’t vain hope. It does happen and very few teams start a Championship season without being justified in feeling like this year could be their year in some way or other

The quality of your manager matters so much. Because the likes of Daniel Farke and Chris Wilder had little budget to play with at the start of the season, they have had to rely on a winning mix of man-management, tactical nous and shopping in the bargain basement. You can be a new manager at this level like Farke or Frank Lampard, cut your teeth and prove your talent in the league. Or you can be an old experienced pro like Wilder or Marcelo Bielsa and get a team up. How good you are at the job in any one season is the important thing, not how much money you’ve got to spend.

Norwich spent £4.2 million on players and that, quite remarkably, is Alexis Sanchez’s wages for little more than a couple of months. Compared to the Premier League it feels like sanity versus insanity, healthy v sick. Sheffield United spent just six million. Both made profits on transfers with Norwich getting £22m in for James Maddison. Boro on the other hand outspent both, splashing out over 13 million, but fell well short of them. Money shouldn’t be the be all and end all. And in this league, it isn’t. Coaching, innovation, youth development and good scouting are all more important. And youth gets a chance too. For example, over half of Derby’s starting 11 on Sunday was under 24.

If anyone had backed Teemu Pukki to be the league’s top scorer, having joined on a free from Brondby, they must be a visionary. But this is what the Championship is like. Even the unfancied can have a great season. There’s none of the big £90million fee pressure, none of the disgust engendered by £400,000 per week wages plus £75,000 if they actually play. It is all far more sane and relatable. It feels connected to real life, not hiding behind the tinted windows of privilege. We watch Championship players and the first thing we think about isn’t their money, it’s their talent. And that’s exactly how it should be.

The Premier League’s claim to be the Best League in The World is at best highly debatable. Many of us know it isn’t even the best league in England. That honour belongs to the Championship: the really premier league.