Home Mailbox Why the f*** have Arsenal not replaced Emery with this man? 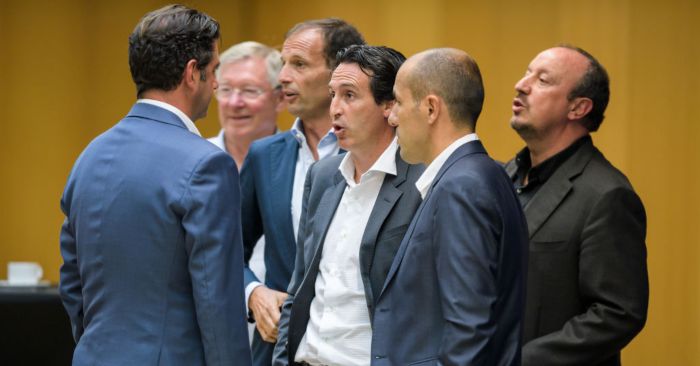 Feigning injury
Joe asks – „Why do supporters and players get so stroppy when a player is down, the ref does not stop the game – and the other team plays on as they are meant to“.

I’ll tell you why, it’s because football fans are partisan bastards at heart, and they get stroppy if it’s “their” player that’s down, and obviously if “their” player is down, he must be injured, not cheating. Most fans would be happy for their own team to play on if an opponent was down, cos it’s one of “them” so he must be faking it, right? As far as I know, a ref can stop the game at any time if he thinks a player needs medical attention, so as far as I’m concerned, it should be ‘play on’ all the time except for a clash of heads / boot to the head.

If I recall correctly, when Fabio Capello was Juventus coach (so, over a decade ago), he told the media that he had instructed his players to not kick the ball out if an opponent was down, exactly because a lot of teams had a player who threw themselves on the floor ‘injured’ as soon as their attack broke down and they were being counterattacked. The media did a round of back-patting with a side of morally righteous articles, and then continued in the same vein as ever before, and of course rival fans just accused their opponents for being cheating bastards when it’s their own players doing the cheating.

Human nature being what it is, I doubt that will ever change.
James, Switzerland

Mediawatchwatch
While I appreciate that Arsenal’s 2-2 capitulation against struggling Watford is a newsworthy result from the weekend, do you need to give our defence a kicking in your pointless summer signings and ten top goalscorers articles as well as choosing Arsenal as the heading for the mailbox, complete with a comedic photo?

I guess this is what “happens when you try and get ‘Arsenal’ into every damned headline because they are this week’s designated crisis club.”
John of Norwich

Shkod off
Of course he needs to go to another club ASAP but despite everyone’s keenness to shoulder-barge Shkodran Mustafi out of Arsenal Football Club, I still feel he is defendable.

KC this morning wondered if putting Mustafi back in the first eleven would be any worse than what we have now, and it reminded me of one of these “Instagram Stats” you see doing the rounds, and this one in particular made it perfectly clear that in actual defensive-tasks Mustafi is literally head and shoulders not only Arsenal’s most stat-tastic defender, he’s also one of the most stat-tastic defenders in the Premier League.

He’s consistently amongst the highest in terms of headers won, tackles won, blocks made, passes made, I think interceptions he was fairly decent too. He’s a really good defender. He’s bloody good in fact.

However he still needs to go because as consistent as his defending stats are, his ability to monumentally balls things up and allow the oppo to score a goal is also remarkably consistent.

I don’t know, to play devil’s advocate for ol’ Shkoddy for a moment, maybe he just needs better coaching?
Dale May, Swindon Wengerite

Short and sweet
Why in the name of all that is holy have Arsenal not appointed Max Allegri yet?
A confused Gooner

Crock of old kit
The Saturday started well as I love the contrast between Liverpool´s kit and Newcastle´s , in the sunshine too .

United v Leicester like some early League Subbuteo box followed  . Then just as I was licking my lips thinking of Wolves’ old gold against Chelsea´s all blue but with white socks and ,even more classic, City´s all sky blue against the green and glorious canary yellow of Norwich ,

Both the big away teams let my eyes down by needlessly playing in away kits, possibly to flog a few more of them which is understandable being as times are so hard .

When I saw the matches – West Ham against Aston Villa and Sheffield United versus Southampton I immediately visualised the almost beautiful kit clashes ( like the fixture computer juxtaposed them on purpose )  even more so upon recently learning that Atletico and Athletic Bilbao both ‘got’ their tops from Southampton .

Sunday was an absolute feast for my eyes ooh Watford v Arsenal like the cherries on the toffee cake  .

Then to top it all , Ansu Fati wore plain black boots throughout his incredible home debut  ! “you´re the one for me Fati” .
Peter (Dortmund -Barca will be a delight ) Andalucia .

His own response should suffice…
Any chance of a Mediawatch special on the disgraceful treatment of Ben Stokes on the cover of this morning’s Sun.
Peter (Who’s buys this s**t) Dublin

A point about the point forward
Apologies if I’m too late to reply, as I was away on a boys weekend and yesterday I still couldn’t focus enough to read – so I’m playing catch up.

Larry Bird and later stage Magic Johnson were playing as point forwards while Pippen was a child – and they weren’t the first to do it either.
Doug, AFC, Belfast