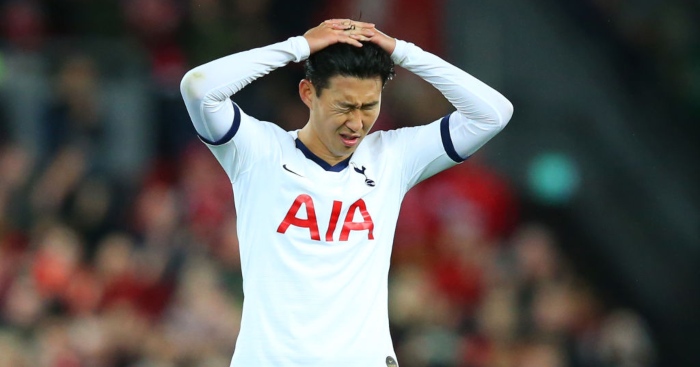 Consequence should matter
Sorry, bit late to this one, but who doesn’t enjoy a good, contentious VAR/referee issue? I know I do!

The consensus, from what I’ve seen/read (pundits on TV, reporters, and my mailbox brothers and sisters), seems to be that Son Heung-min was wrong to be sent off for, what turned out to be, a season-ending professional foul on Andre Gomes. This is based on the fact Son should have been punished on the act and not the consequence. And that the horrific outcome was in no way foreseeable by Son.

Addressing the second point first, Son makes no attempt to play the ball and instead lunges to take out a 1.88m tall, 84kg (thanks wiki) adult male running at full pelt. It is of course within the realms of possibility that that may lead to injury, potentially serious.

But to the point of my mail, I think consequence should absolutely matter. It does in law. If you have a few too many drinks and drive home, getting pulled over by the police on your way, you’ll get a fine and suspension. If you hit somebody, you’re off to prison. Your actual crime, drinking and driving, is the same, but with different consequences. And different punishments. And rightly so. If you get into an argument at a bar and throw a punch that does no serious damage, you’ll maybe get just a slap on the wrist. If that person falls over, hits their head, and ends up dead then you’re going to be serving at Her Majesty’s pleasure for quite some time. Same action, throwing the punch, with different consequences and different punishments. There are hundreds of examples.

In my profession, as a healthcare worker, a patient on the wrong end of a medical blunder has to prove both the error and the harm before they will receive any significant compensation. They have to prove both the action and the consequence.

Somebody mentioned whether all challenges that result in injury should have the tackler sent off, but that’s easy. It would just be for illegal challenges, ie. foul play.

Very difficult to police, of course, with referees not being doctors and able to diagnose and prognosticate on an injury at the time. Also, wouldn’t it be nice if you wanted to substitute your tiring central midfielder. You could tell him to draw a foul, pretend to be injured, substitute him, and have the “offending” player sent off.

But in cases where there is clearly a serious injury as the result of foul play, as in this unfortunate incident, I have absolutely no problem with the referee upgrading the punishment.

I actually did go and check out that Xhaka red card vs Mo Barrow.

He went in studs up directly into the player’s standing leg, late.

You’d have to be on a wind-up to even play at being ignorant of the differences- there’s absolutely zero comparison to the two scenarios except in your head.

On the other hand, there’s a case that Aurier sees red for jumping in the way he did, but frankly I’m not watching it again to verify.
Darragh, Spurs, Ireland

You get a choice when things like this happen.  You can choose to pile on a man who’s at his wits end and add to his misery or you can choose to at least keep your mouth shut and not add to the endless misery.  If you choose to be the sneaky wee twat that runs in to kick a man when he’s down then you should know that you’re much closer to those Twitter trolls than you are to a decent human being whose opinion is worth something.

While we’re at it, you aren’t Xhaka’s employer.  You’re a customer of the company he works for.  If you don’t want to support Xhaka then don’t buy a ticket, you’ve no god given right to one.  Oh, and Joe, I think you’re really bad at your job so I expect to hear soon how you’re resigned and gone to find another job, hurry up and go big boy!
SC, Belfast

Couple of responses
I assume the irony of writing in to brag about how little you care, in the same mail in which you disparage John’s article, and his desire to care, while offering the solution of not caring, is lost on Niall?

And Joe, I don’t know how to break this to you, but just because you support Arsenal, it does not make you Xhaka’s employer.
Néill, Ireland

Conflicts of interest and separation of duties
A lot of people have a lot of different issues or opinions on VAR. Many of these contradict each other, which just proves this is a complicated issue. That said, there is one point which almost everyone makes, and absolutely nobody disagrees with: it is a problem that the VAR officials are the same group of people who referee PL matches themselves.

There are two key concepts that quite obviously come up, due to this arrangement:

Conflict of Interest – this concept is pretty well-known and common sense. “A situation where a person/organization is involved in multiple interests, and serving one interest could involve working against another.” The VAR official has an interest in the accuracy of match decisions and VAR being successfully implemented, but also has an interest in protecting the reputation of their colleague (or superior). This is an issue.

Separation of Duties – this concept is less well-known. “The concept of having more than one person/team required to complete a task, as an internal control intended to prevent fraud and error.” The VAR official is a matchday official who on other weekends is in the reverse role, on the pitch. They will not judge the on-field referees the same way that anyone else would have done, because the duties (VAR and on-pitch refereeing) have not been separated. This is an issue.

Sorry for droning on about accounting/auditing principles, but I think it’s relevant and makes a clear point – this is not a situation which should be allowed to persist. And yet I cannot imagine a scenario where the right decision is taken and VAR officiating is taken away from the PGMOL and their counterparts elsewhere.
Oliver Dziggel, Geneva Switzerland

However, I feel the need to point out the obvious, People in glass houses and all that,

The level of abuse received weekly by James McClean, for the crime of being Irish, and not pinning a flower to his jersey is unparalleled in any other league, Seria A Included, yet he dusts himself down and keeps going, week in week out,

I’m sure some of the things that have been said to him would make even Raheem Sterling Blush, Yet, its ok to be racist to him because he’s white and Irish? And less of a minority than Raheem Sterling?

Niall, Denver and the privilege of not caring
I can only speak for myself as someone in a relatively privileged place but Niall’s refusal to care has boiled my piss. You (and I) might be able to disconnect from politics but it effects the livesof plenty of people and has a tangible impact on football. An obvious (and hopefully uncontroversial example) comes in the selection of locations to host international tournaments and the logistics of rolling them out. That is without going into the broader social implications which come with things like a far right who feel increasingly empowered to racially abuse footballers…

It is a lot easier not to care when you haven’t paid taxes towards a government who are bankrolling a white elephant in the middle of the Amazon or been told to ‘go home’ by a stand full of people.
NorthernSoul (NUFC)

Poppy wearing
I was never keen to glorify war by wearing a poppy, especially as some post-war interventions do not cover the UK with glory, and those who join now volunteer despite this poor history. Nevertheless , the Sgt. Blackman case made me thoroughly ashamed to be British – filming, keeping, and circulating such clear evidence of murder was horrific, but we all must have imagined what really happens in war. However, his subsequent release and the reasons given at his appeal implicate the State in the most shameful apology for his disgusting conduct. It is because of these recent events that “honouring” the Forces appeals less . How sad in any event , that this discussion is taking place on a football site.
Paul Heath

Man Utd shirt colour
I’m quite surprised it’s not been mentioned, but do you win a prize if you guess the name of the colour of the shirts Man Utd were wearing against Bournemouth? The word ‘fleshings’ comes to mind…
Tim Royall GFC