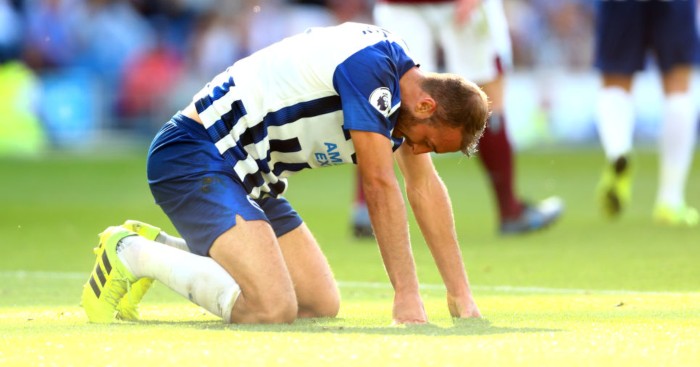 There are two possible reactions to a table that illustrates that Brighton should have scored  – according to xG – only marginally fewer Premier League goals than Bournemouth and Tottenham this season. The first – let’s call it the glass-half-empty position – is to bemoan the finishing of the blunt forwards and declare the whole season a write-off as they do not have the necessary firepower. The second is to presume that Brighton’s luck will change some time soon, and that will inevitably lead to confidence and momentum. Graham Potter has to lurch towards the latter for the sake of his sanity and the fans really must follow him.

In the real world, and in a real table that puts Brighton in 16th rather than mid-table, the Seagulls have scored just five goals while the Cherries have scored 13 and Tottenham 14. Now obviously, Neal Maupay is neither Callum Wilson nor Harry Kane, so that gap is unlikely to be completely breached. But we would expect it to narrow considerably, especially when the quite brilliant Leandro Trossard returns after the international break. Every statistic barring the crucial ‘goals scored’ total suggests that Brighton are a mid-table side in disguise.

This is a team taking more shots, creating more big chances, enjoying more possession and keeping the ball better than that last slog of a season under Chris Hughton. The second of those statistics is the most telling – a rise from 0.89 per game to 1.86 – and entirely disproves the theory that there is not enough creativity in this Brighton side. There are chances being created, largely by Pascal Gross in the absence of Trossard, but they are simply not being taken in big enough numbers.

Forget the Chelsea away game – that was not a fixture Brighton would have realistically targeted for points – but look at Burnley at home; Brighton had 14 attempts on goal and then Burnley equalised with their only shot on target. Had Solly March or Glenn Murray taken their chances, Brighton would now be in mid-table alongside the Clarets rather than one point above the relegation zone. The margins are that small.

This is absolutely not a case for the ‘be careful what you wish for’ brigade and it’s worth noting that Brighton picked up the same six points from the same seven fixtures last season; Potter has not made Brighton worse than they were under Hughton and they should have absolutely no reason to regret their decision.

“It’s a breath of fresh air,” said former Brighton boss Alan Mullery this week when talking about a style far removed from the safety-first, percentage football of the last two survival seasons. Brighton now have a more expansive style that could see them progress over the next three seasons and not simply keep their heads above water. That eventually leads to drowning, as it did for first Swansea and then Huddersfield, the last two teams to finish in the bottom three of the xG table and avoid relegation. You would have backed Brighton to make that a hat-trick under Hughton.

This Saturday lunchtime, Potter’s new Brighton face a broken Tottenham at home and you can get odds of bigger than 3/1 on them being victorious. The statistics suggest that the gap between the two sides does not gape quite so wide as those odds would suggest. Survive the opening 30 minutes when Spurs still have energy and this could be the game that kickstarts Brighton’s rejuvenation season. Just as long as they take one of those chances.