Home Mailbox Why the transfer window should apply to managers too… 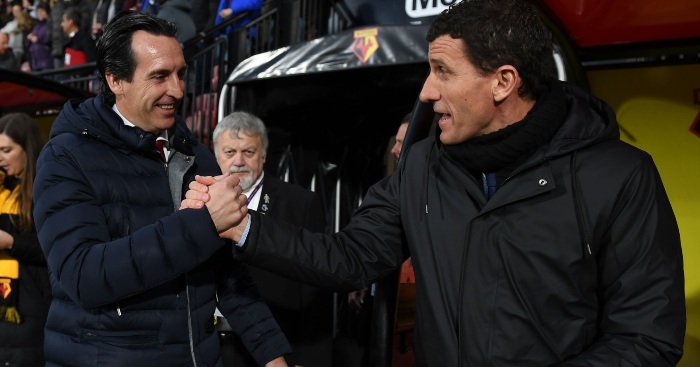 Time for a manager window
I know this has been mooted before, but the situation at Watford has really underlined the need for a coach/manager hiring window to match the transfer window.

Watford fired coach Javi Gracia four games into the season because, according to “reports’, he had “gone flat”. So they boot him out and re-hire Quique Sanchez Flores. I’ll leave aside what the hell Flores was thinking, other than knowing he’ll get another contract pay-off when he gets fired again, but it’s ridiculous.

Let’s say that Watford can fire Garcia, but must fill his position from within – promote the U-21 coach, appoint Garcia’s assistant as the interim coach, elevate the splendidly-named Football Secretary Gayle Vowels, give the ball-boy a crack at it, haul the vociferous season-ticket holder out of the stands and hand her the keys, whatever, but – those are your options until January.

It might give a knee-jerk a mid-jerk pause, no? If you don’t trust the person you hired to complete a half-season without completely f*cking everything up, then you have a policy problem. Not unusual in the Premier League, I know, but you need to set your sights to the long-term success and execute. A stretch for a lot of clubs, but look the poster children – not the Top Six, but the Middle Six who work within the parameters they are given and work wonders. Step forward Eddie Howe et al.

Radical thinking, I know. I’ll go and stand in the corner for voicing some common sense.
Steve (still not the Steven that Oliver Dziggel thinks I might be, thank god), Los Angeles

Why VDS would swap Ajax for United
Flange asked why Van der Sar would go to United… off the top of my head:

Flange says Ajax are in the middle of a project, but are they really?

They still have quality in their team but they couldn’t even make it to the end of the season before the vultures came in for de Jong; it was well known even as they walked out for the Champions League semi final that de Ligt wasn’t going to still be there this season. Guaranteed if they have another season like that (which they probably won’t) and even if they don’t, their remaining top players will get picked off. I would say that’s what their “project” really is. It’s not really about building a great legacy – it’s about training them up and selling them for as big a profit as possible. Hell, they didn’t even keep their captain and new talisman until his 20th birthday!

There’s nothing wrong with that, but if van der Sar really wanted a “project” to build a great team – there’s no bigger “project” in world football than Manchester United right now!

United are desperate to get back to the top table of football and have proven they’re willing to spend big to achieve it. They have spent badly, but that’s what Van der Sar would be there to sort out.

From a sporting perspective, United would be a great job for an ambitious director of football.

There are countless possible reasons that he may not want to go like family, wanting to stay in Amsterdam, being perfectly happy with his current position, or considering a Director of Football role a step down from his CEO position. I’m not saying that anyone would go to United given the chance but it would look like a good move from a sporting perspective – being a director of football is a long term project, so United’s underperformance wouldn’t be that off putting to a strong candidate.

Come to think of it, he may not think it’s an appropriate role for him and that he doesn’t have the best skill set to be a director of football. He’s been Ajax’s marketing director and CEO but never a director of football. Ed Woodward may look at Van der Sar’s CV and money making prowess and see a kindred spirit, but it’s not necessarily what the position calls for!
Andy (MUFC)

Send them home
Great question from Alay N15 Gooner
which EU player from your team would you miss most if they were all suddenly asked to Leave for some unfathomable reason?
It’s a toss up between Virgil VanDijk and Andy Robertson….
Marcus(Im white so I’m an ex-pat) Paris

…Alay, Shall we start with Shkodran Mustafi…. I think we can all agree on that one ?!

Maybe we can make a case against Xhaka as well. He’s Swiss so not in the EU and they seem to get on just fine trading with the EU with no physical borders… strange one that isn’t?

Drinkwater versus Iron man
Congratulations on the headline of the Drinkwater news.
No-one would be fact enough to hit on the Gravel voiced man.
Can’t stop imagining Sean dyche being the bouncer at the club where Drinkwater and Ntlhe were thrown out.
NS

You are the VAR
​To Burger’s Bob, I don’t know the procedure but it seems to me in the specific scenario you describe, the goal should stand. It seems to me like an advantage situation where refs will let a play go on despite a foul, except in this case the VAR team will rule after the fact.

They can possibly even pull it back for a pen if it doesn’t lead to a goal.
Yaru, Malaysia

Matchfixing?
Quick question during international break. During the season teams we’ll field weakened teams in both the league cup and FA cup. Some of these teams will scrape through, while others will intentionally lose. Is throwing a match not dangerously close to match fixing?
Jack Cavan ( Man u will make top 6)